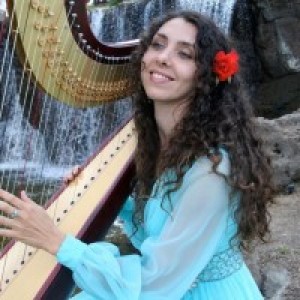 Be the first to review Harpist Tatyana

Tatyana is a professional, classically-trained concert harpist from St. Petersburg Russia, devoted to the magic of the harp, delighting my audience with a varied and distinctive repertoire, including music from the Baroque, Classical and Romantic periods; traditional Jewish and Christian melodies; and an expansive selection of contemporary favorites including New Age and spiritual inspired music.

Tatyana is influenced by the biggest classical composers of the historic Europe, combined with modern and contemporary music styles that range from rock and pop over Middle Eastern and Latin influenced music.

Tatyana grew up in St. Petersburg Russia in a musical family. Her father is a professional tenor opera singer who inspired her until today to pursue a career as a professional creative musician . She started as a talented young harpist and quickly became a delegate to the National Youth Harp Competition in Moscow, Russia. As a highly gifted musician, Tatyana attended the Ohtinsky Cultural Center Music School and the Rimsky-Korsakov Music College and graduated with a Master’s degree from the world famous St. Petersburg Rimsky-Korsakov Conservatory of Music in 1998.

After Tatyana moved to the United States in 1999, she received her second Master's degree in 2000 and worked on her Ph.D. in Music and Harp at the University of Arizona where she studied under Dr. Carrol McLaughlin.

Tatyana has done recordings at Capital Records in Hollywood plus several other recording sessions. The HarpFusion 25th Anniversary Spectacular CD includes her performances along with some of her own arrangements. She performs each year professionally as a solo harpist for all kind of events and occasions including performances for popular music groups such as The Band Rouge and other pop/ rock bands. Tatyana has been performing on TV such as most recently on one of the 2010 “Dancing with the Stars” Season 11 episodes.

Besides performing as an artists, Tatyana composes and arranges music for popular music groups as well as for her own solo releases.

Tatyana works as a private music teacher for harp and piano since 1997. Several of her students have become very successful harpists and piano players that now perform professionally.