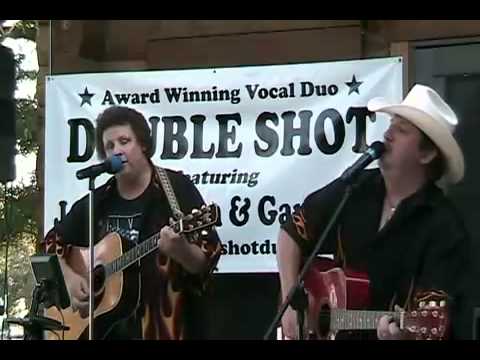 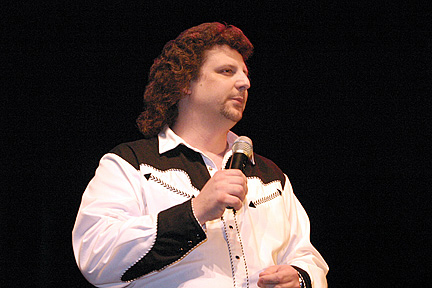 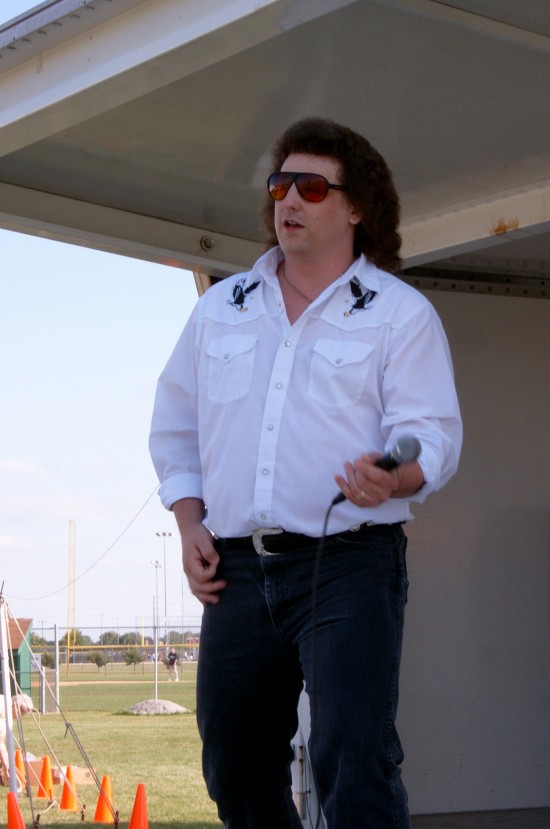 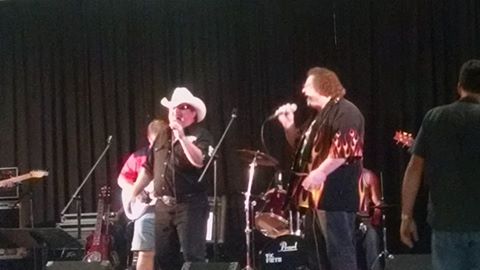 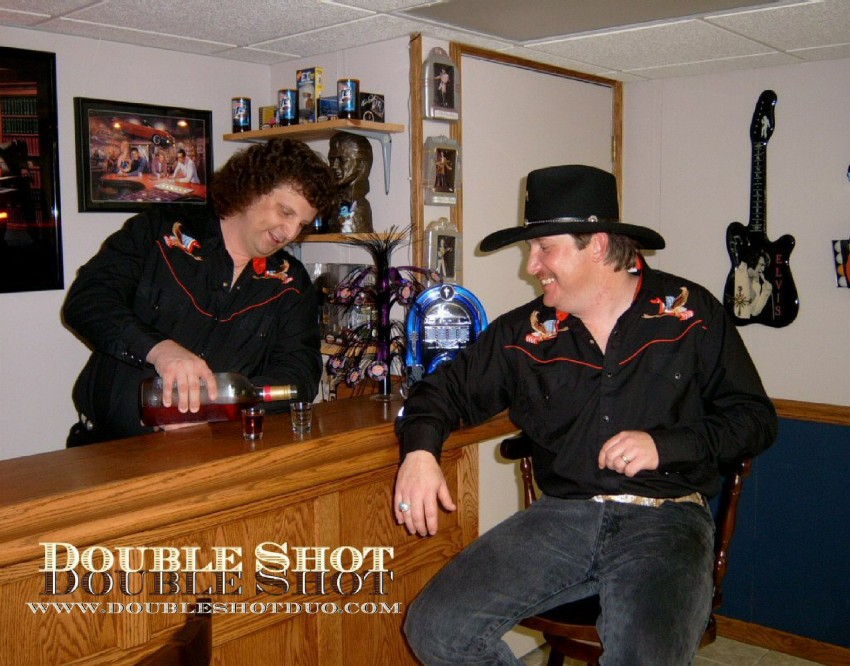 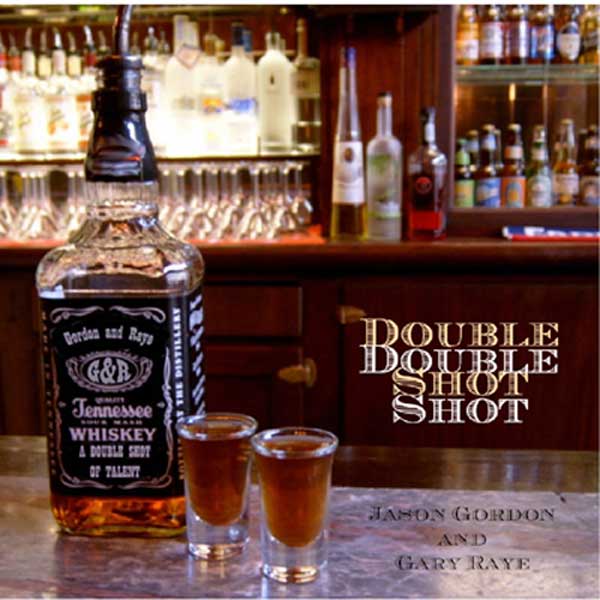 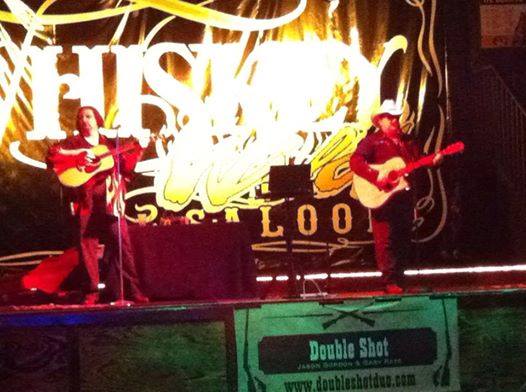 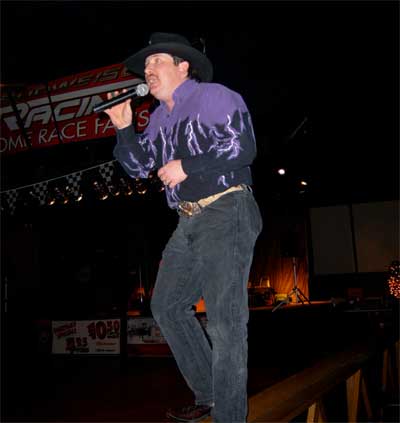 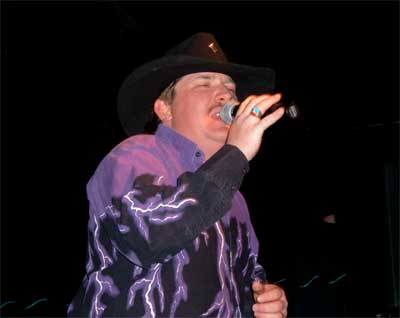 Double Shot is the collaboration of two very talented entertainers which gives the duo a double shot of talent. Their voices blend in such way that it can only be described as magical. Jason has opened shows for Kevin Sharp, Trace Adkins, Joe Diffey, and more and Gary has performed his "Elvis Experience" tribute show throughout the country. In March 2005, Double Shot was named the North American Country Music Association International (NACMAI) Traditional Country Vocal Duo of the Year. Double Shot performs 50's,60's,70's rock, classic & modern country all mixed in with vocal impressions and a bit of comedy. Double Shot is a duo using prerecorded tracks and acoustic guitars on occasion.

Wow. We had Gary for my aunt's 90th birthday celebration, which was a resounding success.
If you are looking for a parody of Elvis, Gary is not your man. While the show was not devoid of humor (Gary does not appear to be a man to take himself TOO seriously), this was a reverent representation of Elvis' art. Gary has a great voice and works a crowd like a master.
We had some special requirements because I have a disabled cousin. Gary took them all in stride and offered practical solutions. He is the consumate professional entertainer.
The party was an unqualified blast. Gary delivered way more than what was expected. I highly recommend him for any gig you can dream up.

Double Shot features Branson Star, Jason Gordon and nationally acclaimed Elvis Entertainer & Vocalist, Gary Raye.
Reviews:
We had hired Double Shot for my parents 50th anniversary at Lake Bloomington, IL. These guys showed up hours before the party started to ensure they had everything set up right and all equipment was operational. I thought Gary and Jason had the most amazing voices....The crowd had a blast and my parents loved them as well as the rest, We all danced and had a fantastic evening!!! As of today we all have sore feet from dancing so much :) They come highly recommended by me!!!!! FANTASTIC!
- Diane P

We, all had a great time last night at Jimmy O's bar & lounge where you and Jason gave your last performance together (AWESOME). You guys simply blew the crowd away with some of the best in entertainment that I have seen perform here or anywhere else, and your singing was just simply out of this world. Your request taking and all the fun that you guys had with the audience was one that would be hard to put into words. I don't think that anyone could put songs into reality any better than you and Jason did, with all the Elvis Presley, Conway, John Conlee, Grease, and many others, what a night to remember it was one of the best I have ever had the pleasure of seeing. Even as the night progressed, you kept everything business minded with all that you did and sang. I would recommend either one of you guys to perform for any event, and or show. All, the feedback that I got at the bar was one I remember for a long time, one lady told me I never stay out anymore and listen to a band, or entertainer however this one was far out there for me (meaning one of the best times she has had in 20 years). I will try to bring you back Gary as Elvis, and just simply entertain again in the very near future, What a PERFORMANCE you guys gave. It was just like the night flew by so fast, it was really a pleasure to have seen your last show together. I think it might have been the best show that the two of you guys ever did, by the way you performed and got out with the audience. Another guy came up to me before I left, and stated to me that Gary should be in Vegas with his Elvis Presley impersonations because they were just simply too good for such TALENT that you have. You guys really gave it your all."
Thanks Gary and Jason, from all of us at Jimmy O's Restaurant & Lounge.
Gene (Entertainment Mgr.)

Table for equipment or merchandise.