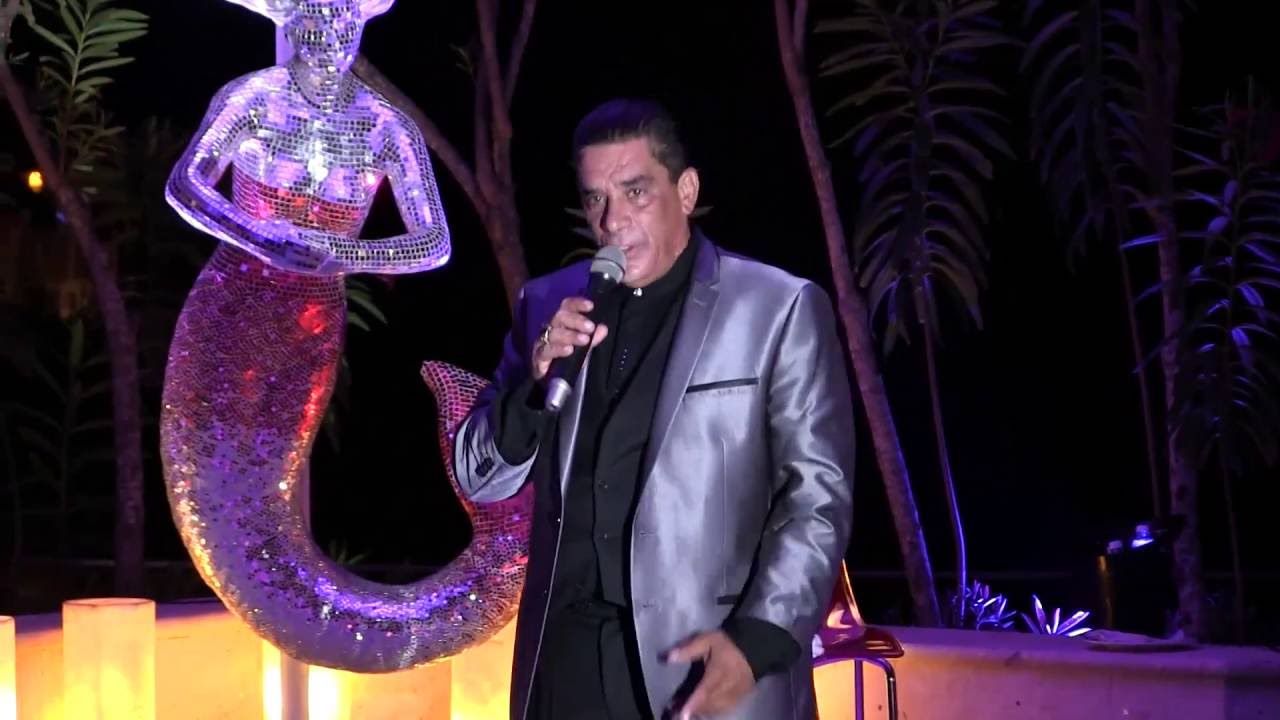 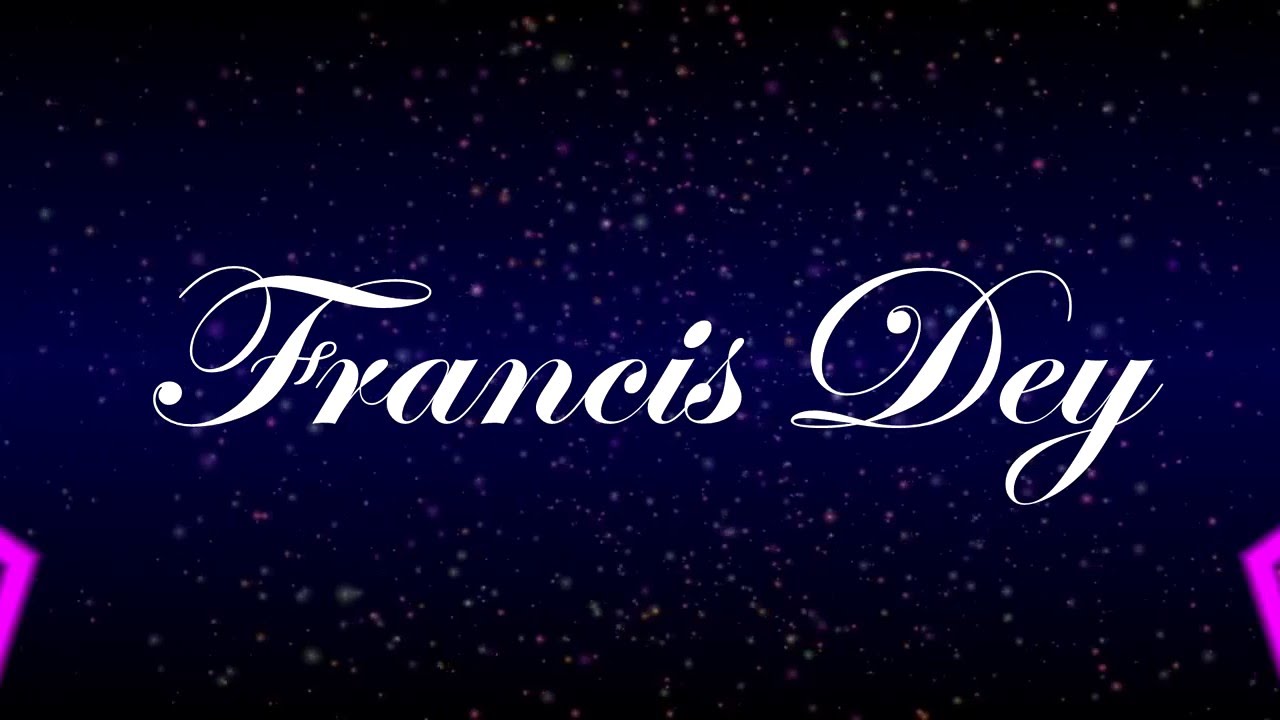 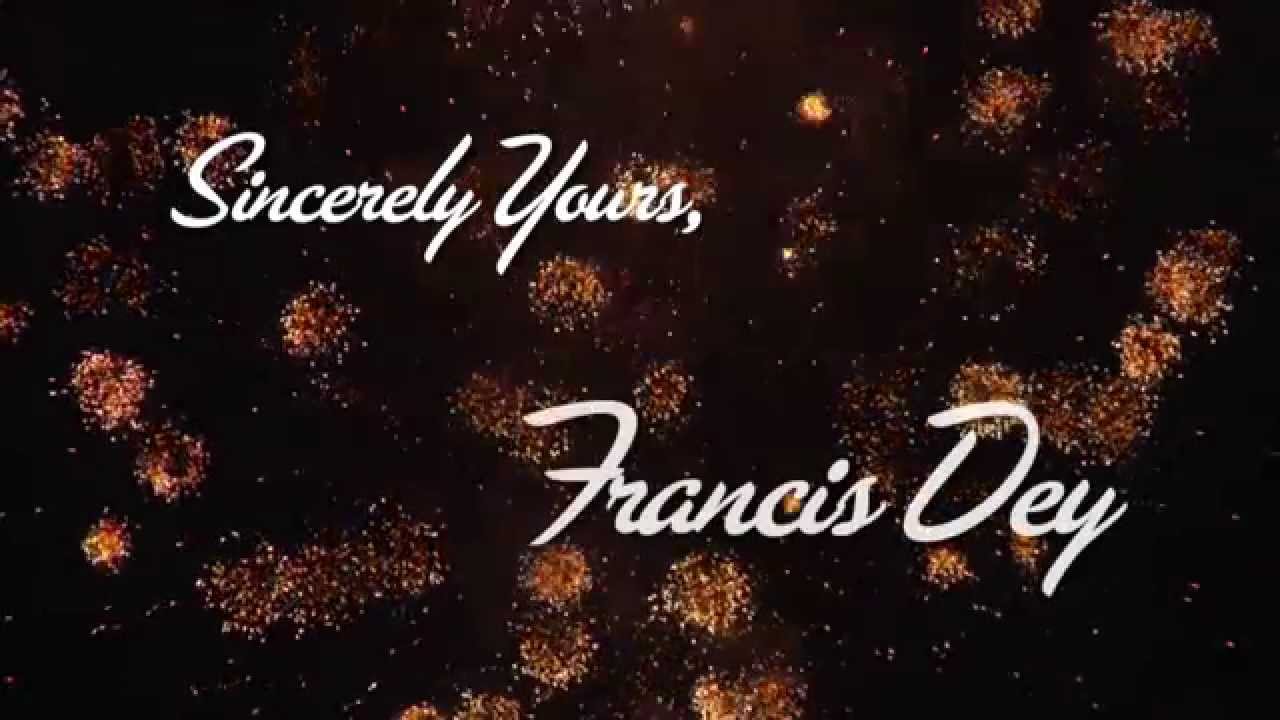 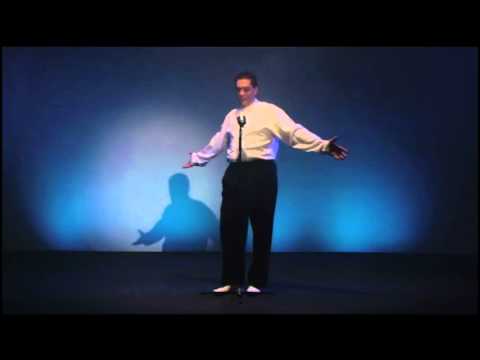 I Gotta Be Me- Francis Dey 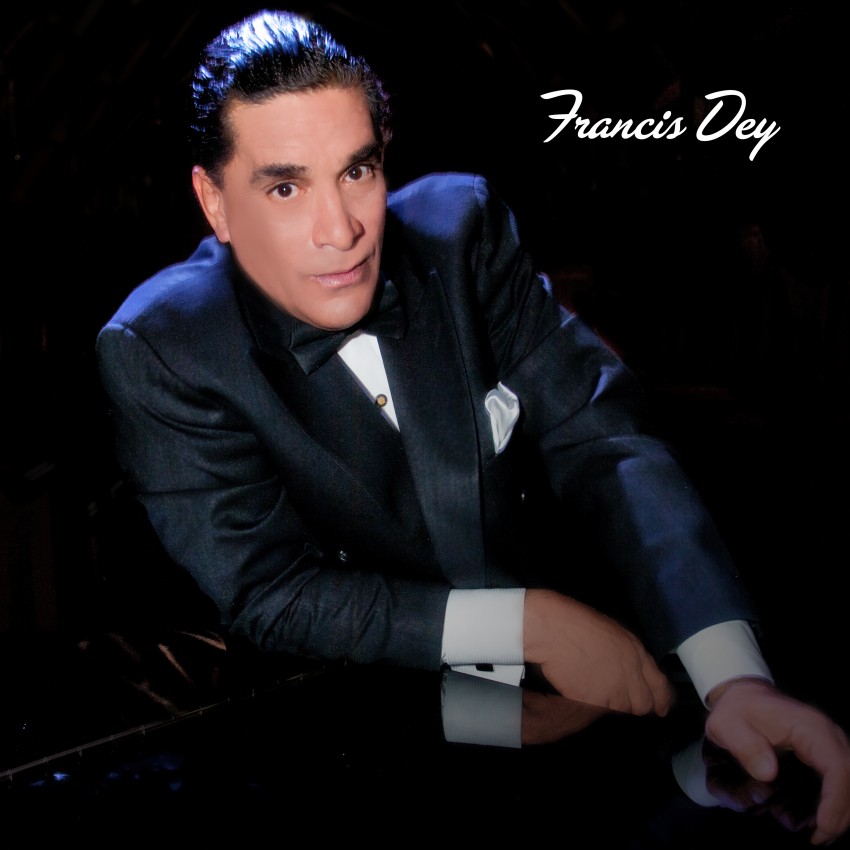 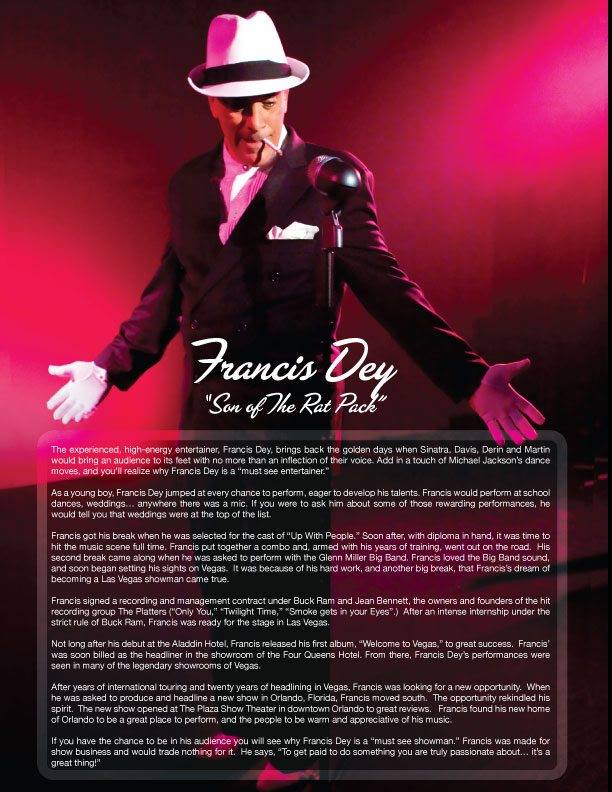 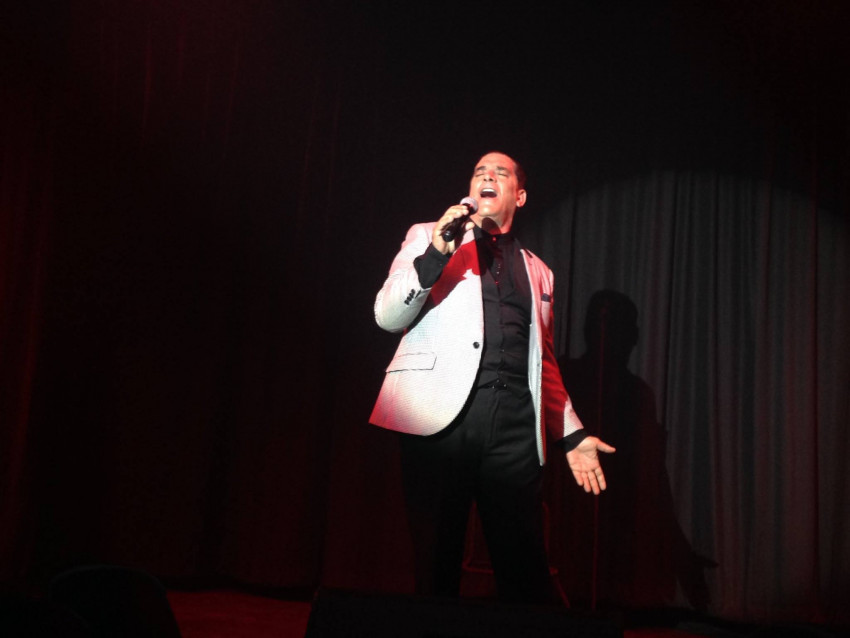 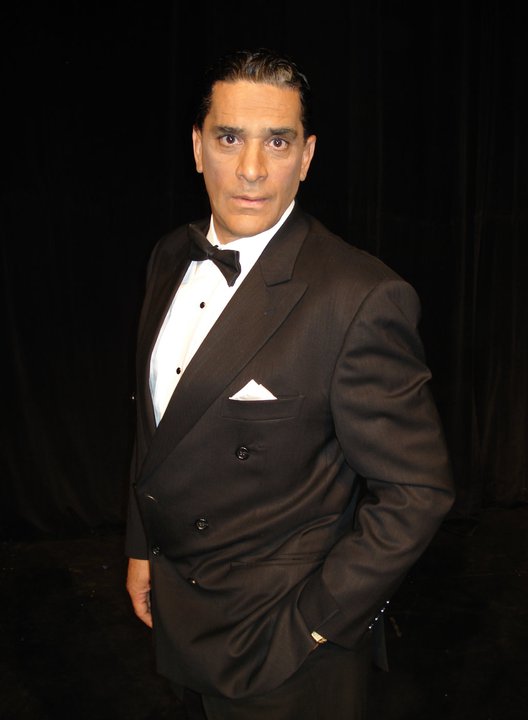 Francis has toured with "The Platters" and has performed with many greats including: Sammy Davis Jr, Tony Bennett, Drifters, Michael Jackson, K.C. and the Sunshine Band, Garth Brookes, and more. Francis has a repertoire of music including: Jazz, Oldies, Dance music from your favorite decade. Francis has it all, whether you want to mellow out or hit the dance floor. Francis customizes his music to fit all venues which include: small scale events(50+ people) to large scale events (1000+ people), or any special event. He is open to booking any events where professional entertainment is needed: New to the east coast, but Francis' is willing to travel any where his talent is wanted.

Be the first to review Francis Dey

You can expect Francis to perform at a professional, national/international level. If your just interested in a garage band or run of the mill local band/performer, than your looking in the wrong direction. Mr Dey is not only a top vocalist but he is professional entertainer, trained dancer. Depending on the type of venue, Mr Dey can have you on the floor dancing, swooning with his ballads, reminiscing to memories and old flames, or singing along with oldies and current hits and everything in between. Mr Dey will be impeccably dressed. Depending on the venue, he could be wearing a tux, beautiful suit, cool beach linen attire or anything in between. His personality and charisma captures the audience immediately and draws them into the moment. He offers a one man show and is self-contained with state of the art equipment and studio recorded sound tracks, giving the sound of 12 piece band/orchestra. This arrangement makes it very easy for set up and tear down. By having studio recorded professional sound tracks, Mr Dey is able to offer his performances at a cost that is thousands of dollars less that when he travels with a band/orchestra. Mr Dey can provide a band or orchestra if needed but would need a minimum 3 months notice and additional fees would be added. Mr Dey realizes that the venue is yours, and he is flexible to customize the event for you and to make it a performance you won't forget.

The Story of Francis
Francis Dey is the epitome of a “Stage Performer.” Dey delivers the authentic, passion-filled vocal phrasings of a legendary concert singer. His electrifying stage presence, and “born-to-perform personality,” rivals the very best in the business. Francis Dey personifies great crooners like: Frank Sinatra, Dean Martin, Tony Bennett, Sammy Davis Jr. and Bobby Darin. At the same time, Francis can switch it up and take you to your favorite decade of popular hits you grew up with. If you desire a good variety, this is Francis' specialty. He can customize his show to please the most discerned listeners, to find songs that will appeal to all audiences.
His album, “Sincerely Yours,” is a testament to the authenticity of what quality music is really about. The album features a genuine, New Orleans based, horn section, carefully selected classics, and an original, “Kill Me Kindly,” written by Eric Chesher, (formerly of Capitol Records). Paying homage to the rat pack, Sincerely Yours is available on iTunes. A lifelong entertainer, Dey’s landmark career is reaching new heights.
Dey’s superb talent, and intense passion for the art of live performance, have kept him in demand, and on tour. He has performed on the legendary stages of Las Vegas’ finest hotels: Caesar’s Palace, The Sands Hotel, The Flamingo, The Aladdin, The Golden Nugget, The Fremont Street Experience, The MGM Grand, The Four Queens, New York, New York, and others. The story of Francis Dey’s first big opportunity was under the management of the late, great, Buck Ram, & Miss Jean Bennett. Both Ram and Bennett were founders of the original, 1950’s hit group, “The Platters” (“Smoke Gets In Your Eyes,” “Only You,” “Twilight Time.”) Other performances include: stints at the famous Playboy Clubs across the U.S., coast to coast tours in Canada at the world-class Canadian Pacific Hotels & Resorts properties, to the Royal York’s Imperial Ballroom in Toronto, and the Palatial Empress Hotel in Victoria, British Columbia. Tours also included dates in Ottawa, Vancouver, British Columbia, and a special invite performance at the Montreal “Olympic Games.” His overseas appearances have included performances in: Tahiti, China, Japan, Australia, South Africa and Europe.
Dey’s theatrical performances include: “West Side Story,” “The King And I,” “Bye Bye Birdie,” “Oklahoma,” “Once Upon A Mattress,” “Guys And Dolls,” “South Pacific,” “The Music Man,” “Fiddler On The Roof.” “The Sound of Music,” and “Jesus Christ, Superstar.” Francis loves theater, and it is his on-stage magic that has captivated hundreds of thousands of fans, musically and theatrically, worldwide.

Self-Contained performer. Artist brings his own state of the art sound system and lighting if needed. Venue must provide electrical outlets for equipment. Any additional equipment requirements are based on each individual venue.