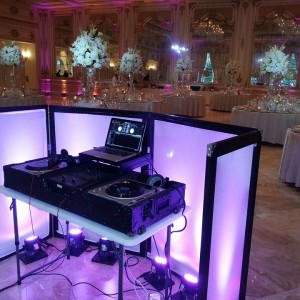 DJTonyChen Inc. is the new way in Mobile DJ Services in South Florida. The quality of our service and the products is unlike any other DJ provider you have ever encountered.
We pride ourselves off using only the best quality sound and lighting equipment in the industry and our DJ's have many years experience in all genres of music. No matter what crowd you are trying to impress, DJTonyChen Inc. can cater for them.
It doesn't matter what sort of event you are planning, as long as you want a great atmosphere and an impressive sound system with a professional DJ mixing the right tunes to get people up dancing. We doWeddings, Birthday Parties, Corporate Events, School Parties, Mitzvahs and Clubs

Had him for my dad's 60th birthday party. He played wonderful music, took many requests, and was very professional. Would definitely hire him again.

DJ Toy is simply amazing and just plain fun! Knows how to keep the party going and very professional! Looking forward to my next event with him & his crew!

Tony was the perfect choice for our New Year's Eve "No Resolutions" party at Camana Bay. The dance floor was full the entire night because Tony knew exactly what the crowd wanted to hear. Tony was extremely professional. I will definitely hire him again!

We hired Tony for a family affair. He asked what music we wanted and I gave him a list. A couple of people told me not to expect too much -- they had hired DJs who did not play what the host wanted, only what the "DJ wanted. But Tony was not like that. He honored my play list. And he kept the volume appropriate for different parts of the event. He helped make our party great! Thanks, Tony.

Your welcome William. I really enjoyed playing for you and your family. Thanks.

Played our Wedding and brought him back for another gig

We had the pleasure of having DJ Tony Chen play our wedding. He was referred to us from a few friends whom also use him. He was very courteous to us when we asked him what we wanted. We found him very professional with his job and the way he treated us. He was the cherry on the cake at our wedding and made it that much more special. Everyone at the wedding told us after how good he was and asked for his card. We actually used him on another occasion and plan to do so again in the future, along with some friends whom now have contacted him. We keep in contact with him and now call him a friend to us. We have no problem in referring him to anyone.

djTonyChen discovered his love for music as a young child listening to records at his best friend’s house in Montego Bay, Jamaica. At the early age of 13, he participated as a dancer in the Power Force Theatre Group (a local non- profit organization created to teach education through drama and dance) reinforcing Tony’s appreciation for dancing and particularly music. This further fueled his desire to choose the path as a Professional Disc Jockey as his career.
At age 19, he landed a job at Sandals Resorts as an Entertainment Coordinator and quickly became the top performer of the entertainment staff. Two years later he was offered a job at Margaritaville Montego Bay as an MC/DJ, later promoted to Entertainment Manager for that property and then gaining more experience at Grand Cayman as the Entertainment Manager of Margaritaville’s newest and largest property. Tony Chen quickly became the Island’s most requested entertainer for Social Celebrations and Corporate Events. With many years of experience, his passion for technology and dedication to staying cutting edge, Tony added Video Jockey to his list of many talents, mixing Music Video’s to enhance his events.
djTonyChen is an International Entertainer that travels all over the World offering multi-talented skills as a Master of Ceremonies, DJ and Video Jock, his ultimate goal at every event is to fill a dance floor while spinning his open format of all genres, including Hip-Hop, House/Electronic, Latin, Reggae, 50’s, 60’s, 70’s, 80's & 90's, Rock, and he can even mix Country Western.

We pride ourselves off using only the best quality sound and lighting equipment in the industry and our DJ's have many years experience in all genres of music.