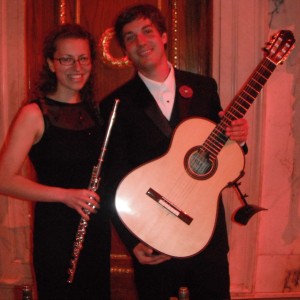 Duo D'Amoore is the husband and wife duo David and Amelia Moore! Classically trained at the Ithaca College School of Music, they are available for performance in and around the Baltimore area. David plays classical guitar while Amelia plays flute. Together they cover a wide variety of styles, and their arranging skills allow them to play ANY song you can think of. All you have to do is ask! Having performed the music at their own and many other weddings, they have the experience and training to make any event a memorable occasion. David has performed in recitals, restaurants and backyard parties while Amelia has been a Church musician for over 10 years. Have them perform for your next event.

A charming addition to my 80th birthday celebration

What a treat, and what a surprise, to have you at my home for my 80th birthday. You played beautifully. After everyone left, I sat down in a quiet room to listen to your CD. I especially loved the Bach pieces, played with great sensitivity and style. I will hope for the opportunity to recommend you to friends in the future.

Expect a wonderful performance by a couple tied together by music. Duo D'Amoore aim to please, and are aware of the difference between providing ambience, and providing a concert! As professional musicians we will fit the atmosphere you are aiming to create.

David Moore was born in France and moved to the United States at the age of 7. He began his musical training on the electric guitar while in middle school, and by high school was studying with faculty of the Peabody Conservatory. After high school, David attended Ithaca College, where he graduated with a Bachelors degree in Music Performance. While at Ithaca, David met his lovely wife, Amelia.

Amelia Moore is a native of Endicott, NY. Having studied a wide range of instruments while in grade school, Amelia decided that the flute was what called to her the most. While in high school, Amelia was in All-State Symphonic band, and was also drum major in her schools marching band. Amelia graduated from Ithaca with a degree in music education.

Together they form Duo D'Amoore, and they hope to add some amore to your next event! They have performed in weddings, restaurants, parties, church services and festivals. With their classical training they are able to arrange any style or song for their duet, so if you have a request, by all means ask. They currently perform in Baroque, Classical, Tango, Pop, and Religious styles.

Duo D'Amoore provide their own amplification, music stands and only require an electrical outlet in the event you would need them to be amplified. 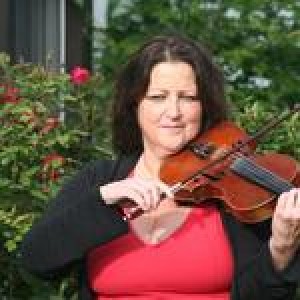 Kris Y. said “1 month of extra lessons supported my beginner violinist to an intermediate group within a school year. Ms. Stacy tuned into my child's strengths and…”

Kim K. said “Zhenya was a wonderful edition to our daughter's wedding day! Couldn't have been more perfect. Highly recommend.” 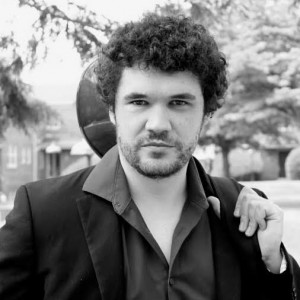 Rick L. said “JP and his colleagues are outstanding musicians and professionals. I knew when I listened to performances on YouTube that it would be a great experience,…”

Mike said “Thank you Stephanie for making our day that much more special. Your violinist skills/ talents made our wedding event to be remembered and envied. It was…”