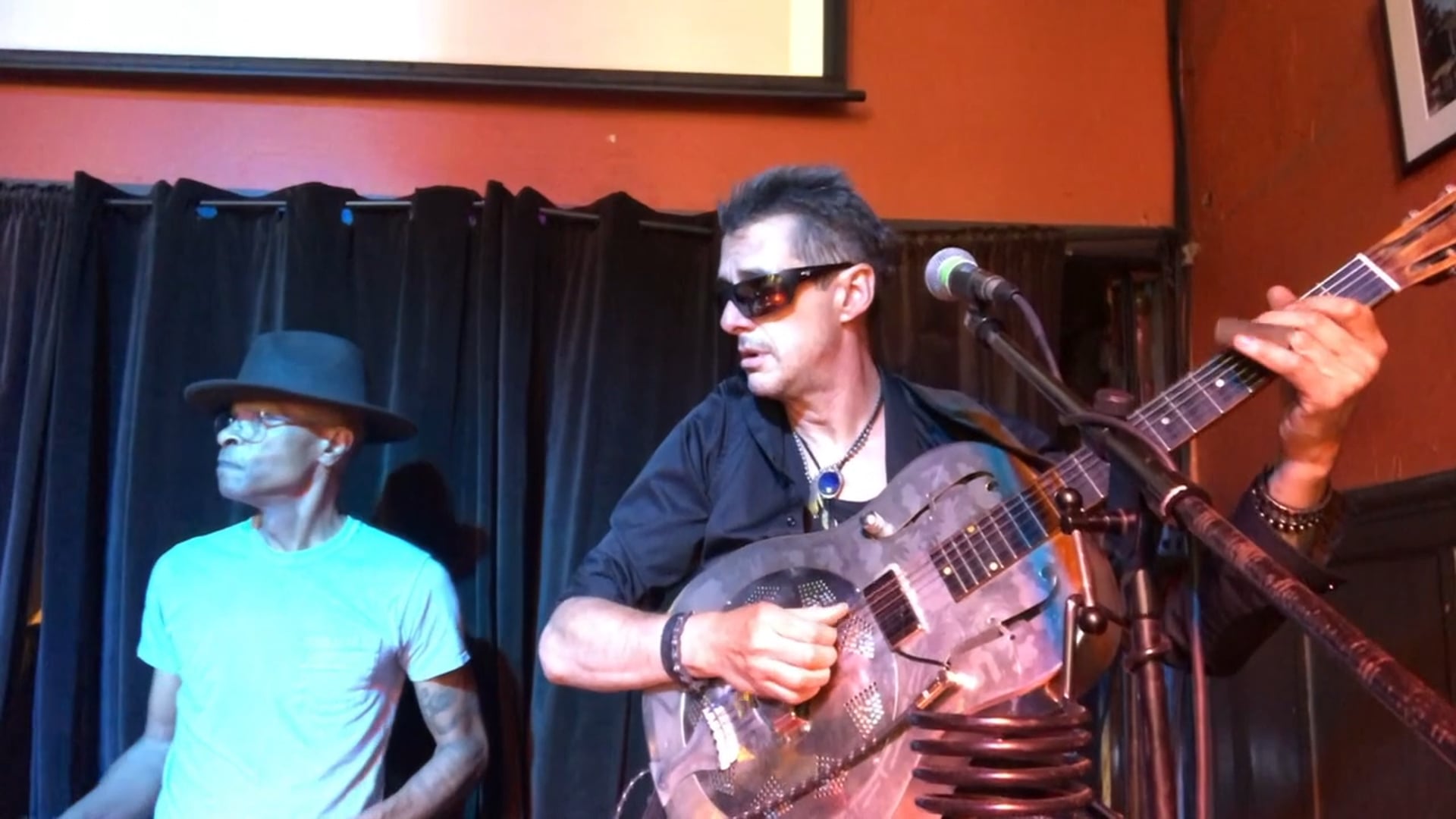 Take Me to the River –Al Green 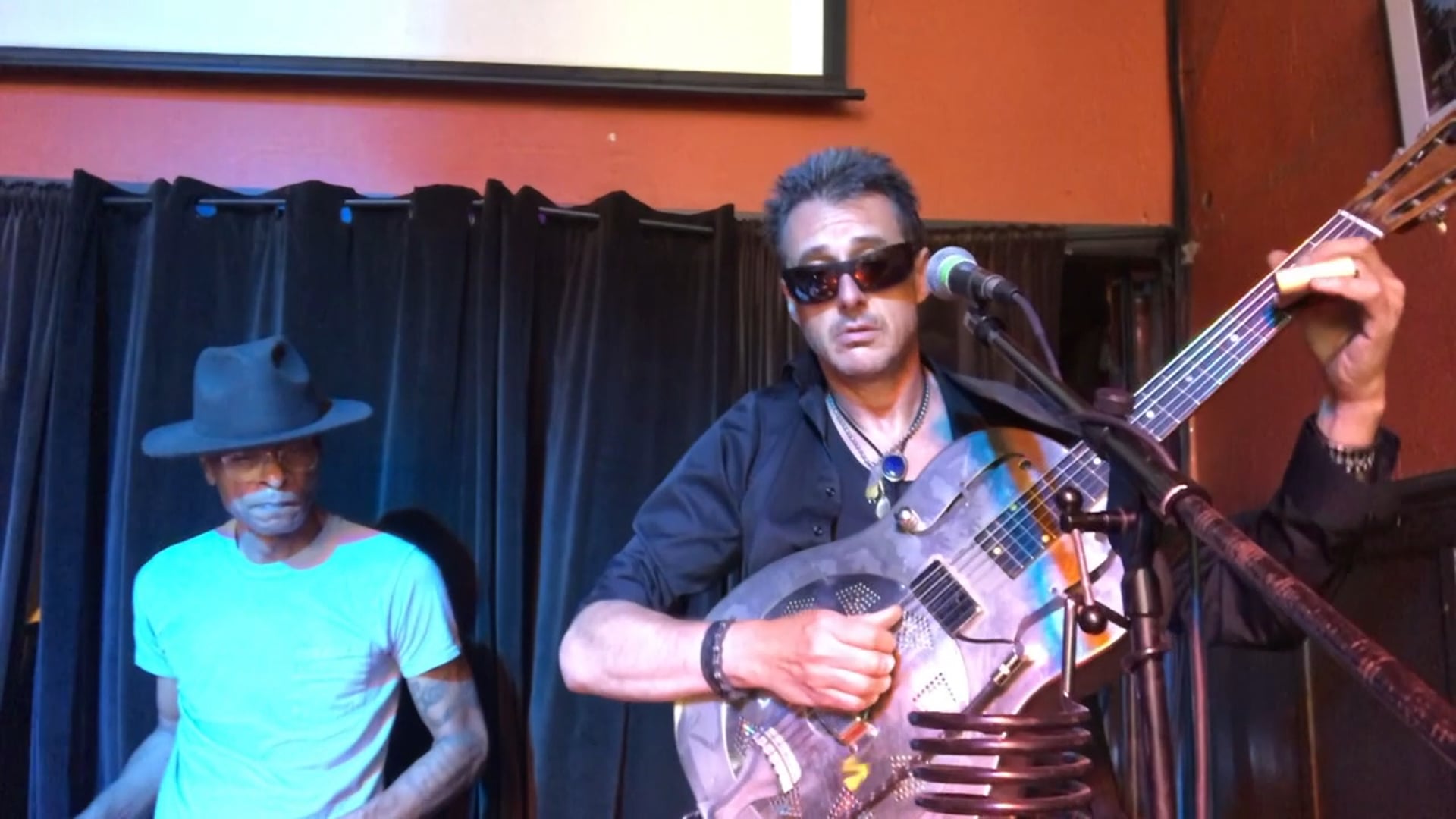 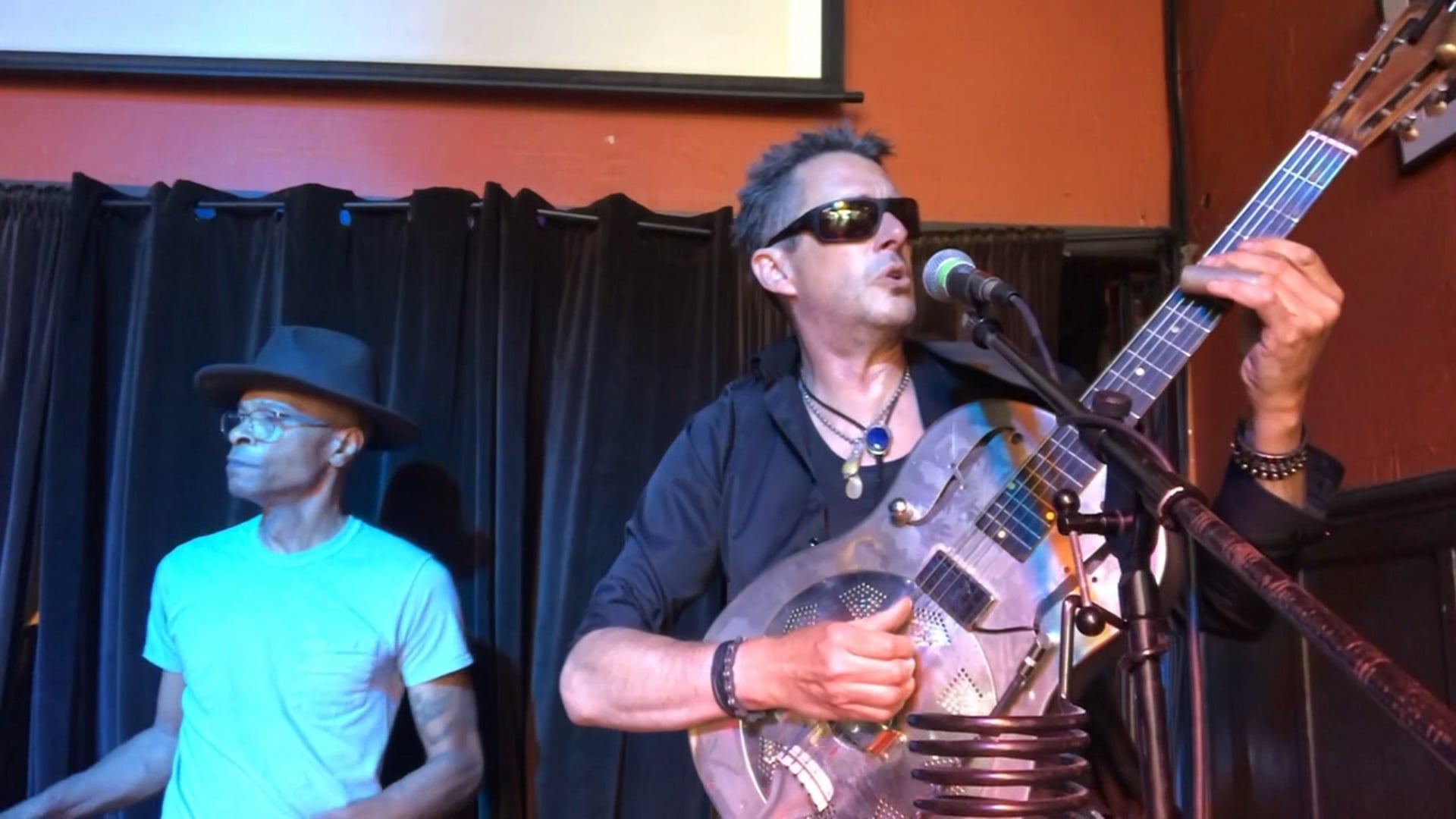 Use Me Up –Bill Withers 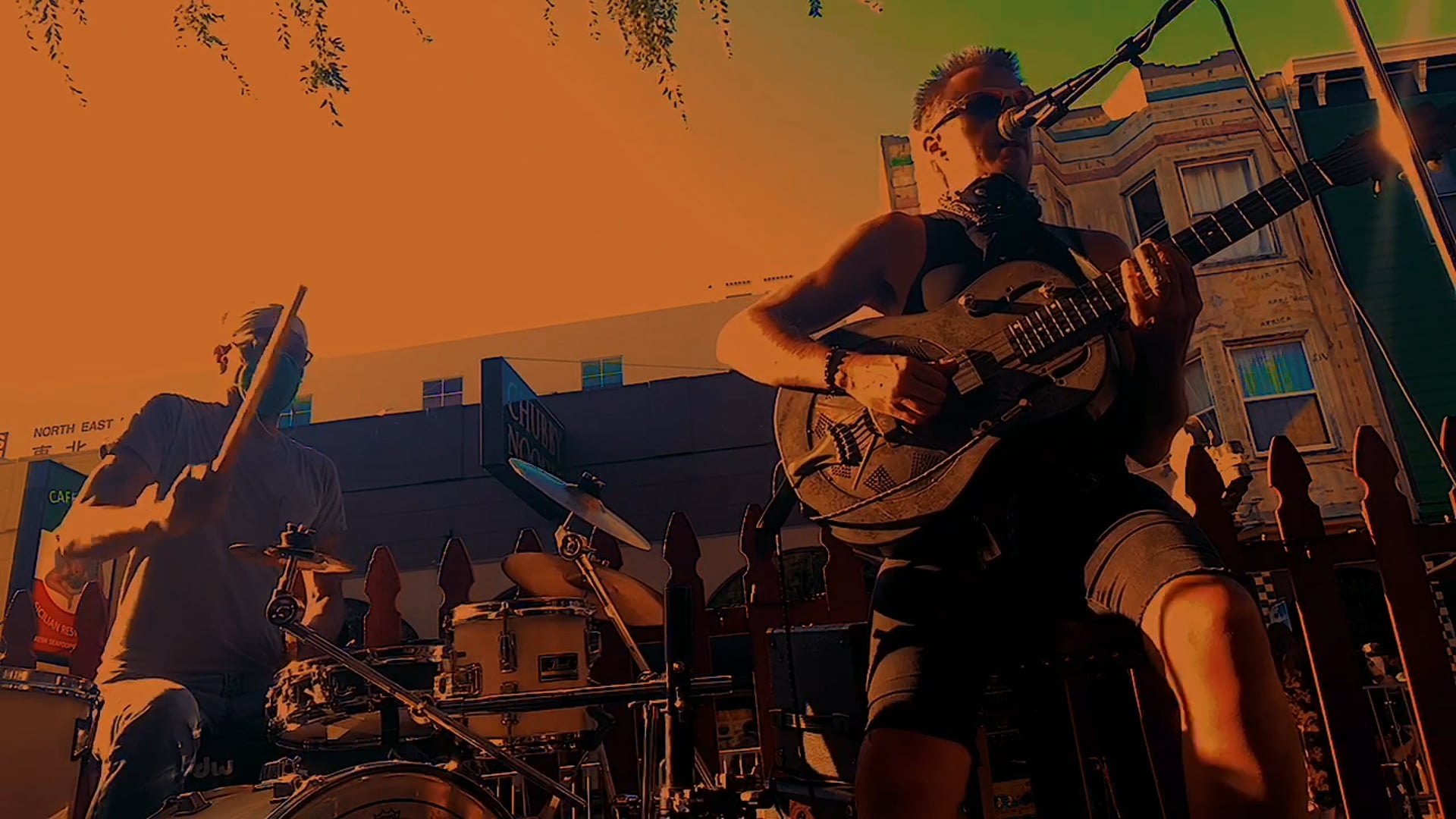 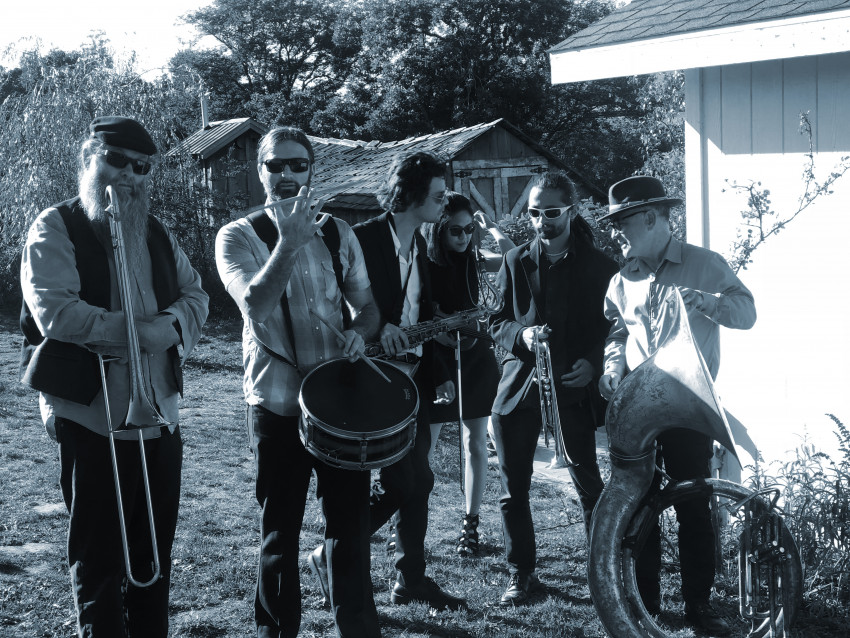 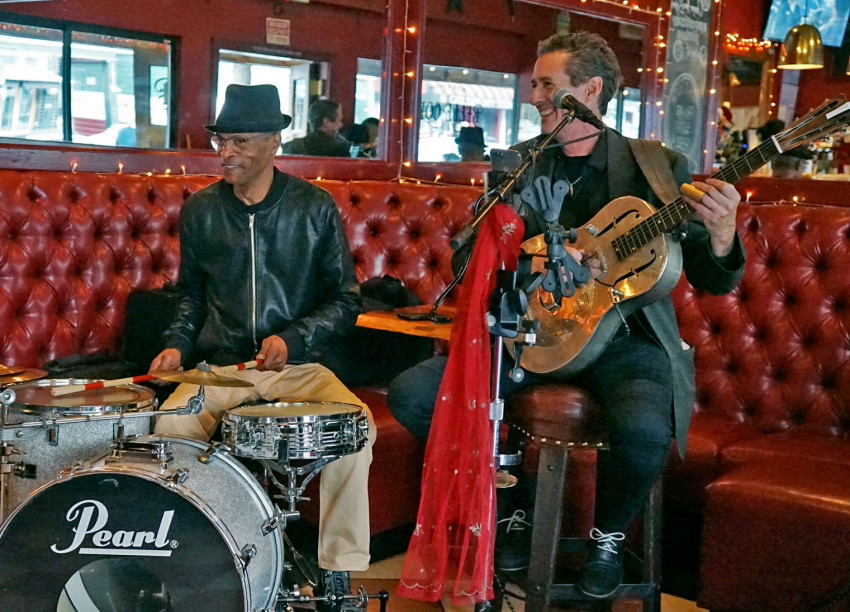 somebody made a funny. 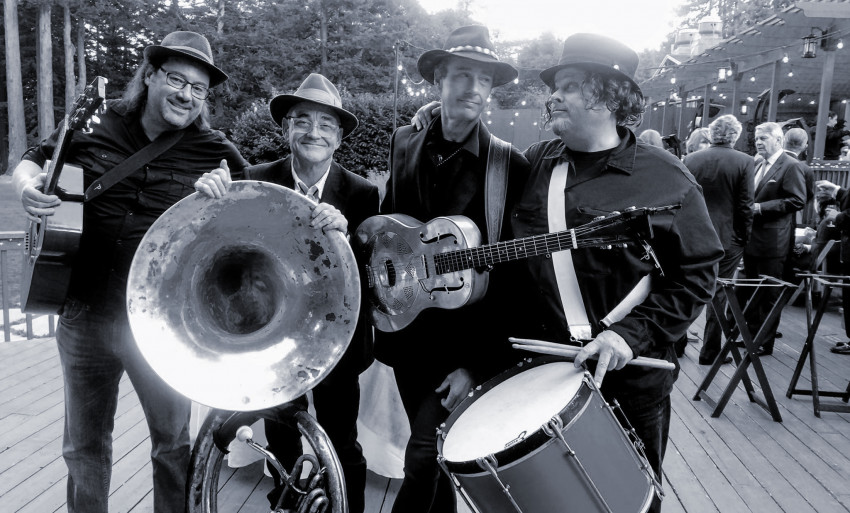 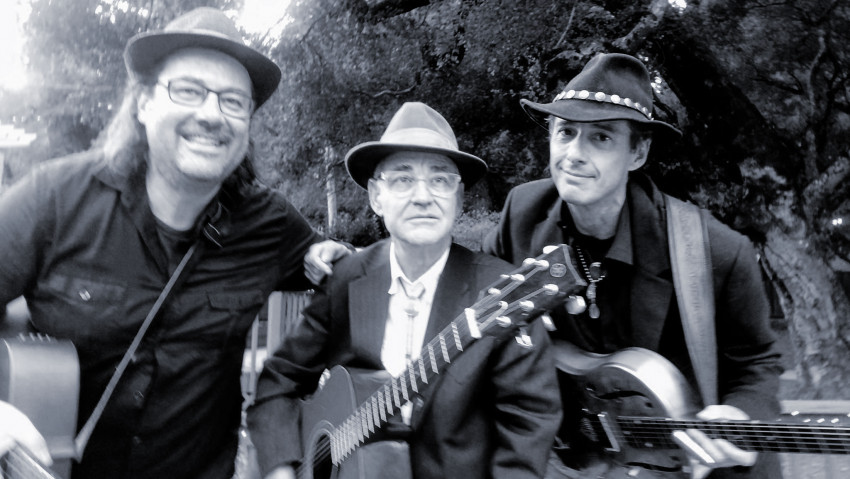 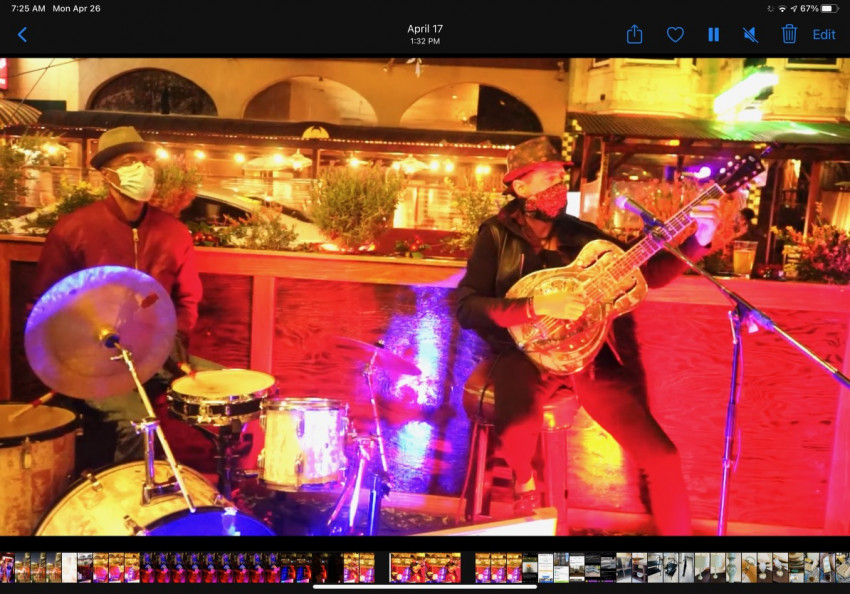 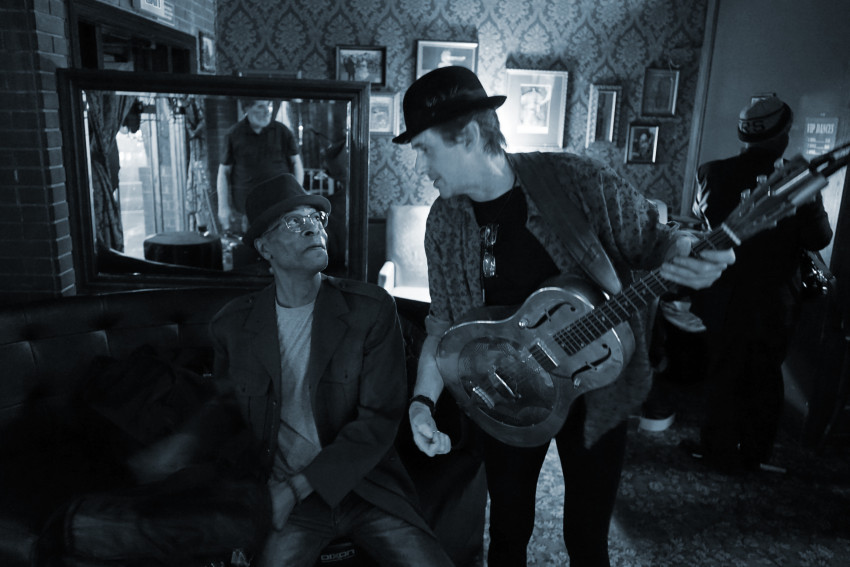 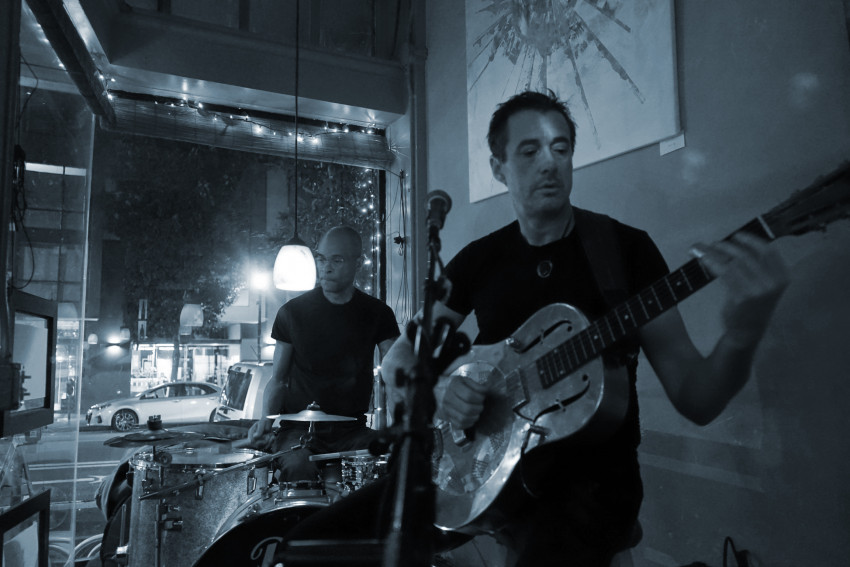 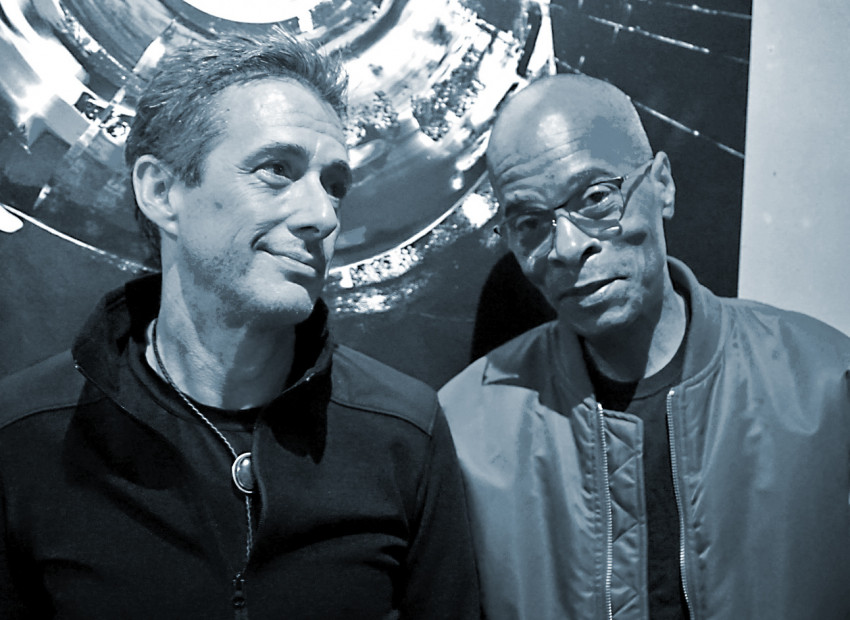 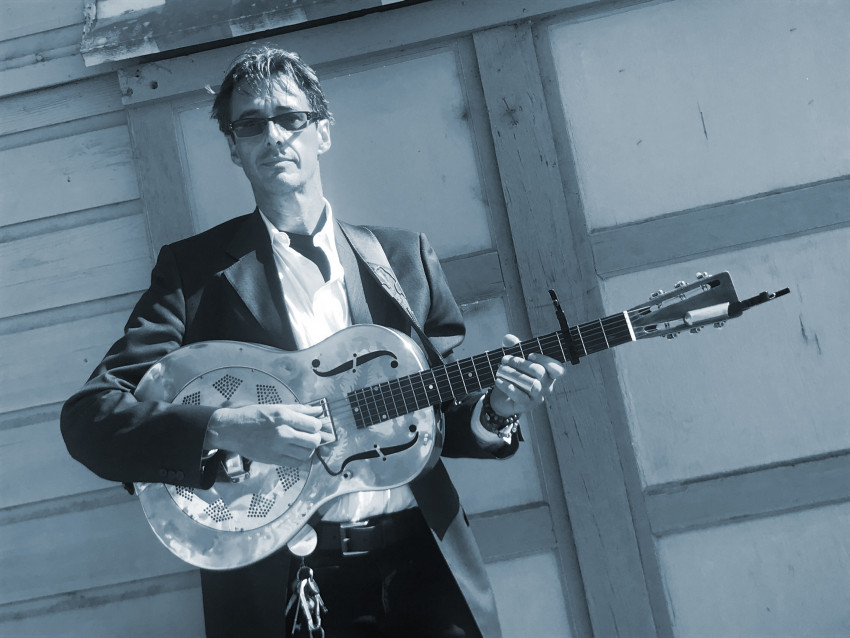 The San-Fran-Psyche-Delta™️ Blues Band! We are the world’s finest Blues and Soul band, mixing the Delta Blues sound from a National Steel slide guitar with a New Orleans Marching drum beat and popular songs from artists like Stevie Wonder or the Rolling Stones. We are all seasoned pros who love playing special events and making people move and smile! We know all the players in SF and we hire only the best. We’ve been hard at it for twenty-five years each and it just keeps getting better and more fun. So book San Francisco’s finest. You will be overjoyed that you did!
**we are all fully vaccinated, wear masks, and practice distance whenever necessary.

Derek and Benny came to play at our going away party last weekend, and playing they did, several genres fitting for the event, for close to 100 people!! What a GIFT! We had a setup outside on a flatbed trailer, and they came prepared with EVERYTHING they would need to make it all work out beautifully; all the lights, mikes and equipment, a great vibe, professional communication, and the ability to sound like a BAND playing chill music that enhanced all the beautiful connections being made at the party! As the hostess, I didn't get the chance to sit down and actually enjoy his slide guitar, which I LOVED, until right at the end, but when I did, I was really moved by how fitting it was for the occasion!! It felt like DROP_D played the background music to an epic movie..you know, the kind you never forget! I would hire them again in a heartbeat, not just for the great vibe and music, but also because Derek is such a cool human, and it shines through in his work!!

Debbie — that was an epic farewell party. You’ve cultivated a great group of friends over the years. I could feel how much you and Barlow will be missed. Thanks for having us!

Derek and Benny were on time and played a lot of our favorite blues.

Derek was our musician for my husband’s memorial service, which was a good-size hybrid online and in-person service. He was the right choice and contributed significantly to the success of the service. He asked many details beforehand and came well prepared to sing and play the songs that we requested and more. His performance was amazingly moving, cool, and professional. He was companionate, gentle, and easy to talk to. Many of our friends and guests commented how much they liked Derek and his music. Derek truly is a great singing guitarist!

Loved the group, the music, singing was amazing! They made the event! Encore!

Thanks Lori! We had a great time. We love playing to youngsters and their parents. Good luck to your grads!

What a great night!

Dereck and Bennie were phenomenal! All our guests are trying to book them. What talented and cordial musicians!

Thank you so much Michael. Bennie and I had such a great time last night. You’ve got a great group of friends and we were thrilled to play for you and your lovely wife on your 50th! I look forward to being in touch with Mark or John and playing for you all again!

Drop D was the band at my best friends wedding. The groom is a New Orleans guy so we needed a blues band that hits a high bar. The bride wanted music that would have people up and dancing. Drop D was both - and the music blew me away.

People were up and dancing and the grooms uncle said it was the best slide guitar he’d heard outside the Mississippi Delta. They played Robert Johnson, John Lee Hooker, and others I didn’t know the artists name but loved. (Have the set list to give to people Drop D?)

It was the best music I’ve heard at a wedding hands down. It was funky, cool, great vibe and I can’t recommend them enough. That antique steel guitar also made for stunning photo additions to the brides pics.

Kate, thank you I'm blushing. What a crew you guys were. such a great group. You guys made it easy for us to shine. I have a special place in my heart for the New Orleans folks that came out.

Derek came to our campsite and played a fantastic set of blues and classics! Engaging personality, easy going, on time and great sense of humor. VERY talented guitarist with his own take on favorites. Would hire Derek again!

WE ARE VACCINATED. And we are willing to practice social distancing and wear face masks.
We are a prompt, sharp dressed, polite group of individuals who are thrilled to be here. We are quietly setting up while everyone is running around getting things ready. Derek, the band leader is your point man. There are always logistics that need to be communicated and often we must all improvise. Derek will see to it that the band is up and running despite the rain or snow or giant alligators swimming around the stage. Dinner music is light. Might just be Derek or Derek with his sax. As the event progresses the band will gradually populate the stage and a transition from dinner to First Dance, or Mitzvah or sacred ceremony. By the end of the event we will have the dance floor creaking and shaking with great old songs that are exactly what everyone wanted to hear. When all is said and done, we've hopefully made some new friends in the service industry, we pack up and say our goodbyes.

Attending high school in the Haight Ashbury district of San Francisco, Derek Fairchild studied the blues way more than algebra. Robert Johnson, John Lee Hooker, B.B King, and Albert King were his favorites. But Jimi Hendrix and Stevie Ray Vaughan had a transformational influence on his playing. As his playing evolved he gravitated towards a Psychedelic Blues sound that is unique to San Francisco and the Haight.

Derek got started in Rio de Janeiro as a founding member of Blues Etilicos, now considered to be Brazil’s premier blues band, then it was Manhattan touring, doing shows, sessions, musicals etc with some of the world’s finest musicians.

He eventually made his way home to San Francisco. He has made a name for himself playing Steel Guitar with slide and plays for some of San Francisco’s finest performers as well as working with his own band, Derek Fairchild’s Bevy.

Derek is renowned in San Francisco as one of it’s finest and most versatile soul and blues guitarists. “He doesn’t play guitar, he sings it.”  He is able to play with great digital dexterity on his Telecaster with bright, crisp tonalities that would make Keith Richards proud. The very next song he might slip on his ancient National Steel guitar and instantly transport the crowd to the Mississippi Delta. He’s a natural lead singer and effortlessly harmonizes background vocals. His knowledge of music theory and site reading along with his already vast repertoire of popular songs make him an asset in just about any ensemble.

We have gear to play on a mountaintop in a blizzard with no electricity [we are very expensive in this situation]. And we have everything we need for indoor events except an electrical outlet. Self sufficient to the core.

Nice to have a stage. It brings dynamics to a performance that are lost on the floor and creates a safer environment for everyone. A good three pronged grounded power supply is a must if we are not playing battery power or acoustic. Otherwise we've got it