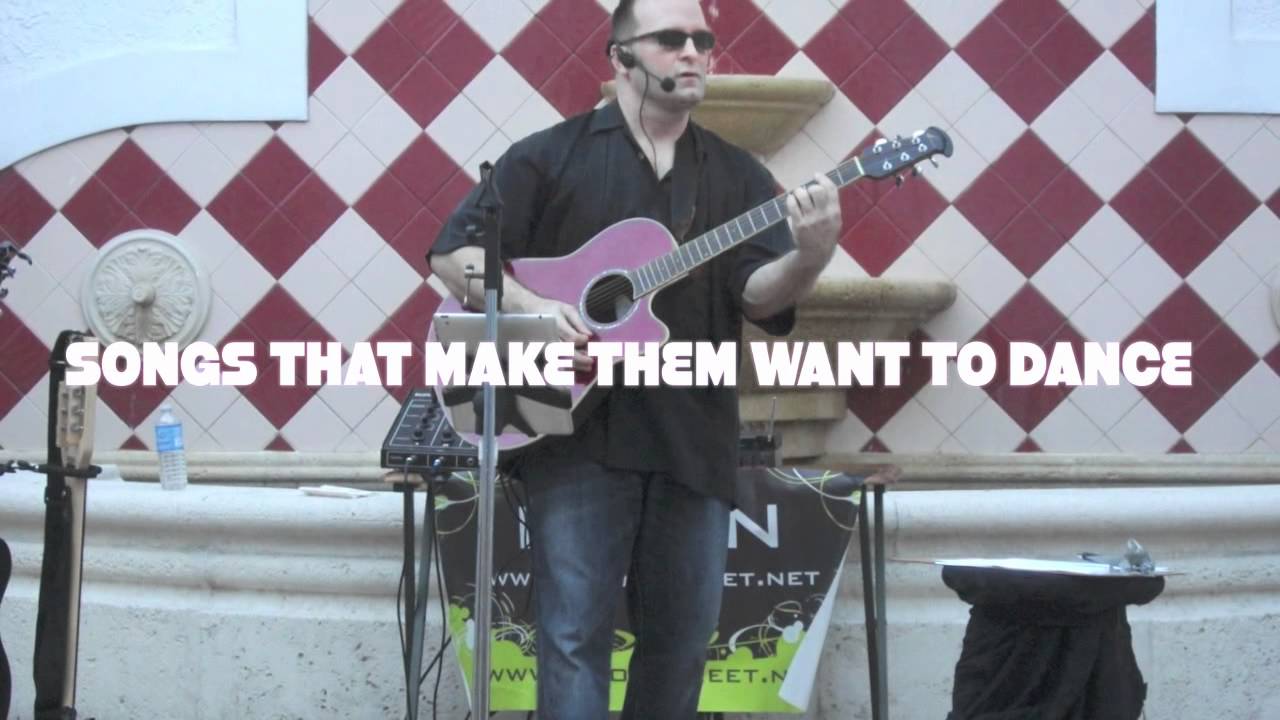 DiXoN Live at your Venue 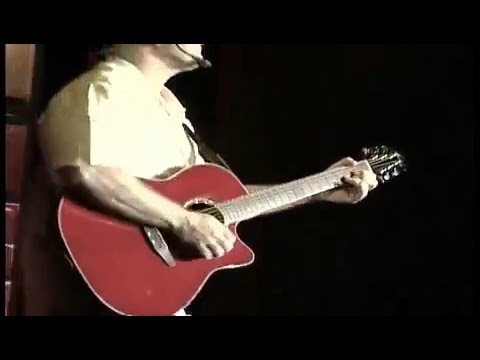 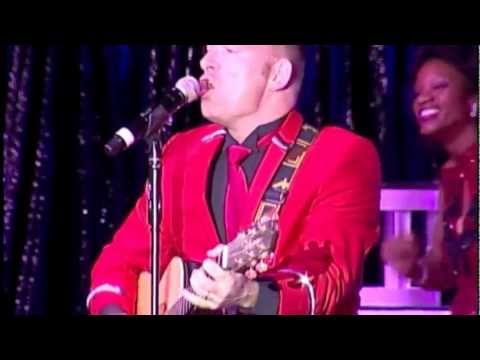 Rock N Roll Heart with the AF Tops in Blue 2010 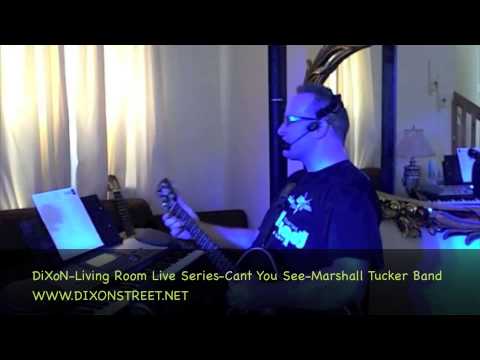 DiXoN - rendition of Can't You See 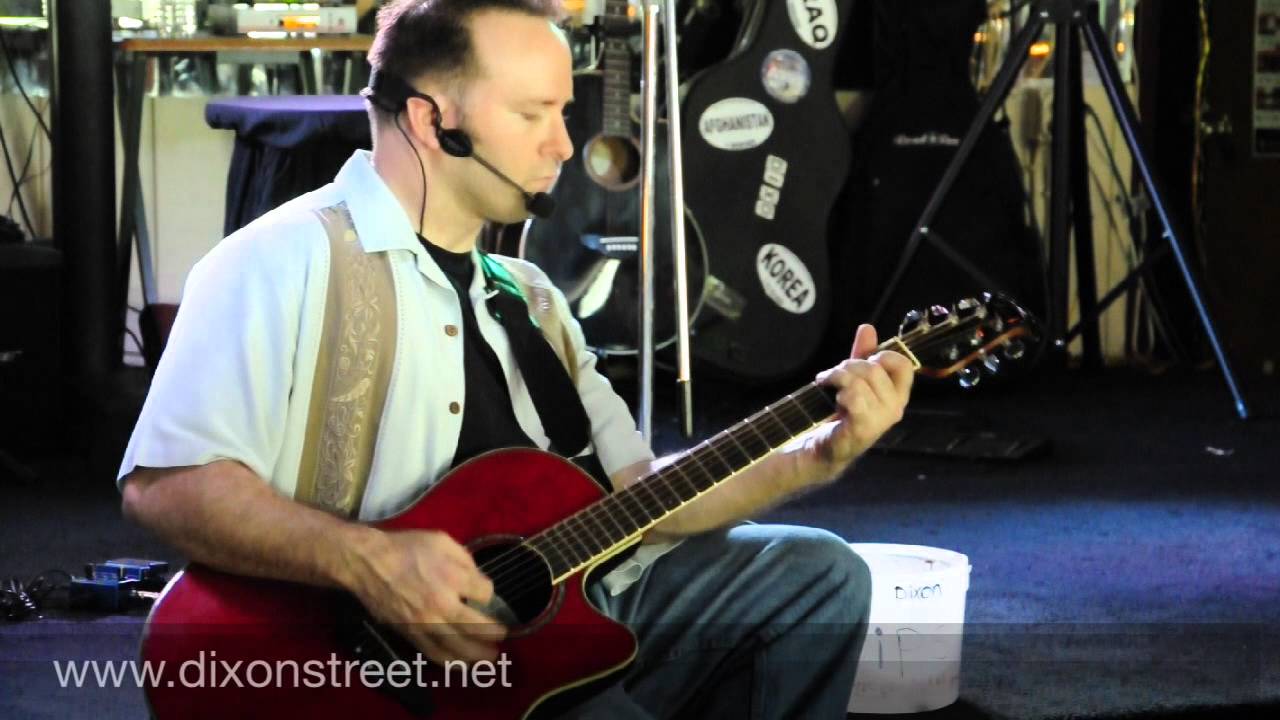 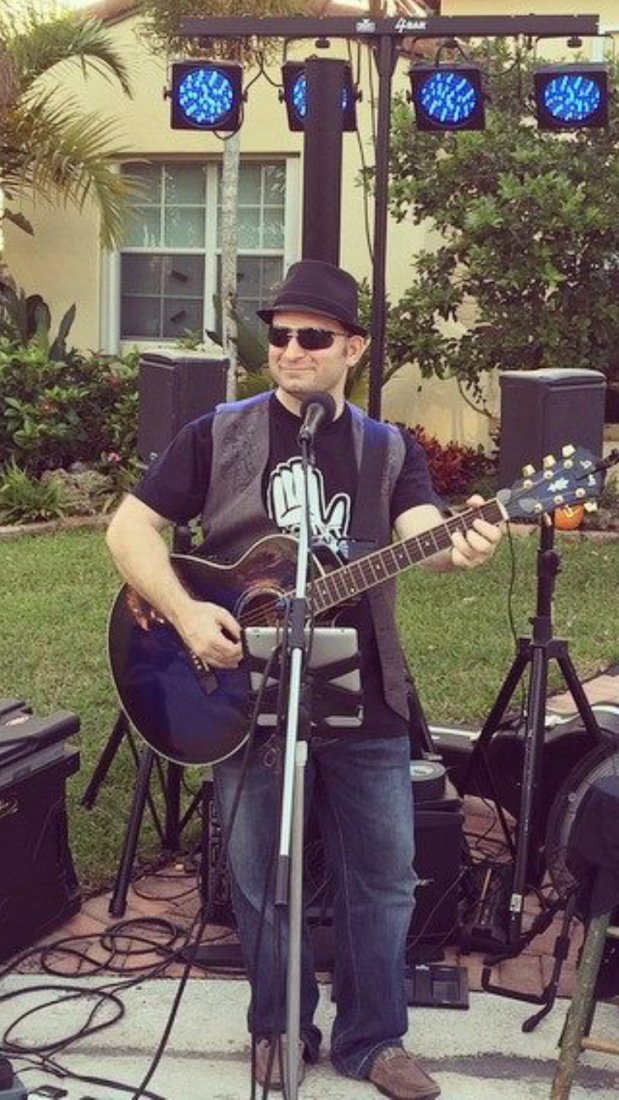 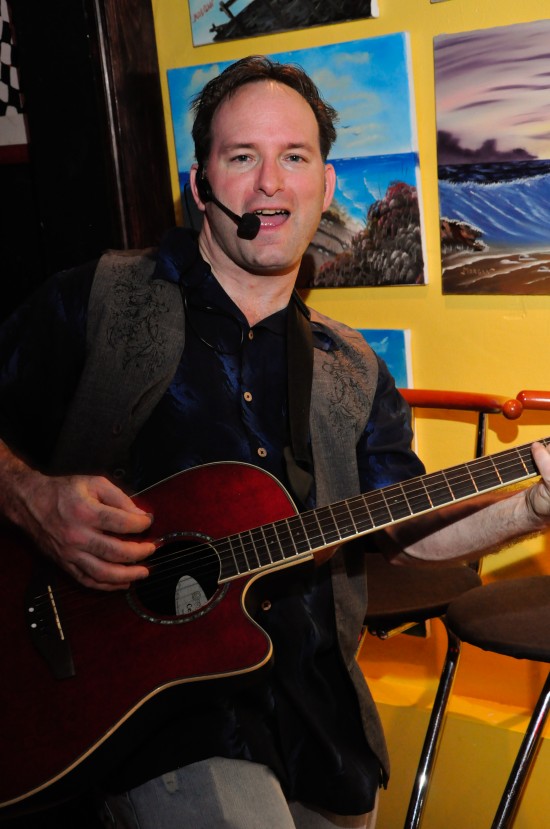 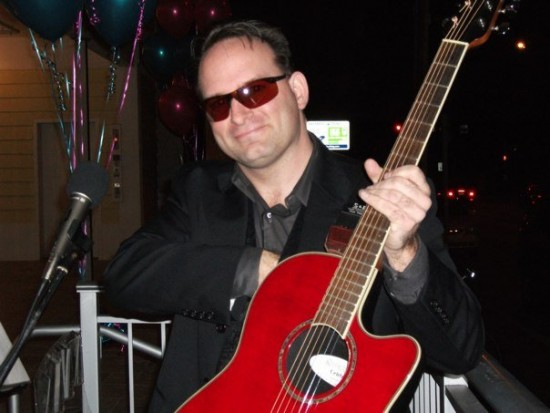 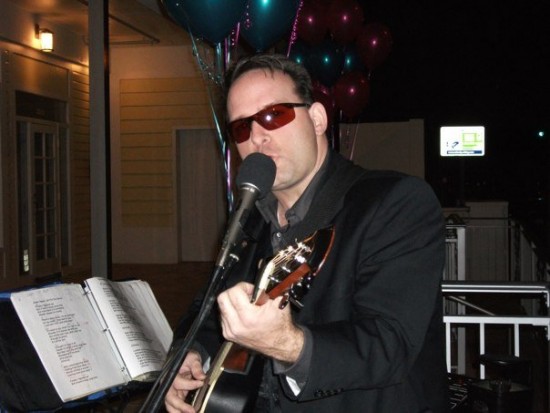 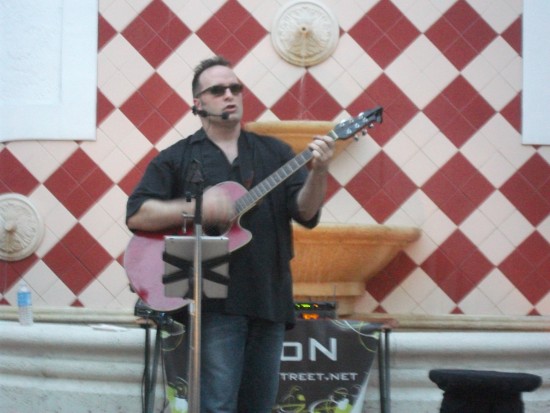 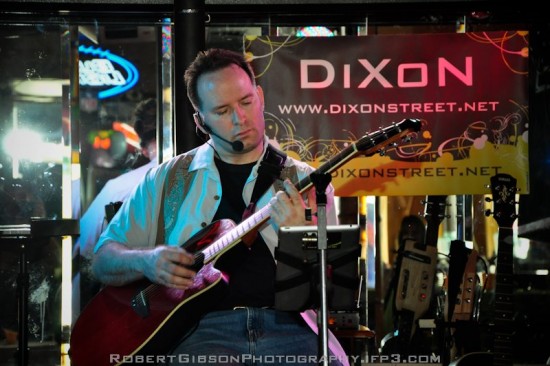 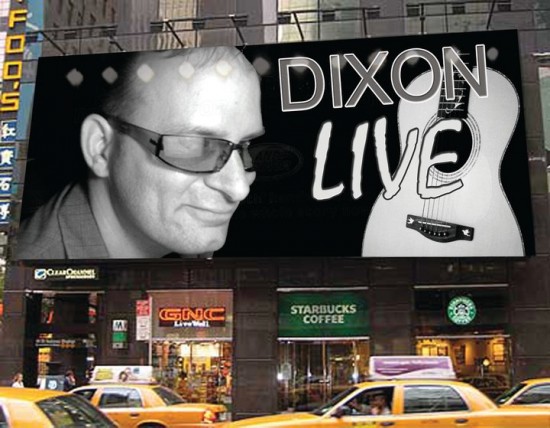 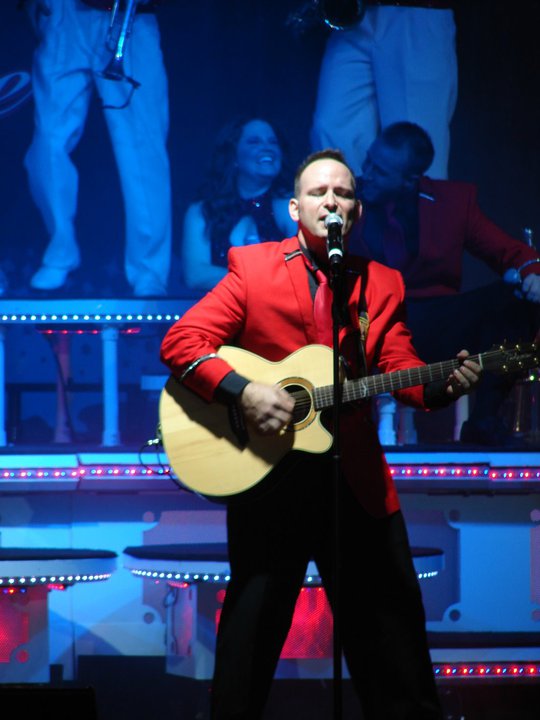 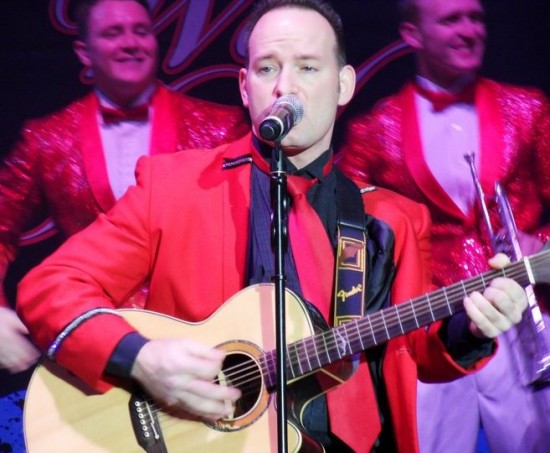 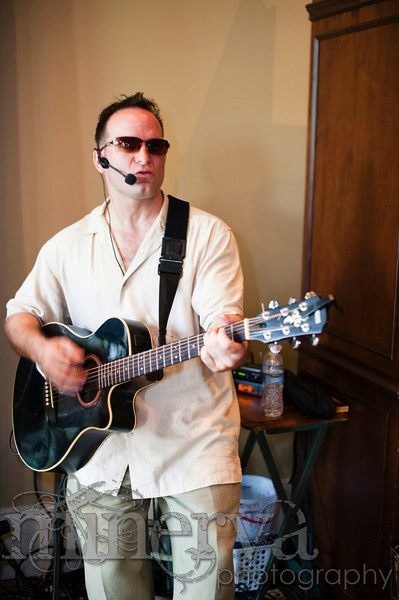 DiXoN is a Singing Guitarist One Man Band - An acoustic artists that provides rhythmic blends to your favorite cover tunes or award winning originals, whether as a background mood and atmosphere setter for your event or a featured performer entertaining your patrons. A one man performance by DiXoN combines the latest wireless and solo staging technology for audio and audience engagement, along with a touch of lighting enhancement to provide some glitter to your event. A DiXoN show can be tailored for your needs or satisfaction.

An awesome memorable event and a great time had by all!
Dixon rocked it out at Jeff's 60th Birthday party!
We will definitely book him again!
Thank You so much for making it special!

He was so great! Showed up early was professional and played awesome music. I would recommend him to anyone, he really made our night.

DiXoN can stroll the audience performing with wireless mic headset and guitar, or perform from a stationary location. The music can be tailored for your event. Either have a background music setting or have DiXoN as a featured performer providing themed sets of music.

Recently (Mar 2010- Apr 2011), completing a year long 140 show, 17 country, tour as a vocalists for the US Air Force’s premiere entertainment team, Tops in Blue, Robert brings his Hoosier musician experience to a inaugural launch pad of promising entertainment value in S. Florida as he releases his new original song list in the In No Time Soon soundtrack. The ten songs strike to the heart of enduring relationships and patriotism. The title song, “In No Time Soon” additionally placed as an honorable mention in a 2006 Song of the Year Contest. The song speaks about a long distance relationship during one of Robert’s own military deployments away from his wife.

Robert brings experience to the production of this new release from his freshman debut album “ Give Them Christ Love”, a compilation of eight original songs released on the Contemporary Christian Creative Workshop label in 1991.

He joined the Air Force in 1992 and continued promoting his compilation as he started his career as a Weather Observer while still performing in Montgomery, Alabama, and then making an international representation of his efforts in Korea.

He separated from the Air Force in 1996 and actually stayed in Korea as a civilian student that performed on a Korean TV show singing a Korean Pop song in their own language, liken to American Idol, and was featured at Seoul’s Amusement Park, Lotte World, as foreign up and coming artist. while winning various club/local Korean venue contests actually singing original songs off his, then future, In No Time Soon song list. He returned to the US in 1998.

As Robert continued his career in the Air Force Reserve at Homestead ARB, FL and a career at Bellsouth/ATT from 1999-2005 it took an epiphany in 2006 during a deployment to Qatar for the Air Force as a forward deployed command historian for US and Coalition Forces, that he found his way back to performing and expedited his way into the local gig circles in S. Florida and took the time to craft his In No Time Soon album, completed in 2008.

Robert adopted the stage name DiXoN and has been performing throughout Florida and across the country in special appearances, as a reputable entertainer for parties, corporate events, weddings, and various military events. He has been featured in many military ceremonies with his unmistakable acoustic/folk rendition of the National Anthem. His selection as a featured vocalist for the 2010 Air Force’s Tops in Blue followed several years of notable performances including a summer tour in 2008 along the east coast appearing in such places to include Savannah, Georgia, Albany & Utica, New York, Hartford, Conn., Norfolk & Virginia Beach, Virginia, promoting his In No Time Soon release. He continues his solo performance schedule into 2011 returning from the Tops in Blue tour invigorated and ready for new fans and exciting venues as he promotes In No Time Soon and continues to get accolades for his own acoustic versions of many of today’s and yesterday’s pop/rock tunes. He holds his own as a singer/songwriter creating songs from the heart, and enlightening listeners with his soft/sultry tone added to many popular cover songs.

DiXoN provides his own audio and lighting gear set-up.

Whether is was the energy of Michael Jackson, the songs of Elvis, Johnny Cash, and Hank Williams growing up, or the pop culture of the 80s and 90s that influenced a sound mix and stage presence that combines the sound and even looks of U2, John Cougar Mellencamp, Richard Marx, George Michael, Bruce Springsteen, along with a flare of current music star Adele into a rhythmic performance of new and old covers and award winning originals.

A corner or stage to set up in

see picture of stage set up in Photo tab

Mario Y. said “Franklin has a beautiful voice and is very respectful. Everyone was very pleased with his performance.” 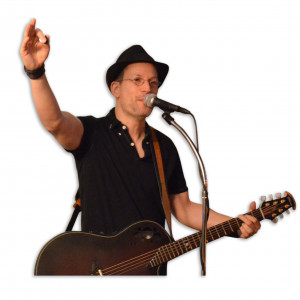 Elaine E. said “Joe was excellent at communicating before our wedding and so accommodating for all of our requests. He even learned a new song for our first dance, and…” 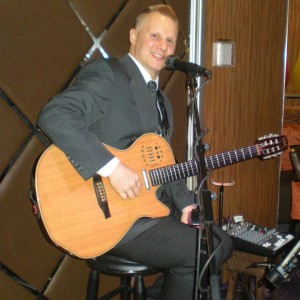 Roger G. said “Johnny was on time. We all enjoyed him and his expertise with the guitar and singing. He played all our requests. I would definitely use his services…”