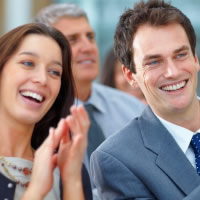 In addition to the United States, performances include over 20 countries.

No profanity, vulgarity or picking on the audience whatsoever.

Be the first to review Dan Nainan

As a senior engineer with Intel Corporation, Dan Nainan designed and presented highly technical demonstrations on stage with Intel Chairman Andy Grove at high-profile events all over the world. He took a comedy class to help get over the fear of public speaking at these events, at which the audiences numbered in the thousands, or sometimes in the millions on television.
The "final exam" for the comedy class was a performance at the Punchline Comedy Club in San Francisco, a performance which was a resounding success. His Intel coworkers, upon viewing the videotape, invited him to perform at a team dinner for 200 employees at the Consumer Electronics Show in Las Vegas. Upon seeing that performance, the organizers of Intel's annual sales conference asked Dan to perform for 2,500 salespeople from around the world. His dead-on impressions of Andy Grove and American presidents had the audience rolling in the aisles at 8 a.m. on a Monday morning. Many in the audience thought that he had been hired as a professional comedian, in what was only his third comedy performance ever.

Over the next two years, Dan was tapped to perform at various Intel functions. At the company's holiday party, he was introduced by Dr. Grove himself, whereupon he proceeded to mimic the Chairman’s distinctive accent and abrupt manner to the point where Mrs. Grove was crying from laughing so hard. Dan was promoted to Strategic Relations Manager for the East Coast, enabling him to move from Silicon Valley to New York City. Restless in his stationary new job and anxious to use his creative talents, he left Intel to pursue standup comedy full time.

In only his second year doing comedy, Dan won a comedy contest at the Washington, DC Improv and the chance to open for noted HBO comedian Robert Schimmel. He convinced Robert to let him perform in Robert's Hawaii shows. Dan flew to Honolulu at his own expense, and Robert was impressed enough with Dan's performance to invite the young comedian to tour with him as his feature act for a year. As a result, Dan performed at some of the country’s top comedy clubs, and Robert took him under his wing to teach him about the finer points of the business.

Dan was fortunate enough to be at the New York Improv when Canadian comic sensation Russell Peters was headlining. After Russell’s performance, there was extra time available, so Dan begged to perform. Because of that one performance, Russell subsequently asked Dan to tour with him as his opening act. Dan and Russell toured the world together, performing at theater shows for audiences averaging at least 2,000 per show. Dan both produced and performed in Russell's show at the Apollo Theater in New York City.

Dan continues to tour with Russell, and the exposure has allowed Dan to headline his own shows. A 100% clean comedian, Dan has performed at charity events, corporate functions, weddings, private parties, colleges, casinos, cruise ships and at the top comedy clubs in the country. He has performed for Hillary Clinton, CNN’s Dr. Sanjay Gupta, Howard Dean, Tony Blair's wife Cherie, and for many other celebrities. He as performed with noted comedians such as Jerry Seinfeld, Bob Saget, Brad Garrett, Tim Conway and Garry Shandling.

Dan has performed all over the United States, as well as in Aruba, Canada, England, Hong Kong, Japan, Malaysia, Mexico, the Netherlands, Scotland, Singapore, South Africa, Tanzania, Trinidad, Turkey, the United Arab Emirates, and of course on multiple tours of India. He attended the inauguration of President Obama as a guest of US Congressman Mike Honda, and he also performed at three inaugural events in Washington. At one of the events, the president's sister told him she thought his act was excellent. He also performed at the first TED conference in India, and he recently performed on the Muscular Dystrophy Association Labor Day Telethon live from Las Vegas along with Carrot Top and Penn and Teller.

Dan has been seen on NBC's "Last Comic Standing", on A&E, Nickelodeon and on various television commercials. Dan also does character voices on radio stations all over America, and is best known for his Bill Clinton impression. He performed at the Democratic National Convention in Denver as a guest of Congressman Honda. He had a small role in “The Last Airbender” alongside “Slumdog Millionaire” star Dev Patel and Daily Show correspondent Aasif Mandvi. The movie was directed by M. Night Shayamalan. Dan also starred in his first national commercial for Apple Computer, one in the "Get a Mac" series with Justin Long and John Hodgman.

The son of a South Asian nuclear physicist and an East Asian child psychologist, Dan is an accomplished musician who started piano lessons at the age of two. He sings and plays piano/keyboards, guitar, bass, drums and cello, and played the cello in “The Hoax”, a 2007 movie with Richard Gere. A former touring musician, he is also working on an album of original music.
A world traveler and adventurer, Dan enjoys learning languages and extreme sports such as bungee jumping, scuba diving, skiing rollerblading and skydiving. He was recently profiled in the New York Times, and a major literary agent in New York saw the article and signed him to a book deal about his transition from Intel to stand up comedy. An early riser, Dan avoids the bar scene, preferring to focus on languages, music and reading, as well as creative and athletic pursuits. He prefers public transportation, does not own a television and does not drink alcohol, smoke, or do drugs, and he never has.