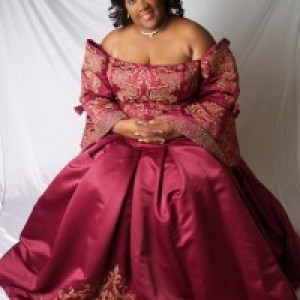 Miss English has performed more recently with the Pam American Symphony Orchestra and also performed the Aria "Love is Stronger than Death" from the Opera Temple of the Souls written By Anita Velez-Mitchell. The Conductor of the Pam American Symphony Orchestra Maestro Joseph Lliso quoted " Congratulations again, the Orchestra is enthralled with your voice- Cynthia, you have the passion, thrill and fearlessness- the 3 Essentials of Tebaldi, Callas and Caballe".

Be the first to review Cynthia English

Ms. English a native of Detroit, Michigan, now residing in Pennsylvania. Ms. English had formal music training under the direction of James Bisbing at Central Methodist Church in Detroit, Michigan. She continued to study Music theory and Choral Music at Wayne State University summer program for High School Students. Cynthia performed as a soloist with Collegium Musicum and mixed chorus. Ms. English was a concerto winner, performed with the Orchestra and travel abroad with Collegium Musicum to study under the direction of Andrew Parrot of Oxford University, London, England. Ms. English performed with the Detroit continued Education Opera Division under the direction of Joseph Mozzolini, also performed concerts for the Mary McLeod Bethune of Greater Detroit, and the National Council of Negro Women. She performed for the Mayor of Detroit, Michigan at the Manoogian Mansion, for the Achievement reception of the National Council of Negro Women and performed for the Detroit Women of Public Works and Evening of Opera at Marygrove College. She received a grant from the New Jersey Public Schools to perform operatic music and spirituals followed by discussion of both genres. Ms. English performed excerpts from Porgy and Bess with the Cedar Rapids Orchestra in Cedar Rapids, Iowa and in Concerts with the Delaware Valley Opera Company during their 2005-2006 season.

Ms. English studied at Juilliard under the direction of Maestro Vincent LeSelva and performed with the New York Grand Opera. The Cultural Heritage Committee and Justice for All presented Ms. English at the celebrations of Black History Month sponsored by Johnson & Johnson. She also was the music directress for the Newark Pre-Teens at the Newark Church of Christ. Ms. English performed with Pelham Bay Festival of Opera “A Verdi Marathon” March 2005 and in January 2006 also in May 2005 Cynthia was in concert at Iona College “Night at the Opera” in June 2005. During the 2006-2007 season, she has performed in various concerts with The Italian Opera Company. Ms. English also performed with The Pan American Symphony Orchestra under the direction of Maestro Joseph Lliso as the Guest Artist for the Hispanic Heritage Celebration, Miss English also was Guest Artist performing at the October 13, 2007 concert with The Pan American Symphony Orchestra, also at Saint Michael’s Church- A Tribute to Senator Martin Malave Dilan January 19, 2008. March 12, 2008, Cynthia performed at Merkin Hall with the Italian Opera Company. Also, Cynthia was a 2nd place winner in the Barry Alexander International Vocal Competition 2010.