The Casplash Band a.k.a. Caribbean Splash 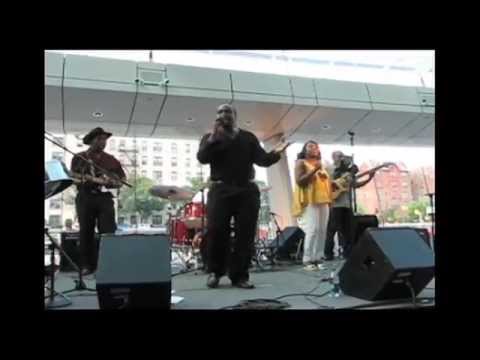 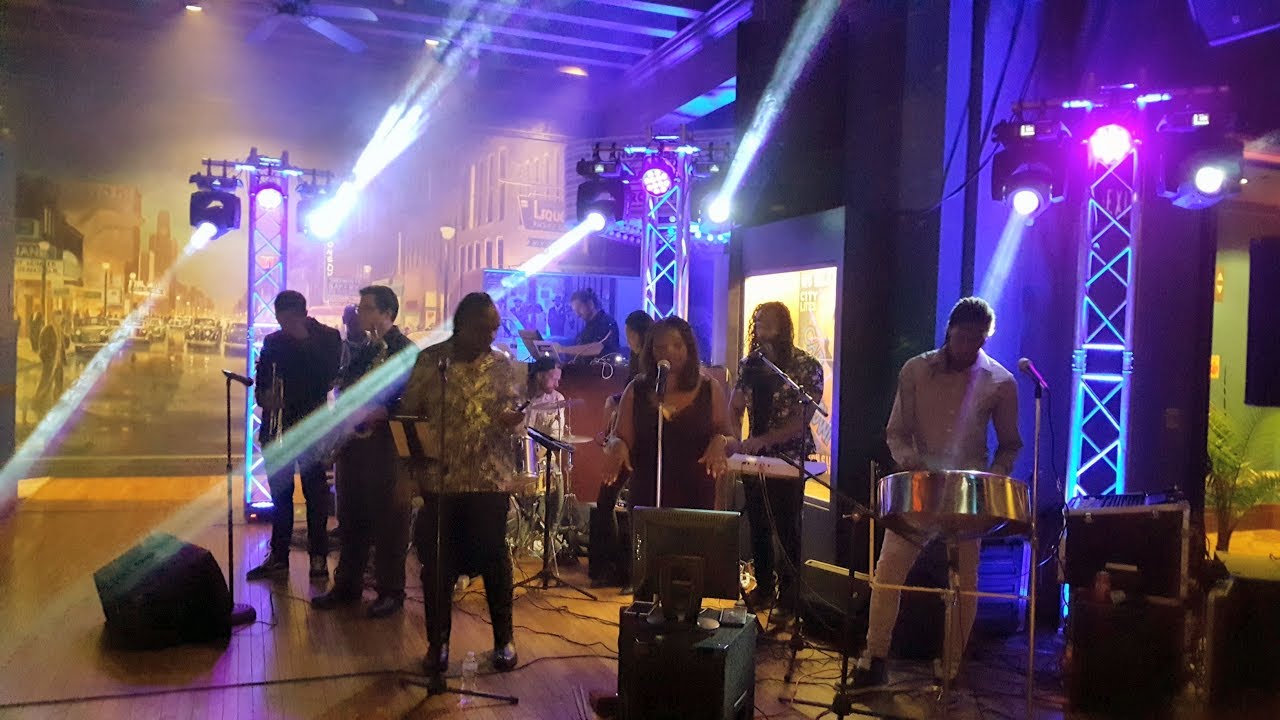 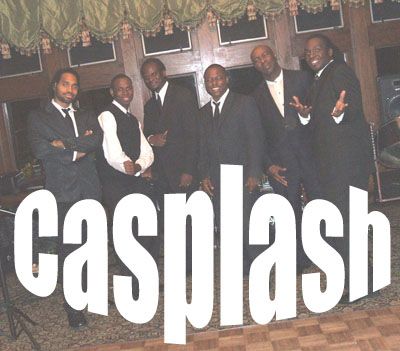 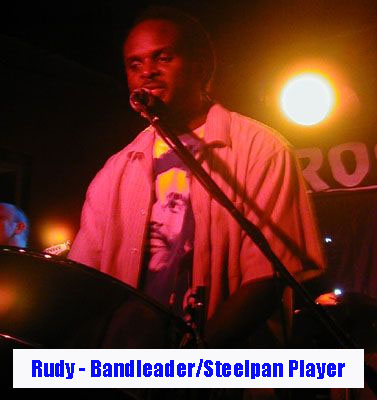 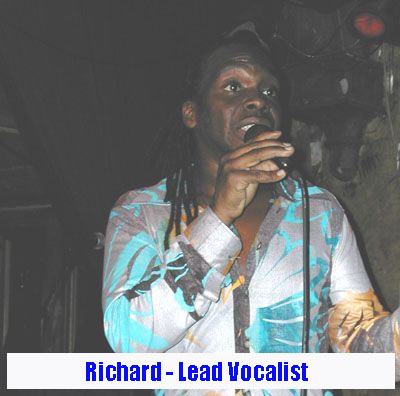 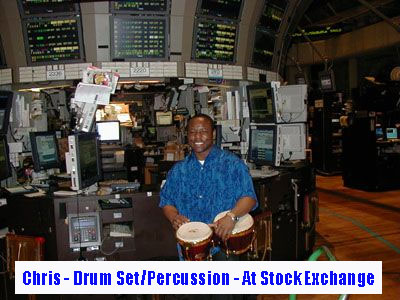 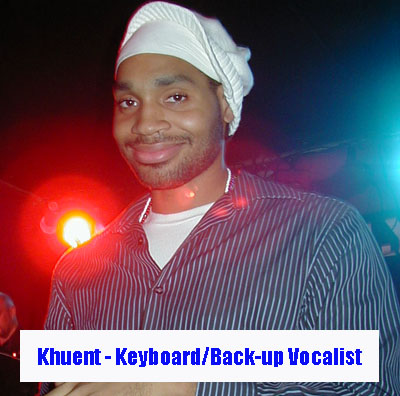 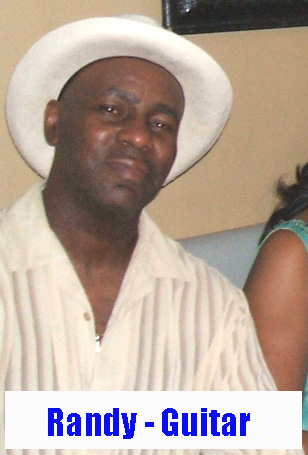 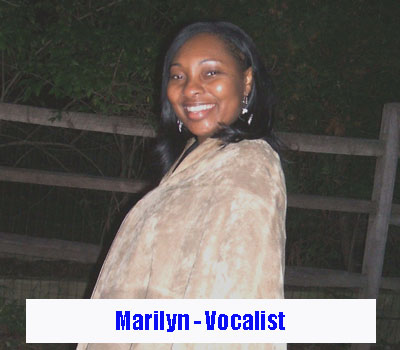 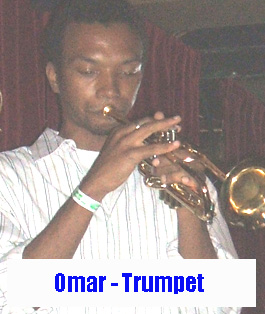 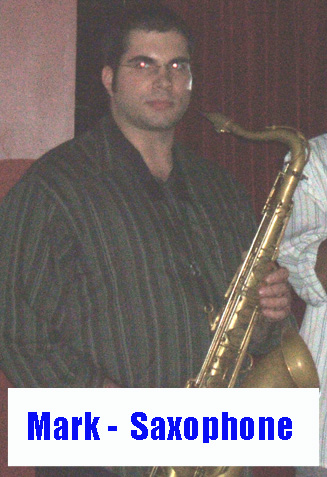 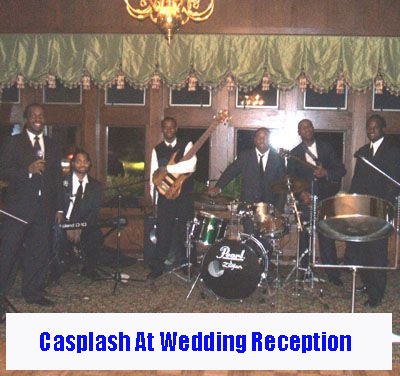 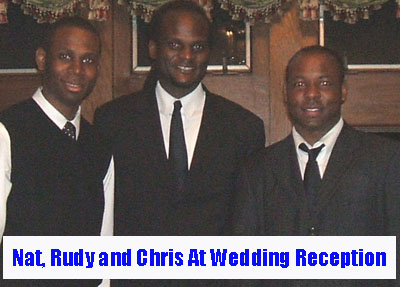 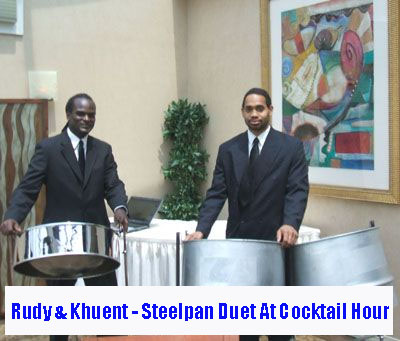 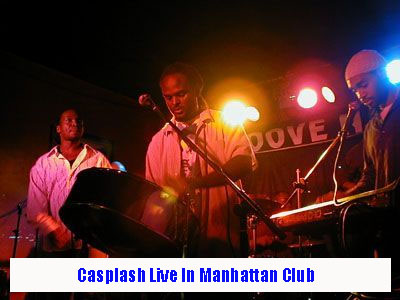 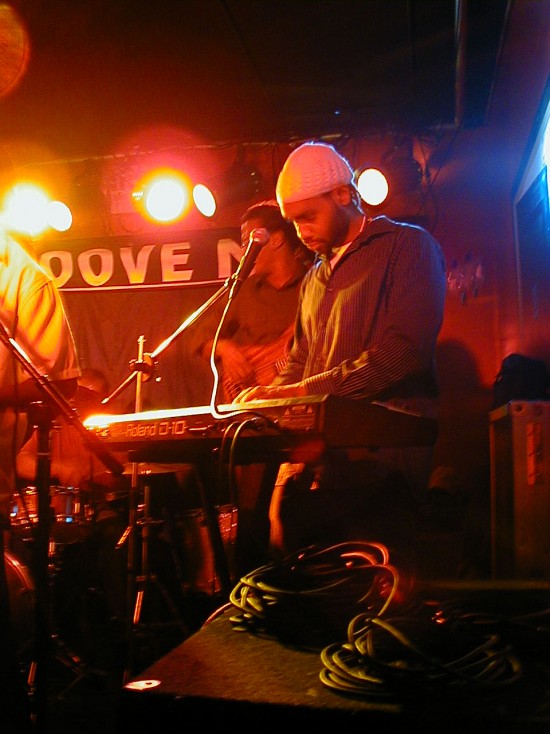 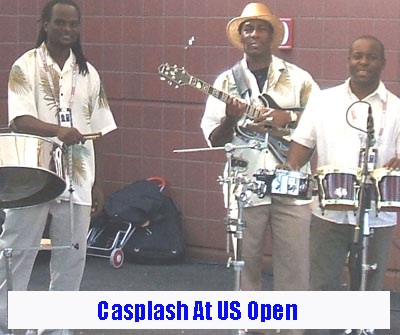 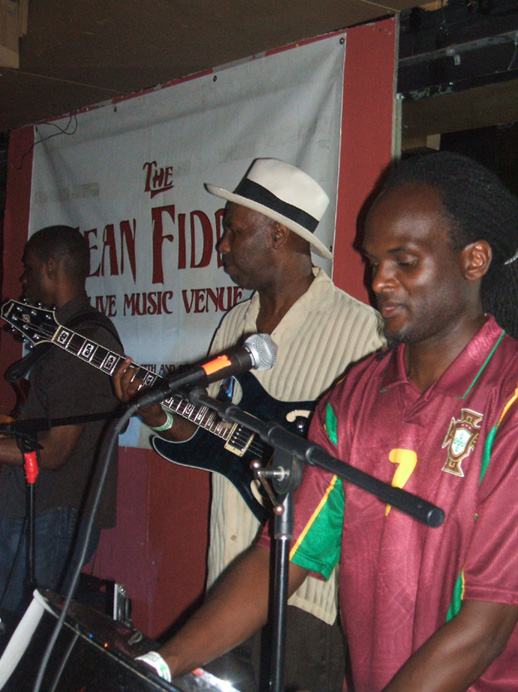 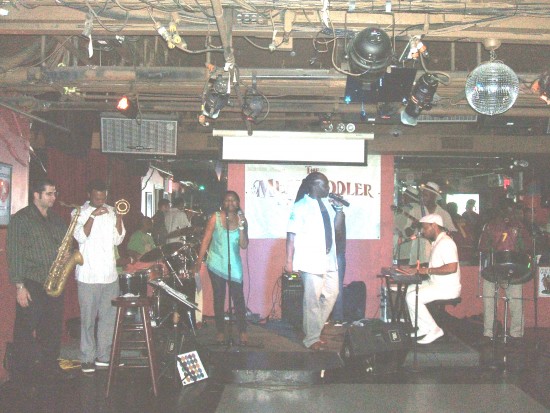 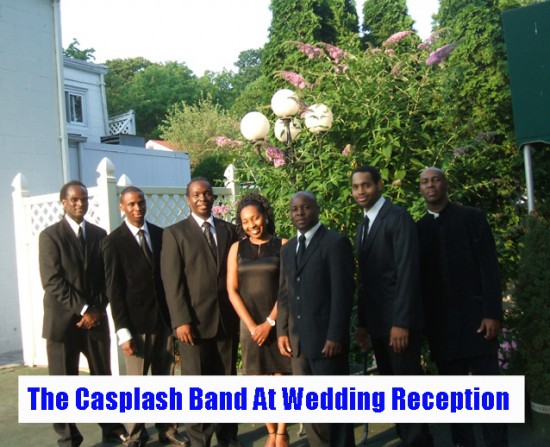 Since 2000 The Casplash Band has created fun and excitement by combining the beautiful sounds of the steelpan with soulful singing and hot tropical rhythms. In addition to sweet calypso/soca and reggae music, Casplash plays pop, rock, jazz and r&b as well. We are available in several configurations ranging from a single steelpan to a full 9 piece band consisting of male and female vocals, steelpan, guitar, keyboard, bass, trumpet, saxophone and drumset. We have spinning and laser dance floor lights available as well.

The primary function of Casplash is make audiences dance and the secondary function is to make them dance some more! Wherever There's Casplash, There's a Party!

This event with Casplash Band couldn't have gone better! They were amazing to have at camp, connected with kids at their age level, and got all of our campers and staff up and dancing the entire time they were at camp!

Rudy was excellent to work with! We hired him for a small outdoor bbq for my husbands birthday and he was the perfect addition for the luau theme. He was very prompt, self sufficient for set up, and played for 2 hours! I recommend working with him for anybody that wants to add something special to their next home event.

We are located on Long Island, and hired Rudy for our annual family BBQ on September 15th of 2018. He was very professional and courteous whether it be via text or over the phone. He even suggested a song list of any type of music that we wanted to hear. He arrived way in advance to make sure that he was set up to start the party on time. Rudy knows how to get the party pumping, he had everybody on their feet. Everybody in my family had a blast. I would recommend Rudy for any event you have coming up, and I look forward to hiring him in the future.

We had Rudy play steel drums for our daughters first birthday party at our home and he was fantastic and such a pleasure to work with! Hurricane Henri was forecasted to hit right during the time of our outdoor event so we had some concerns leading up to it and Rudy was very responsive and flexible with us. Luckily the rain ended up stopping right in time and it was perfect but Rudy was such a good sport during the uncertainty! The music really added to our party's one love theme and all of our friends are still talking about how great it was. Thank you Rudy!!

Rudy showed up on time, set up and played to the run crowd all evening. It was a great event and Rudy played a huge part in ts success and the runners loved the drums on the bell laps.

Wonderful addition to our event

Rudy was just great- He really added a lot of fun to our party! I would highly recommend him. He arrived on time and was very pleasent. He played a great selection of music. We can't wait to plan another event and use him again.

Rudy from Casplash was great!

Rudy played the steel pan beautifully.
We were really glad we had him come play for us.
Thanks Rudy!

A great entertainer, very friendly and flexible. Mr.Crichlow was early and quickly set up. This was for a staff appreciation luncheon. Our Teachers, Administrators and Staff really loved the extra touch of the steel pan music. A few have asked for us to have Mr. Crichlow back again next year. Thank you for making our event extra special.

Everyone had a great time... he didn't do as he said he would, other than that, all was good

FROM THE STANLEY ISAACS SENIOR CENTER: A big thank you to Rudy & Khuent for their great performance at our Multicultural Festival! The music was great, and you definitely got the party started! Thanks for your time and for your flexibility and creativity! Hope to see you again!

Casplash is a unique and eclectic band which has thrilled thousands of party revelers. We combine the beautiful sounds of the steelpan, soulful singing and hot tropical rhythms. Casplash is founded by Steelpanist Rudy Crichlow, a man whose roots are in Trinidad and Tobago. Throughout the years the members of Casplash have taken thousands of audience members on a fantastic musical escapade via live performances.

Casplash plays styles made for dancing ranging from Calypso, Soca, and Reggae to Pop, Funk, R&B and more. According to the type of performance you desire we can lead familiar dances such as the Electric Slide, Hokey Pokey, Conga Line, and Limbo. Additionally, we can teach a traditional West Indian follow-the-leader style dance called Brown Girl In the Ring. This dance is very popular among our audiences.

Casplash can range in size from a single steelpan, duet or trio, for intimate events such as cocktail hours, to concert style performances with professional staging and lights. DJ service can seemlessly be added to our performance package as well. Whether you need soft background music or hot music to make you dance the night away there is no doubt that Wherever There's Casplash, There's A Party!

Rudy and his bandmembers were a pleasure to work with. Friendly and personalble as well great communication. They were prompt and professional. Our backyard event was a great hit for children and adults. They personalized the event and made our caribbean themed party perfect! The ambiance with the songs ,instruments and dancing made all my guests feel as though they were transported to the islands! Thank you for everything! We would reccommend and use them again, without any hesitation! Nicole, Long Island

Rudy and Glen were a complete pleasure to have at our party. They were professional, cheerful and did a spectacular job to make my husband's birthday celebration a special one. I would highly recommend them to anyone looking for that special sound of the islands. Many guests were asking where I found them and requesting business cards. Thank you to Gigmasters for making it so easy to find such wonderfully talented people! K. Orbe

Casplash came to NYU and "got the party started". Great band, very professional... I highly recommend them!

Casplash is a get down daddy of a rockin good time! Their rhythm, personalities and talent will make any party remembered for a long time. Our guest enjoyed themselves immensely! They are professional, prompt and courteous. Would definitely hire them again for my next party! Julie C. Flanders, NJ

Collectively, we were extremely pleased with Caribbean Splash. The word to describe their perfomance would be "superb". They sounded great and the music was appropriate and timely. The band was courteous, accommodating and kept the dance area packed. They blended right in with our environment and became part of this huge family gathering. My husband and I were especially pleased with their exit. They performed three last songs which went over teir time and were not at all rushed about it. This made us feel that they were not just there to perform, but were aimed to please. We highly recommend this band to others and plan to use them in furture. Thanks again.

Casplash was fantastic - I could not recommend them enough! They played at our wedding in Connecticut this past October and we were thrilled with their performance. They were extremely professional from day one. Before we hired them, they arranged a performance in New York so that we could hear them live. They sent us a CD, DVD, and brochure. They learned new songs just for our wedding - a special touch that allowed us to incorporate our own style into the music. On our wedding day, despite torrential rain, they arrived early from New York to set up. They performed during our ceremony, throughout cocktail hour, and throughout the reception. They were extremely interactive with the crowd and knew just what to play to keep everyone dancing. Their performance was AMAZING! And when they were not performing, they acted as DJs and played some fantastic music between sets. And their rendition of our wedding song, Norah Jone's "Come Away With Me," was truly breathtaking. Casplash was by far one of the best aspects of our wedding day - all of the guests were raving about them the next day!

I would like to take this moment to express my appreciation to Casplash for coming out and performing for us. The students and staff all had a good time. They were extremely happy with the performance. This was the first experience that lots of them had with the steel pan .The celebration and party continued after they left. They definitely set the mood for lots of soca music,which thankfully, I had.

Rudy was so great-- From the beginning of talking to him on the phone, working with my brother (cellist) and on the day. He added an incredibly special touch to our wedding that all of our guests have been commmenting on. Very special. Very good. -the bride

The guys were great. They gave us exactly what we were looking for within our budget and many of the guests commented on how much fun it was to have them there. The event they played for us was a cake and coffee reception on church grounds (as opposed to a full-blown rock and roll party with dancing sort of thing) and they fit the atmosphere perfectly. They were on-time and ready to go when the bride and groom entered, which was especially great as I wasn't available to meet them before the ceremony and was just trusting that that they'd be there - and they were! I also appreciated their foresight in asking what we wanted them to wear and other such details as it really showed me that they were focused on meeting the desires of the bride and groom, whatever they might be. Rudy and his partner were personable, professional, and very talented. I'd recommend them in an instant

They were fantastic! They really made the cocktail hour enjoyable. I will be recommending them to anyone I know who's getting married. Thanks Rudy for a great job!! Diana & Vinny

hats off to rudy and quent from caribbean splash!!!! from the first communication until the good bye Rudy ws prompt and professional. Had a great time with gig masters and would highly recommend working with Rudy... maureen p.s. music was great