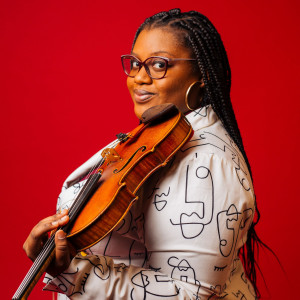 Caitlin arrived on time and was very professional though the event did not start on time. She performed 5 exquisite selection and set the mood for our event. Thanks Caitlin for an excellent performance!

Caitlin Edwards began studying the violin at the age of eight, through the Music Opportunity Program in Birmingham, Alabama. In 2018, she was awarded the Rising Star award from the Gateways Music Festival and helped lead the Nairobi Philharmonic in Tchaikovsky’s Nutcracker, the first live ballet/orchestra production in Kenyan history. She also recorded the movie score for Disney movie, “The Lion King”, in April 2019. She’s performed and recorded behind artists such as Ms. Lauryn Hill, John Legend, Common, Yolanda Adams,India Arie, and etc. Caitlin was featured as a soloist in the “Dreams of Hope” documentary which premiered on PBS stations across the US in February 2020. Caitlin is a graduate of DePaul University, receiving her Masters with distinction.