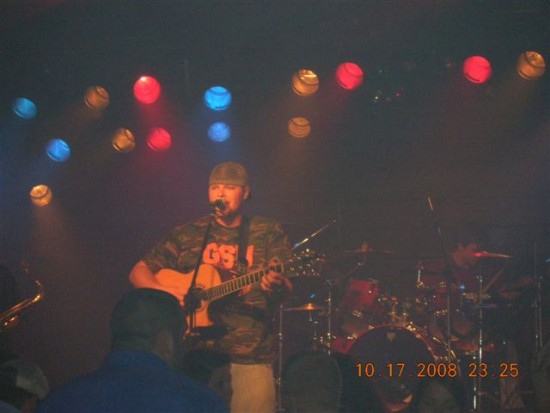 I'm here to entertain and make everyone have a good time! I play solo acoustic shows as well as shows with a full band. I play a very wide variety of cover songs ranging from classic country to 80's and 90's rock, modern country, and all of your favorite fun sing along songs! Special song requests can be made as long there is ample notice before your requested date. I have performed multiple weddings, parties, birthdays, etc., and would love the opportunity to entertain you. I hope to speak with you soon!

Excellent! The first time I saw Bryan play was with his full band and they blew me away. Not only is the music awesome, his stage presence is great. He really keeps the crowd excited and involved. It's like he's part of the crowd. I have seen him several times including playing by himself. Great vocals. I try to make his shows whenever possible and stay aware of when and where he plays. Anyone having a special event or party will not be disappointed in hiring this talent.

Bryan Clark is exciting, entertaining and keeps the crowd going the entire show. Bryan played for many on many occasions ( 2006 -2012)with his full band as well as acoustic. He keeps the crowd drinking and it is a high energy show. You can’t go wrong booking Bryan for your private event, wedding, Club/ Concert Hall.

I've seen these guys perform several times and it's always a good time. They play a nice variety of music that everyone gets into and even blend multiple songs into one. Check them out the next chance you get!

Bryan Clark is a very entertaining guy! Awesome voice, great band, always up for a good time! His voice is always on key and every song seems to make you want to dance...I definitely recommend him as a future artist/entertainer at all events! Good job Bryan!

May I first say that I am thrilled that you are not allowed to type in all caps on this site. Can we just make that a general internet rule?

Now on to the important stuff...

I've seen Bryan in about a dozen different venues with varying types of crowds. He sounds great whether he is doing an acoustic show, playing with the full band, or having special guests hop on stage.

Bryan covers everything from Sublime to Kilo to Zac Brown and does some really fun 'mash ups' where he brings a couple songs together and makes them ever better! He loves interacting with the audience, takes requests, and is constantly bringing new covers into the mix. If you're a Georgia Southern fan he also has a really fun original song about going to school in the Boro!

I live over 200 miles away from where Bryan generally plays these days and still make a point of seeing him at least 3 times a year. Definitely recommend him for your upcoming event or going to see one of his weekend bar gigs!

I started going to Bryan's shows in college and have continued to go to his shows ever since. You can expect a big crowd of people who are ready to dance and have a good time whenever Bryan plays.

Bryan played at my wedding in December of 2010 and he was absolutely amazing. Wonderful voice. Sadly, after I've heard him play some of my favorite songs, I no longer like the originals! Truly a great entertainer and it doesn't hurt that he's an awesome guy too. My husband and I try to see him whenever he or his band is playing and Bryan never disappoints. If you haven't seen/heard him yet, you are really missing out.

I have seen Bryan play on numerous occasions (both acoustically and with his full band) around Atlanta and he puts on a GREAT show!! He has a wonderful stage presence and keeps the crowd going the entire show! No matter what category of music you like, he'll play something in it! I would HIGHLY recommend him!!

An audience member at one of my shows should expect to hear great music, exceptional musicianship, and excellent entertainment. One of the things that I have learned over my years of performing is that I am there for the audiences pleasure. I love to interact with the crowd when the setting is appropriate, and make sure everyone is having a great time!

My name is Bryan Clark and I have been performing acoustically across the southeast since 2004. I started playing music in Statesboro, Georgia, and was named favorite local artist, best singer/song writer, and best local act in Statesboro from 2005 until I left in 2009. I have opened for several national artists including: Zac Brown Band, Rehab, Little Big Town, Luke Bryan, Eric Lee Beddingfield, Corey Smith, Colt Ford, Brantley Gilbert, and many others. I live in the north Atlanta area and have performed throughout the city and metro area. Recently, you may have seen me at Hemingway's Bar on the Marietta Square, Sidelines, Bailey's, Wild Wings, or other local hot spots.

I can provide my own sound system at no additional charge. The only thing I will need is an electrical outlet withing 15-20 feet of where I'm performing. Any dates that are 3 months out require a signed contract and 25% deposit.

Growing up in a household of people that all listened to different genres of music, I was very fortunate to become a fan of a lot of bands/artists. My music collection ranges from Hank Williams Sr. to Dave Matthews Band, and everything in between. I love the musicianship of Dave Matthews Band and the song writing of classical artists. A lot of my original songs have an outline of what a classic country song would be (story telling), but don't necessarily come across as a country song.