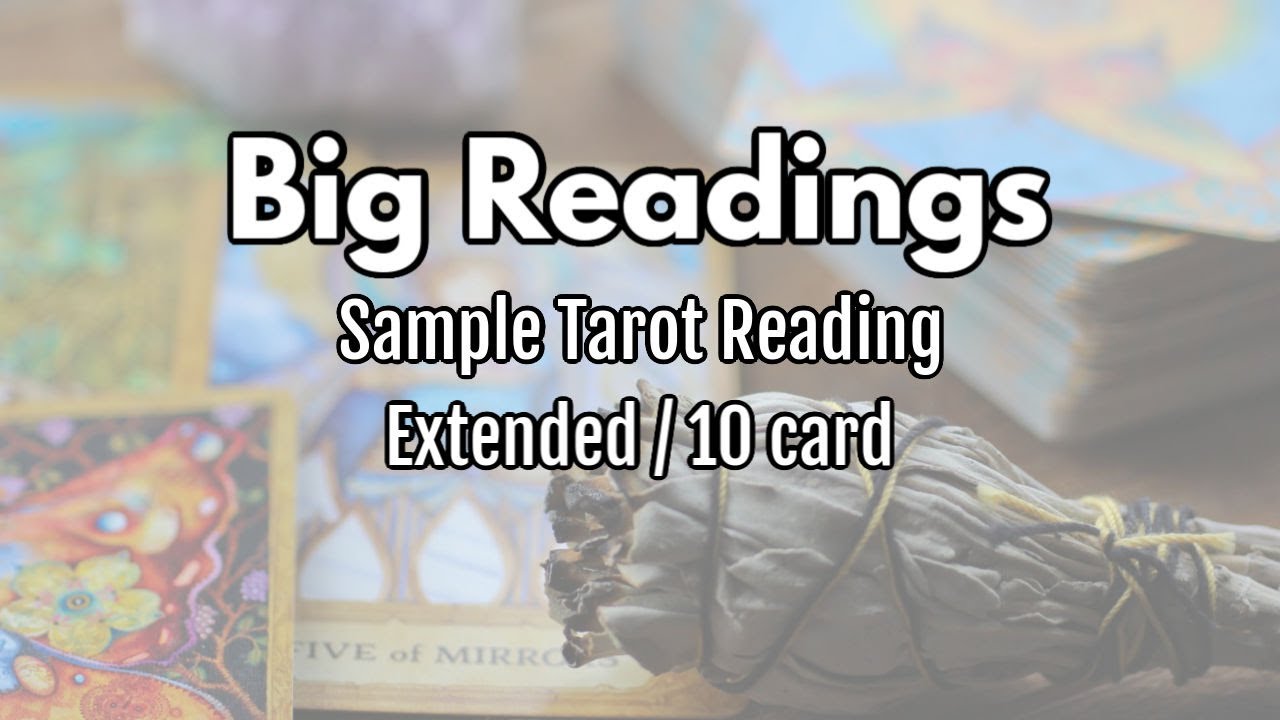 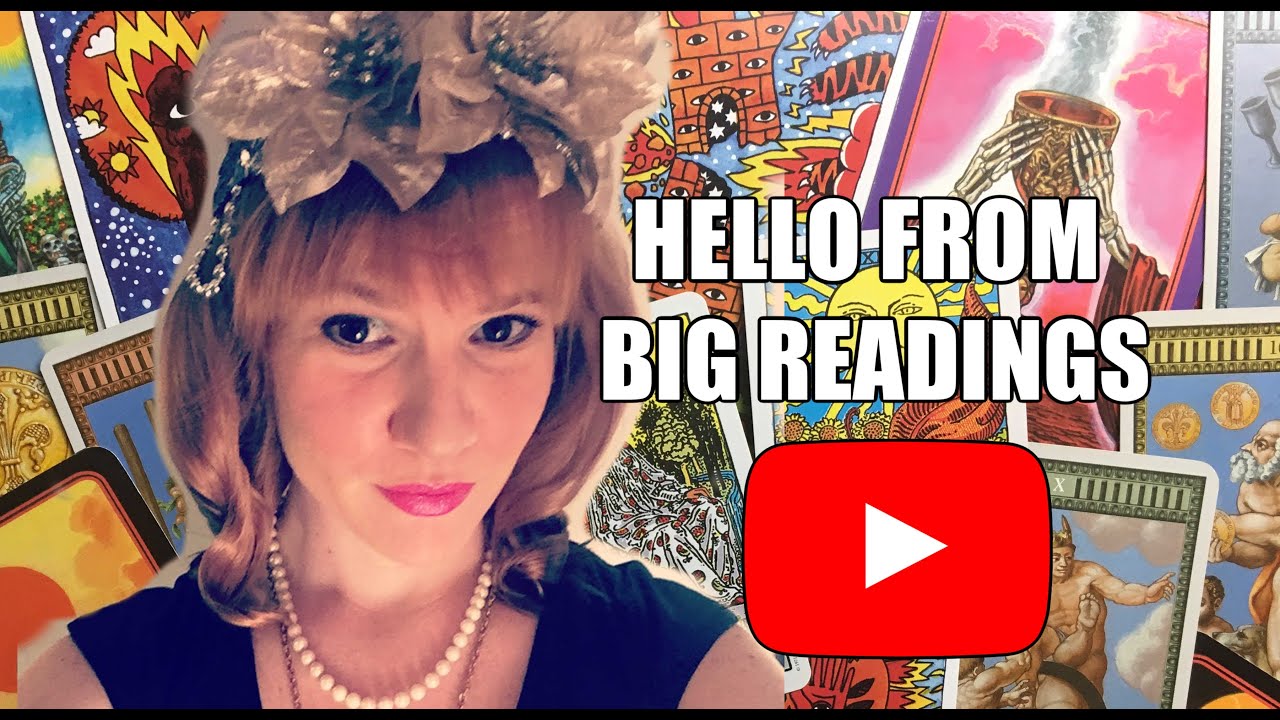 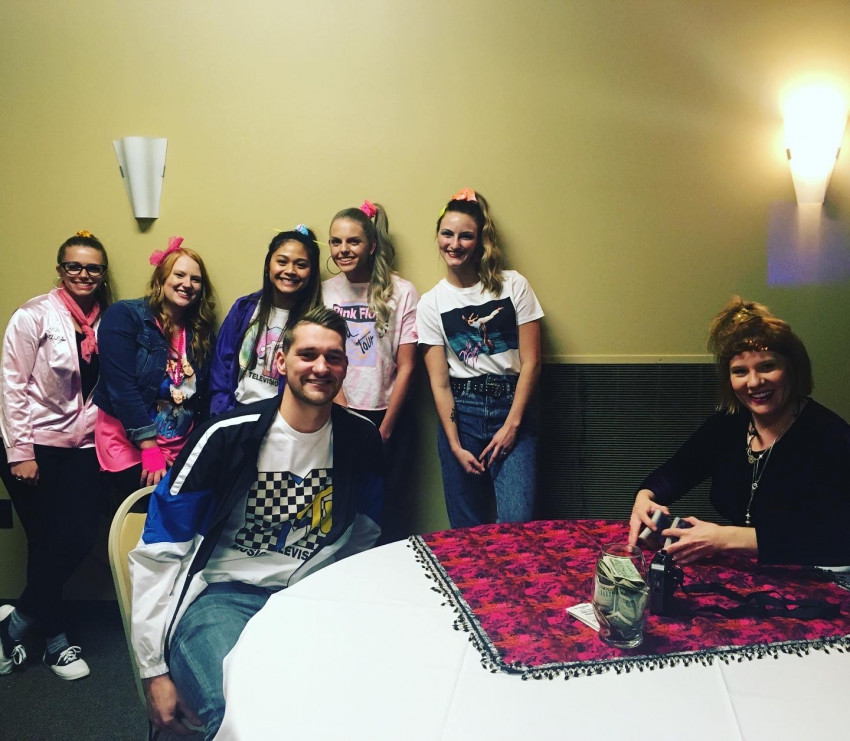 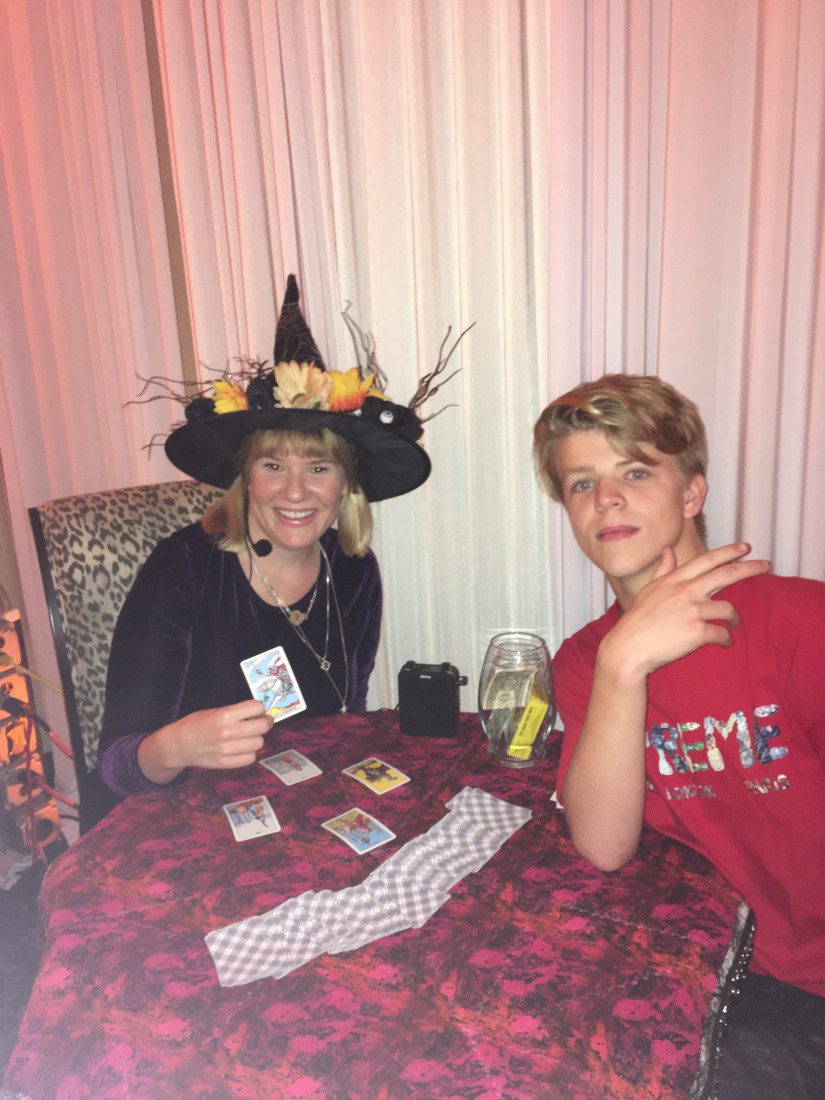 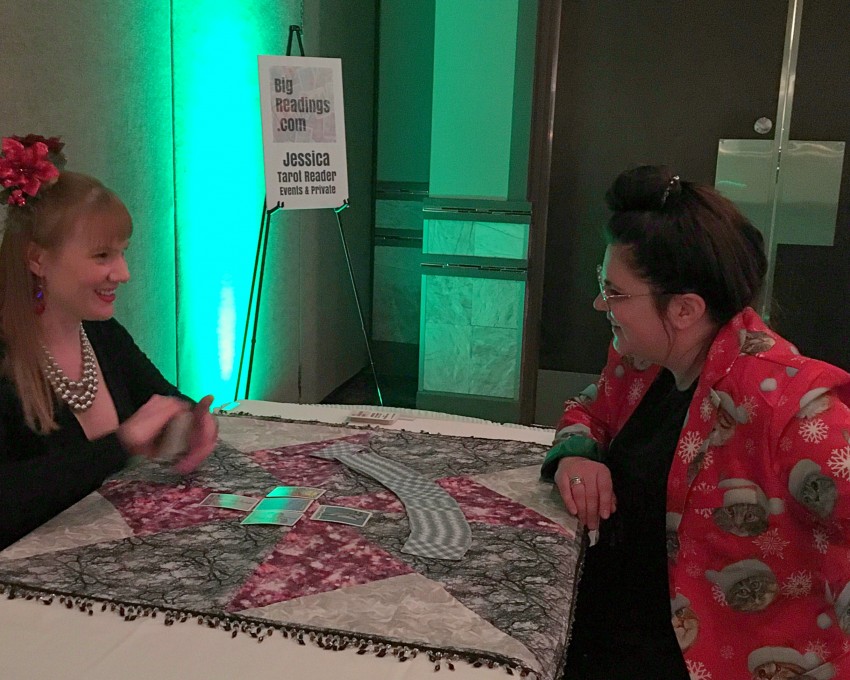 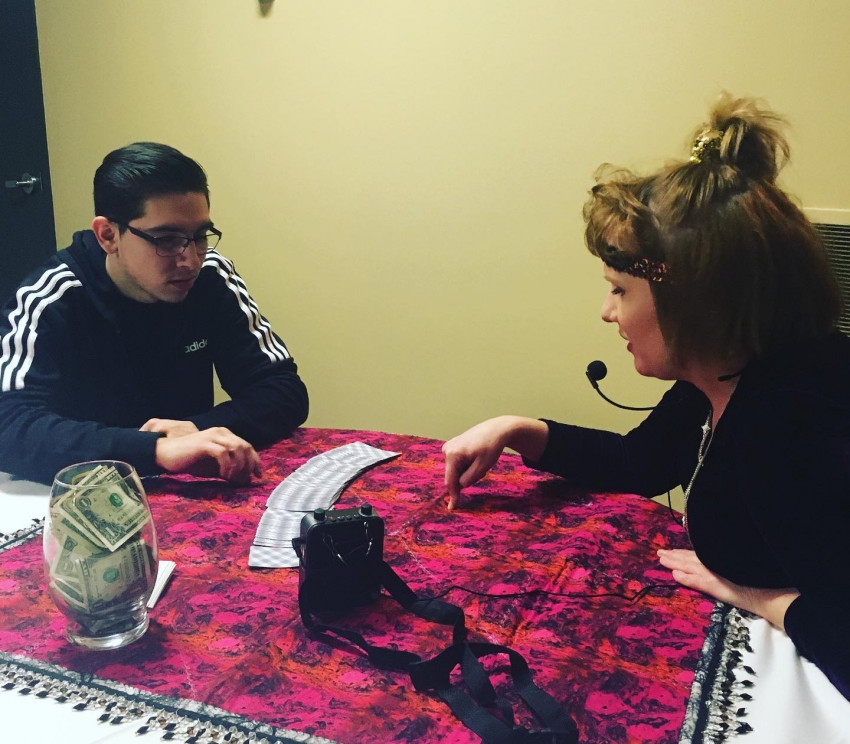 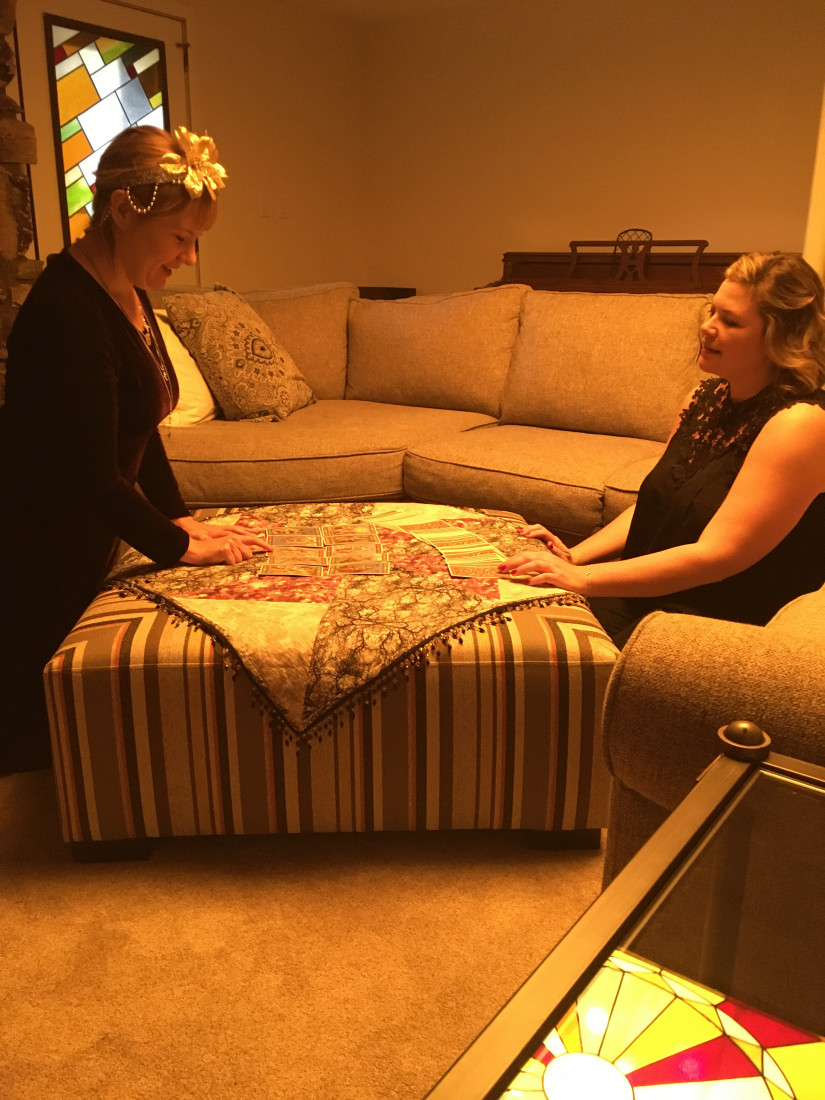 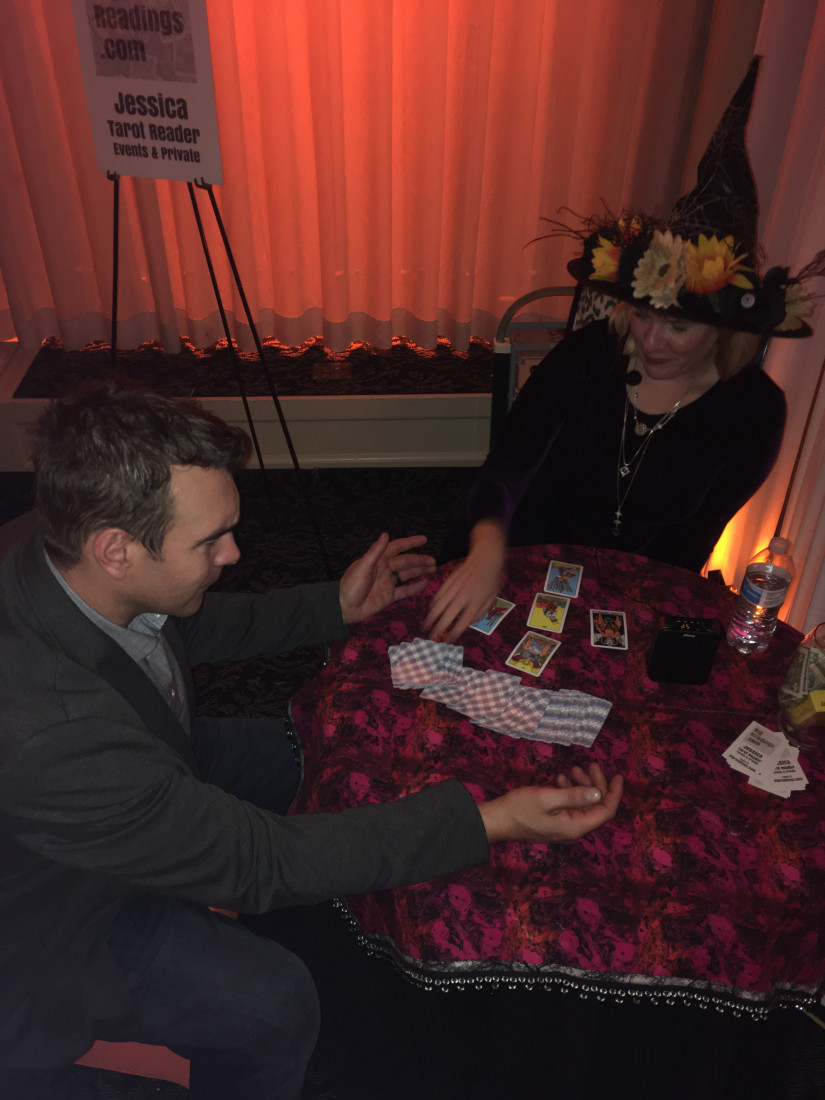 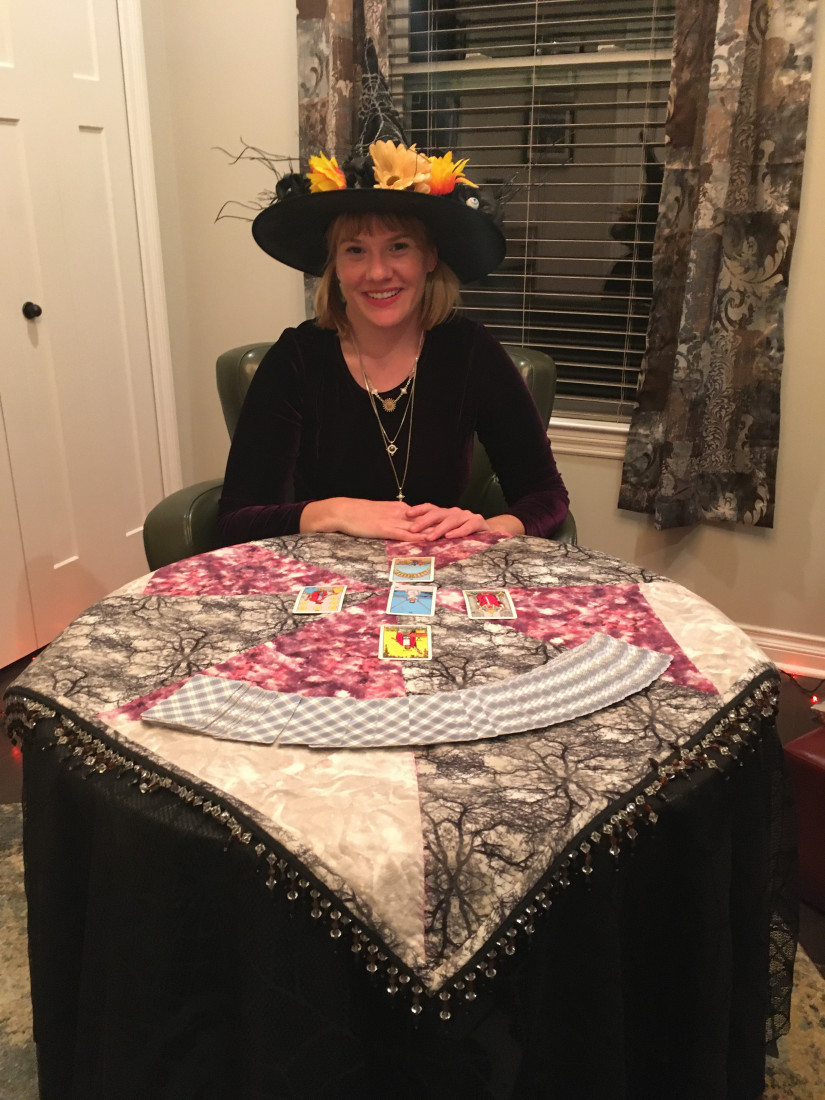 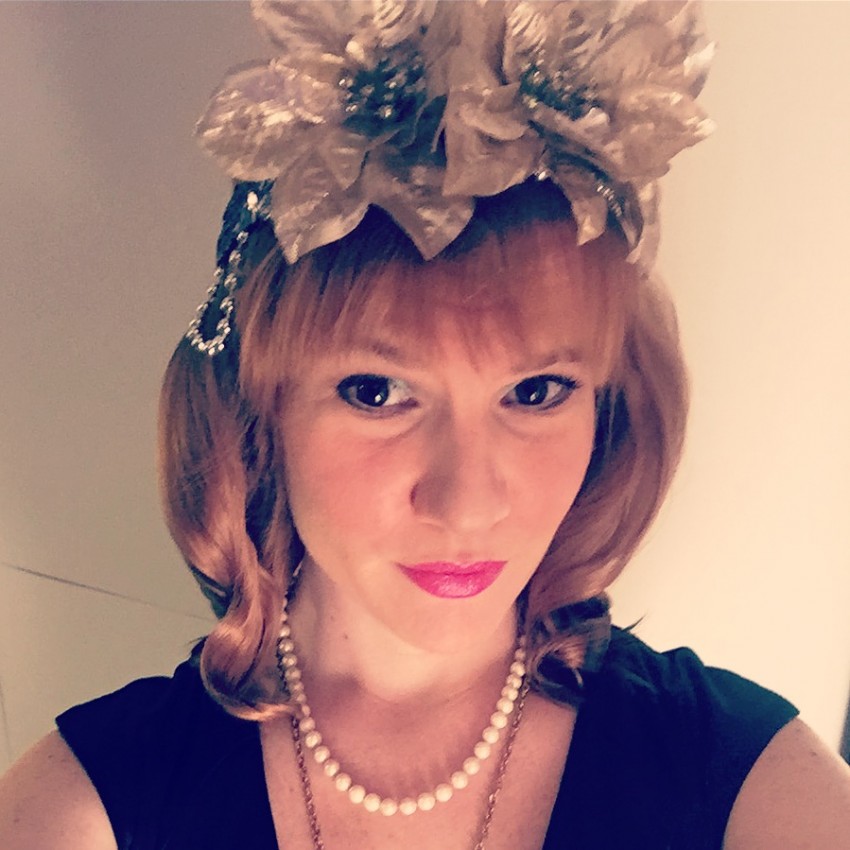 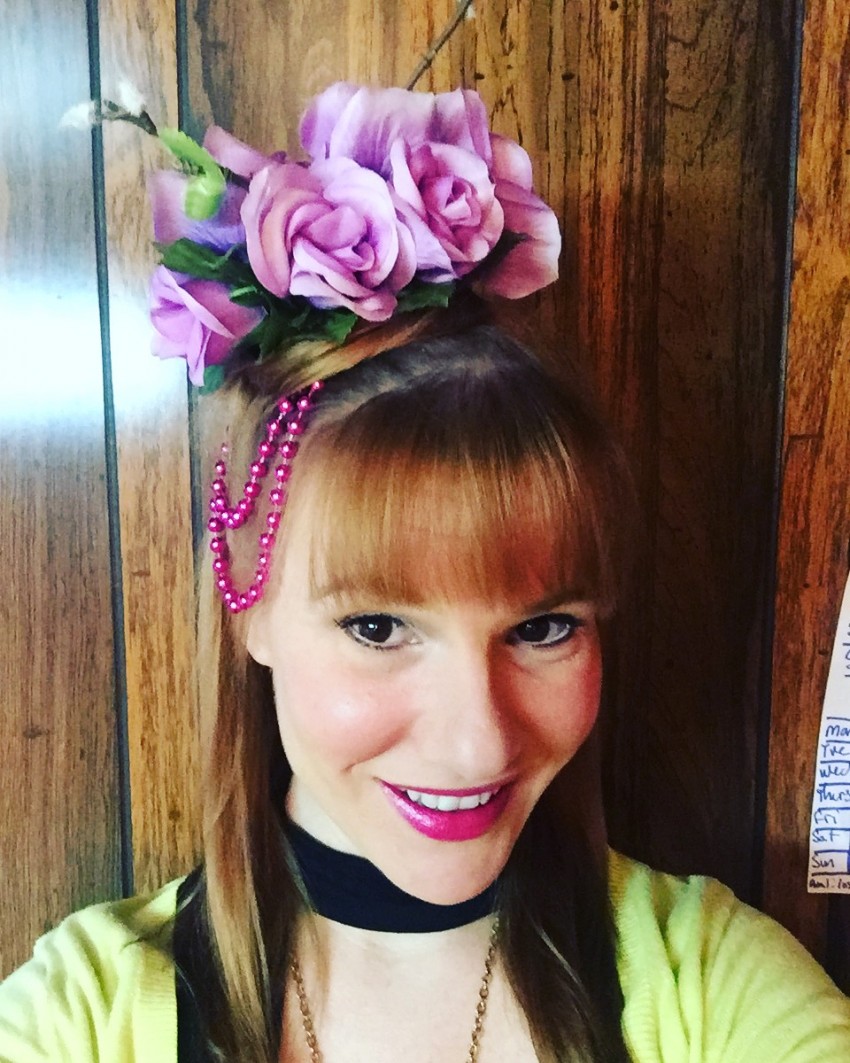 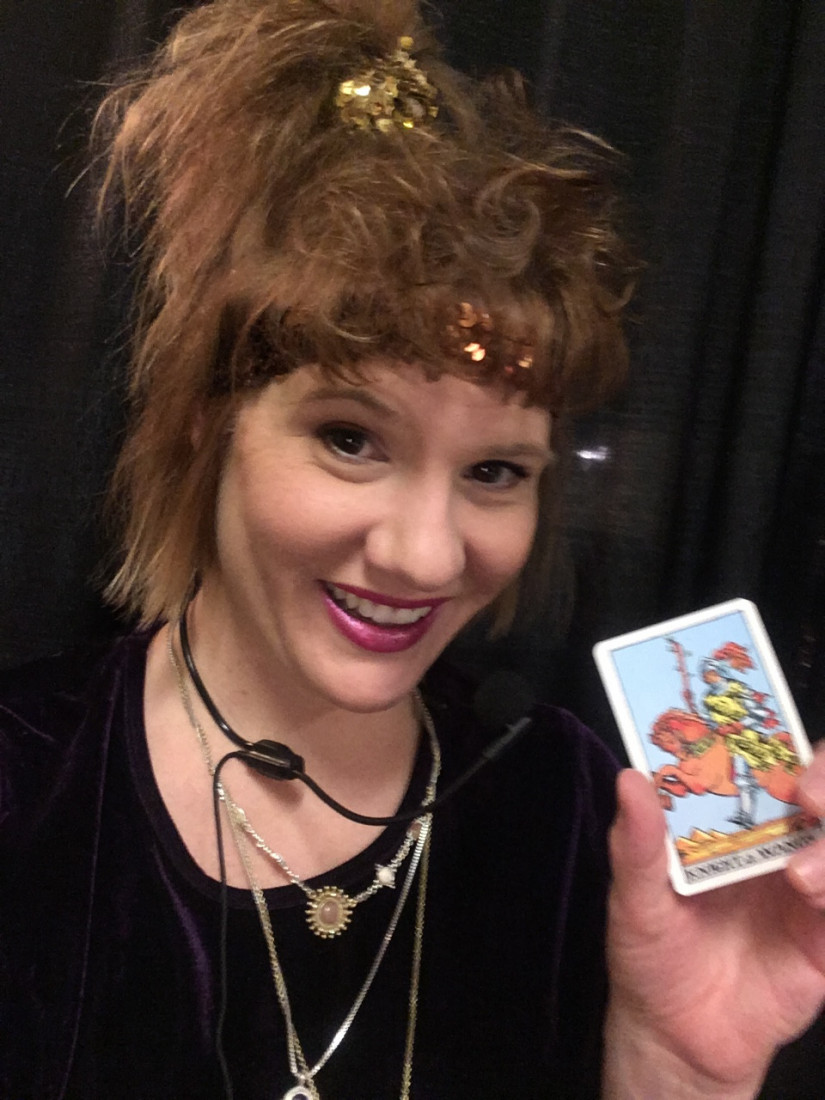 Meet Jessica! She's a fortune teller with a performance background. A true professional, she delivers messages to your party guests through her five card tarot reading format. Just read the reviews! The readings are fun, fast and real.
If you're looking for an upscale experience that delivers the perfect balance between festive party flair & authentic fortune telling, hire Jessica. Your guests will walk away from their readings with a renewed belief in magic!
Party readings last about 8 minutes each and are the perfect format for large groups, or intimate gatherings. Jessica dresses up to match your party theme. You can count on Jess to make it memorable. Book today!

We invited Jessica to entertain at our 80s winter party and everyone loved her! She was on time, dressed the part, brought a voice amp so she could be heard clearly, and did a phenomenal job with the readings. Many of our guests were talking about her the day after! If you need a tarot card reader, she is your girl!

All my guest loved that you were there! Thank you for dressing the part!!

Jessica did a great job!

Our whole group was extremely pleased with the in-depth and accurate readings! It was great entertainment and gave us some lifelong memories!

Great addition to our Halloween Party

Jessica was a terrific addition to our adult Halloween party. She was on time, extremely professional & so easy to work with. Some of our guests were “freaked out” by her accuracy! We would definitely recommend her & will certainly hire her again in the future.

You were such a huge hit at our corporate holiday party. Thank you so much for being professional and on time. Everyone loved having you there! We will use you in the future for sure!

The hit of my daughter's 13th birthday!

SO happy that Jessica was available to read tarot for my daughter's 13th birthday with her 10 friends. All the girls LOVED their readings and found them to be entertaining and crazy accurate! Jessica was very professional, prompt, and so sweet with the girls who had never had readings before. I would HIGHLY recommend Jessica, and plan on using her again in the future.

Hi Angie,
Thank you so much for your review!
I particularly enjoyed this event because the girls were such a joy! Young people have unique challenges during adolescence and receiving the gift of a tarot reading provides some fun insight during those times of fast growth and change. I think the girls all have fantastic futures (all bright young ladies) and I hope to work with you again!
Thank you again!
Sincerely,
Jessica

I just had to circle back and give Jessica a review....
Jessica did a tarot reading for me at The Annoyance Holiday Craft Fair. Going into the reading, I was stuck in a dead-end job making very little money and applying for new jobs was proving incredibly unfruitful. I've never had a reading done before and was a little skeptical at first, but I wanted to give it a try and Jessica was so friendly and approachable... Getting a reading from her was like a gentle conversation. I asked Jessica to focus on my career trajectory and she took her time explaining each card to me. She told me that it was a very positive reading and that regardless of how things unfold, I would be successful in my career.
Fast forward to today: I got offered my ideal job, making more money than I thought I would, and I'm able to work from home 3 days a week! Just weeks ago I was completely miserable but Jessica gave me hope for a future that a couple months later came true!

Thank you for posting your review Theresa! I remember your spread from The Annoyance and it does not surprise me that you got a new job!!!! Thank you for your review! Hope to read for you again :)

Jessica was absolutely fantastic.
She came and did readings for 7 women, and each one walked away with so much knowledge and insight. Everyone took something personal away from their reading, and they all really felt that they got a lot out of it.
Jessica was professional, incredibly insightful and also kind & patient with everyone, as they digested the information they we were getting and helped talked through questions.

I would highly recommend Jessica and hope to have another event I can have her join again.

Hi Ashley!
I was so excited to have an opportunity to work with a smaller group so I can do more extended readings.
This was a fantastic event! Thank you for partnering with me!
Sincerely,
Jessica

Everyone enjoyed their readings with Jessica. She was professional, on time, prompt, warm and friendly. People said her readings were right on the mark and her readings added a special dimension to the party she was hired for. Highly recommend Jessica.

Miriam,
Thank you so much for writing about your experience! This was such a fun event in Evanston, IL and I look forward to partnering with you again in the future!
Sincerely,
Jessica

THE BEST READING I'VE EVER HAD!

Jessica was so polite and insightful. She saw what was going on in my life without me having to say a word. She knows what she is talking about. She was so sweet to me. She even spent some extra time with me to explain how to do my own readings at home. It was brilliant and absolutely worth it.

Jessica was great! Our guests loved her!

Whenever possible, please setup a quiet space away from loud music for the Tarot readings to take place.

Guests sometimes lineup for readings, but generally the flow is manageable.

For bookings over two and a half hours, Jess takes a restroom break halfway through.

Spiritual Awakening & Tarot
In 2010 Jessica Wilcox underwent a Kundalini (physical/spiritual/esoteric) awakening. She has been immersed in Tarot and personal growth ever since. Born with Synesthesia (the ability to see colors in words, visualize time as a picture, & view the human aura), Jessica has always possessed a unique view of reality. In 2015 she traveled to Abadiania, Brazil to receive a spiritual surgery from the world renowned psychic healer, John of God, at which time her creative blocks were removed by the spiritual entities who work through him and her mediumship abilities increased. Upon return from Brazil, Jessica became a certified Reiki practitioner.

Background in Performance
Jessica has been a comedian and writer for over 15 years! She is a graduate of Second City, The Annoyance, and iO Chicago improv programs.
Jessica is best known for writing and directing a full length musical comedy titled Girl Jesus, Resurrected & Back to School, which was produced at The Public House Theatre in Chicago (read the review here). Jessica is an unconventional comedian who has performed in various solo sketch shows, danced in Burlesque is More at The Annoyance Theater & Bar, and has directed a series of student sketch shows at iO Chicago (Monday Night Live).

Jessica feels incredibly fortunate to be doing tarot readings for individuals and groups!

Please provide a table and two chairs for the readings to take place.

Please provide a small table and two chairs for readings.

Brooke F. said “Amber put on an AMAZING performance at The Chattanooga Times Free Press Water for Elephants movie premier. She was great to work with. She took minimal…” 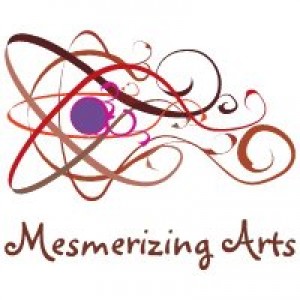 Lisa C. said “We had such an awesome experience with Alex and Travis!! Alex was such a great teacher. She took the time to teach a wonderful hula dance and we all had…”

Tracey K. said “WOW! Captain Jim is Fantastic! He came to one of my senior citizens resource luncheons in April 2013 and performed a great magical illusion routine! Jim…” 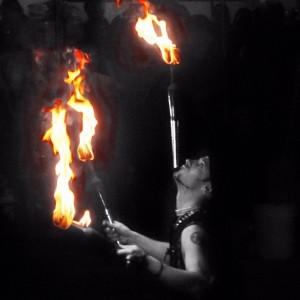 Debbie M. said “we were thrilled with all the entertainment Gig Salad provided us. We would use them again.”