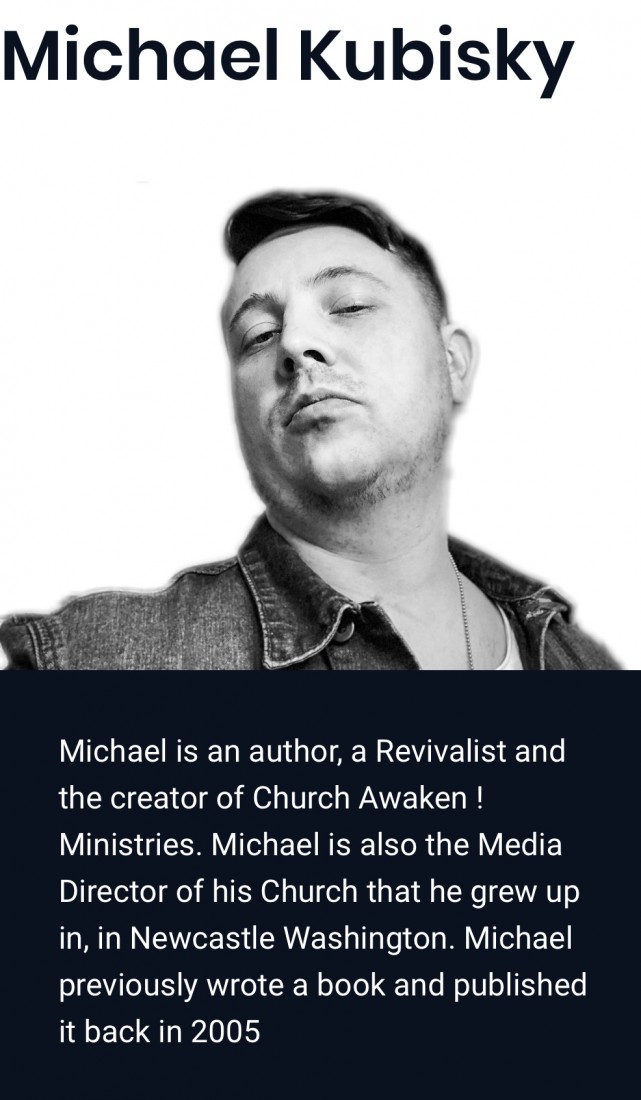 Michael Kubisky is an author, revivalist and speaker born and raised in the Seattle Washington area, currently residing in Tacoma Washington with his Wife Heather and his son and daughter. Michael wrote his first book a while ago and now is in the process of writing his second entitled “The Cookie Cutter Church.” Michael’s heart is to see the church awaken and the church to create atmospheres where the God shows up (the mainifested presence of God) instead of a place where people just show up. Michael believes that once the church grasps the Holy Spirit and gets on board of what God is doing, awakening can happen. Michael’s vision is to see people encounter God.

Be the first to review Author Michael Kubisky

This is funny, I have to be honest with you.. When I speak I allow the Holy Spirit to do what he wants and let him speak through me. You can expect God to have his way. I will preach about how God can move and how we can allow him too. At the end of the service I will allow a time for healing and a time for salvation.

Michael Lee Kubisky is a product of the Northwest and Seattle area. Michael was born at University Hospital in Seattle Washington to his father Robert and Mother Carolyn Rogers Kubisky a woman who was never able to have children after suffering from a kidney disease called good pastures syndrome, as well as my brother was also born in 1988 at Valley Medical Center in Renton Washington.
Michael grew up in the church with his family and was involved in a Christian Scouting program called Royal Rangers where he was taught and learned many camping ⛺️🏔🔥 and life skills. Michael also was involved with the church media team and ran the cameras. He was involved with his youth ministry where he met his wife Heather. Michael is the author of the book “The Attractive Christian, Looking into the hearts of believers” which he wrote and published in 2005. Michael and Heather have been blessed with two wonderful children, Jayden who is 11 and just started middle school and Lilly who is 7 and named after Michael’s Grandmother who passed away in 2009. Lilly is in second grade.
Michael and Heather and family make thier home in Tacoma Washington. Michael is the head of Church, Awaken! Ministries formally Contagious Ministries and also is the Head Media Director for Seattle Revival Center and creator of (link hidden)

No slides needed. Possibly a few pictures might be shown. A possible promo video might be shown as well, Church or venue would need a projector and sound to view. LIVE-STREAMING & TV IS OKAY!