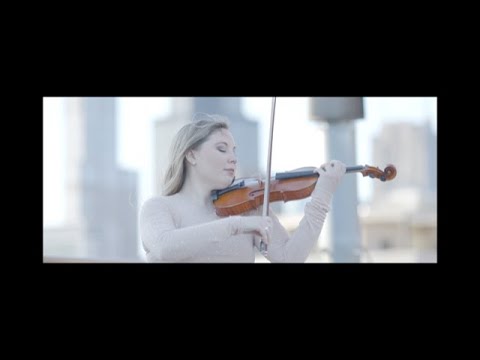 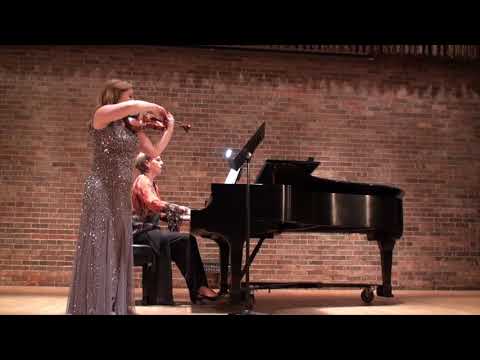 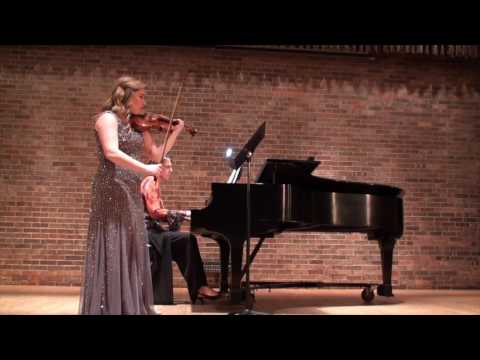 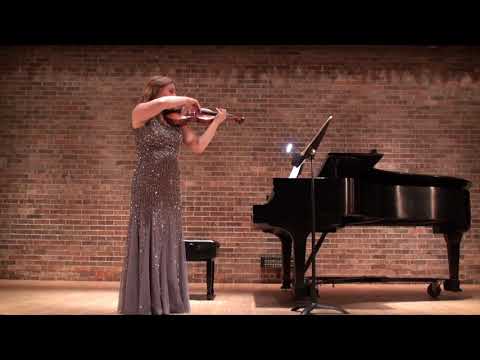 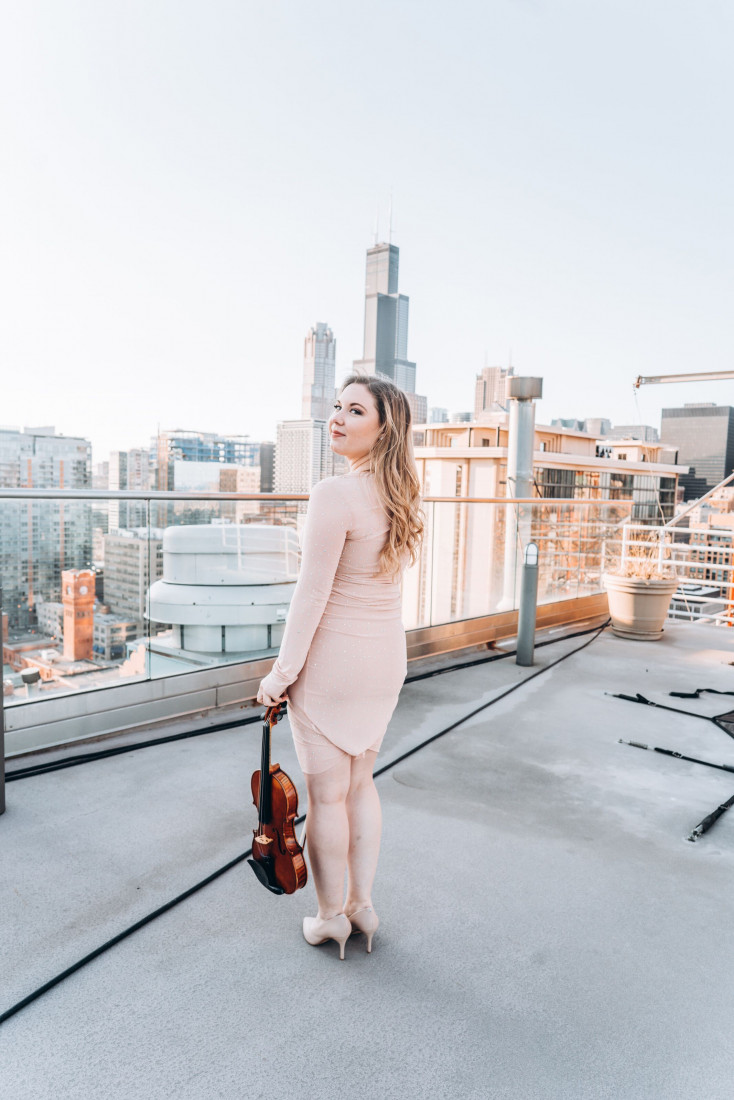 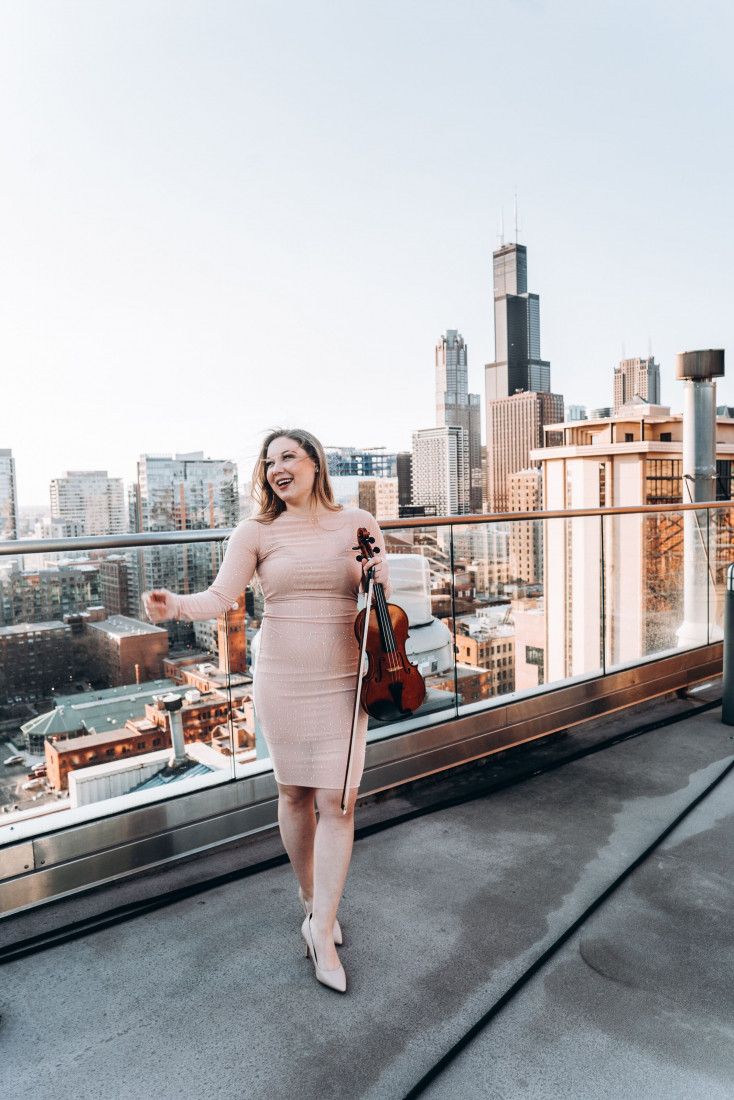 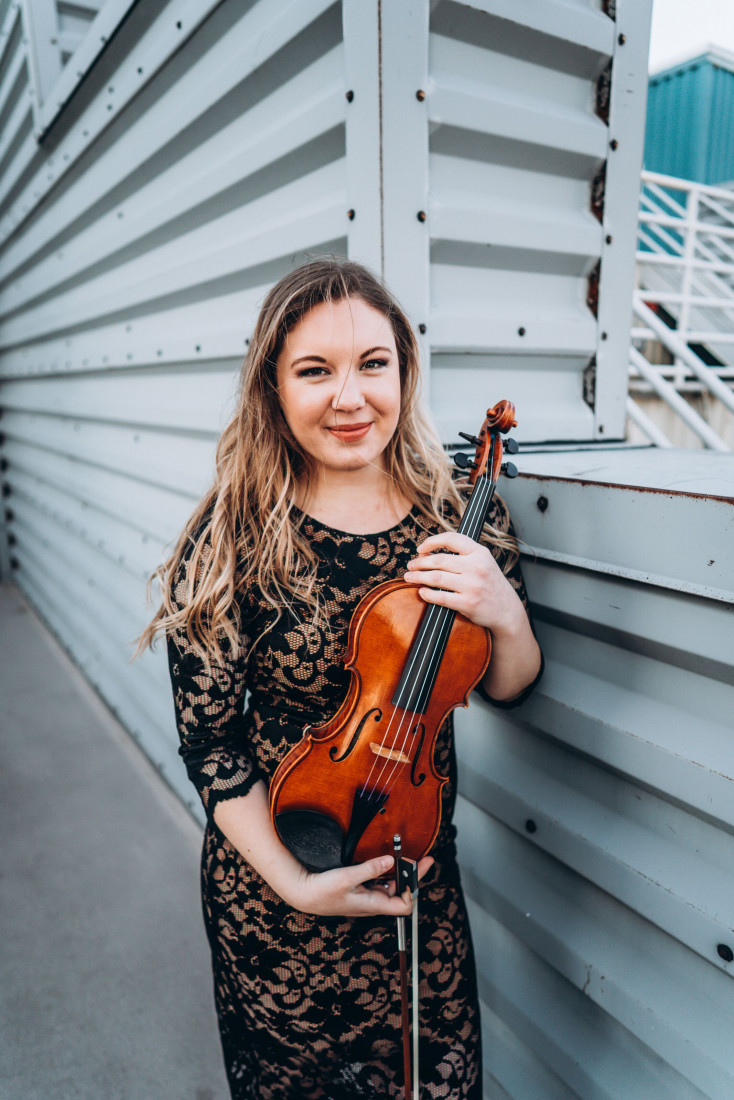 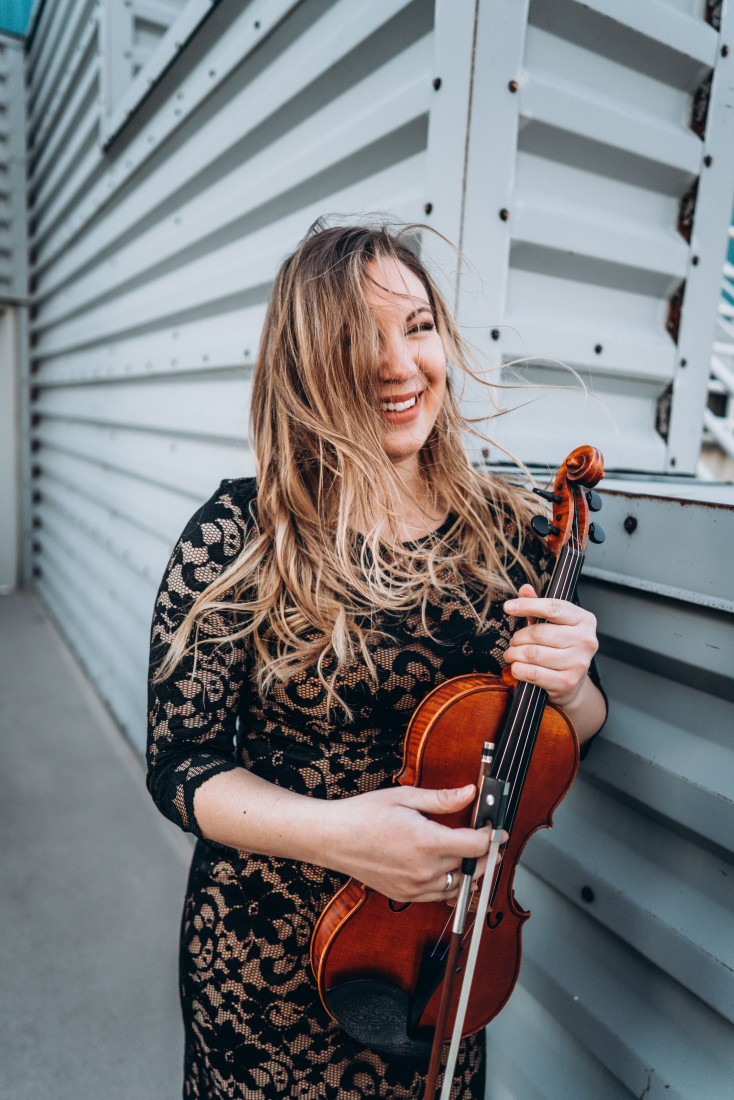 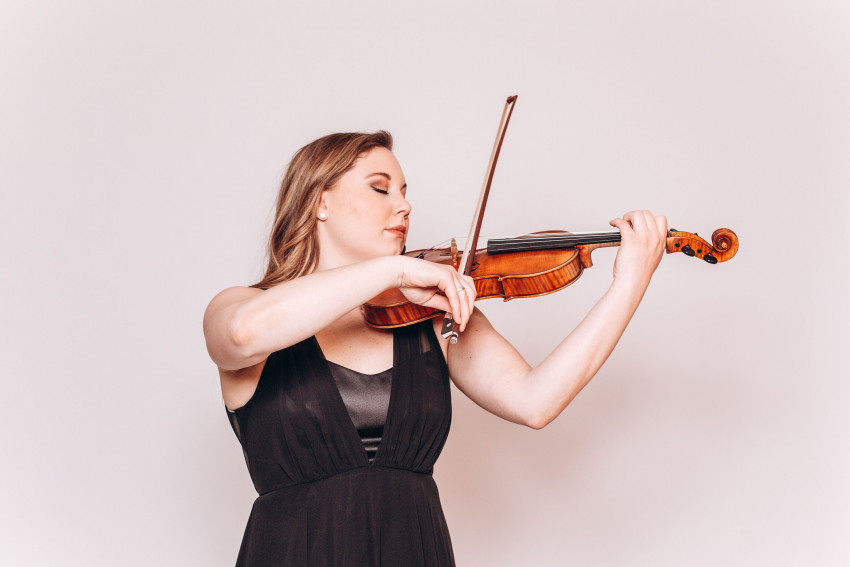 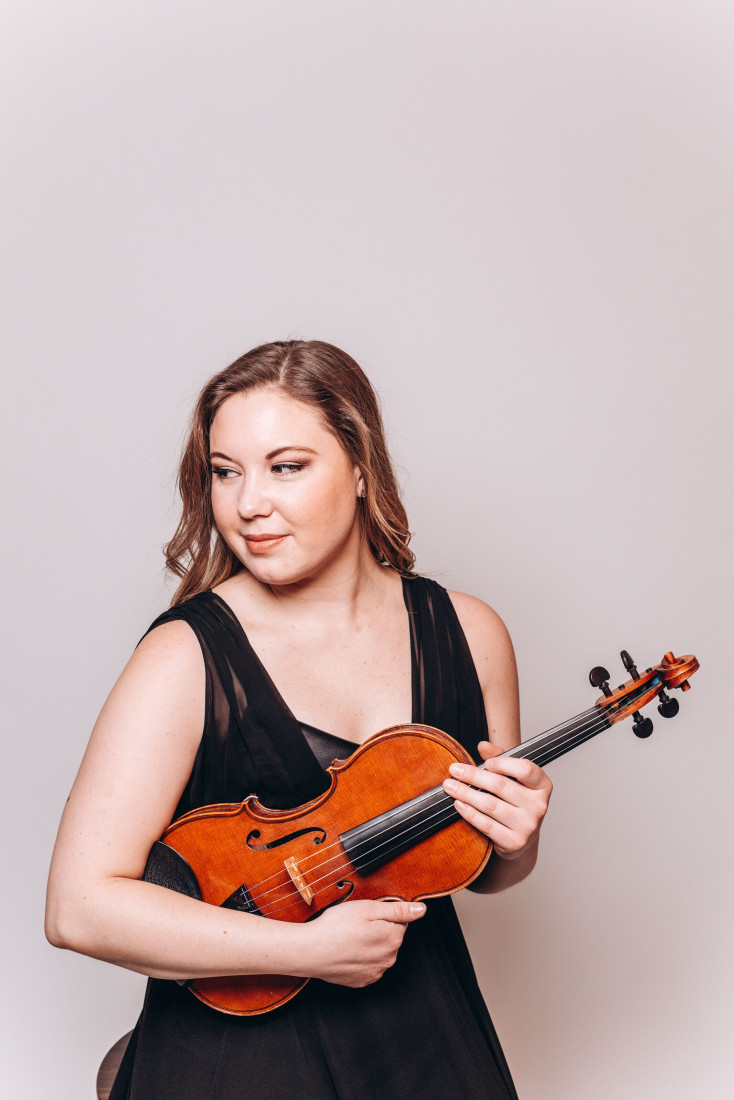 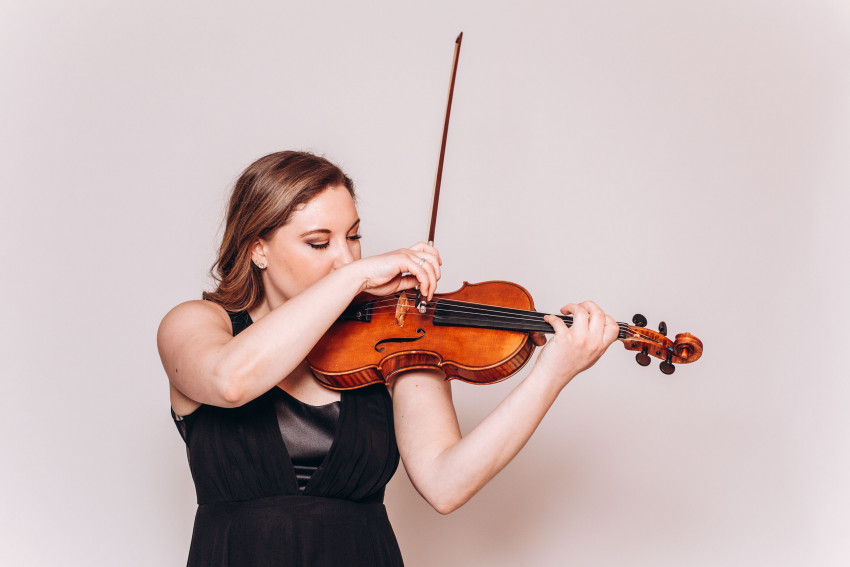 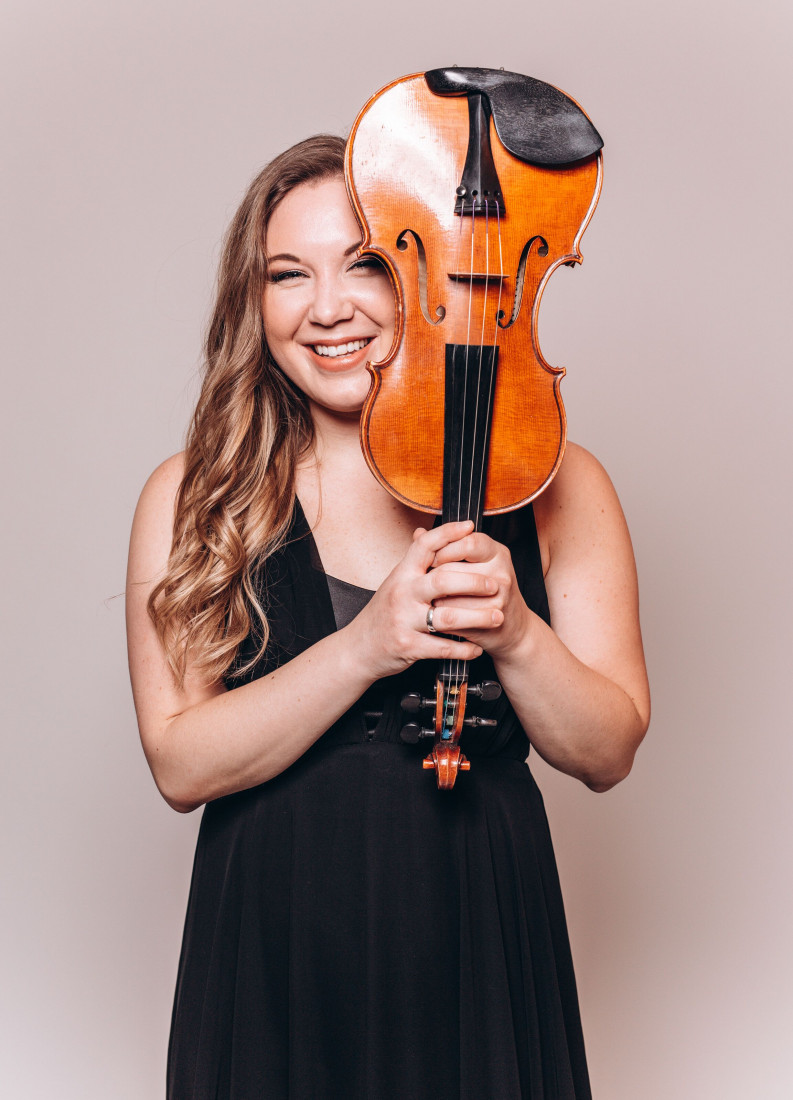 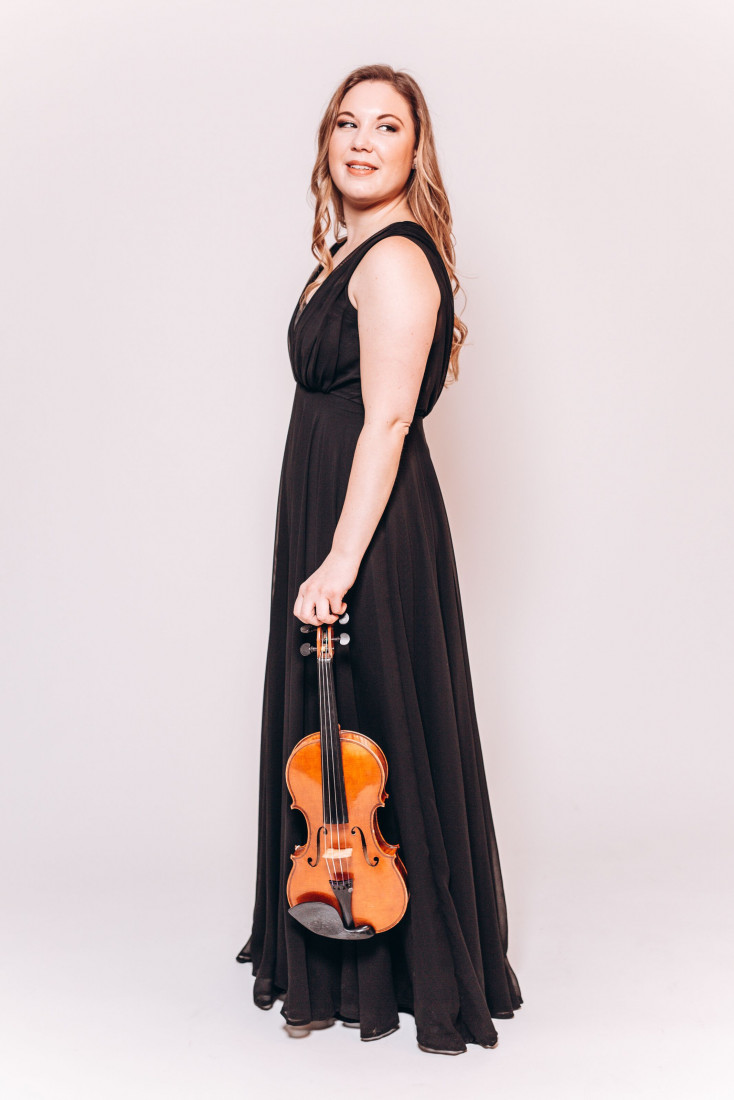 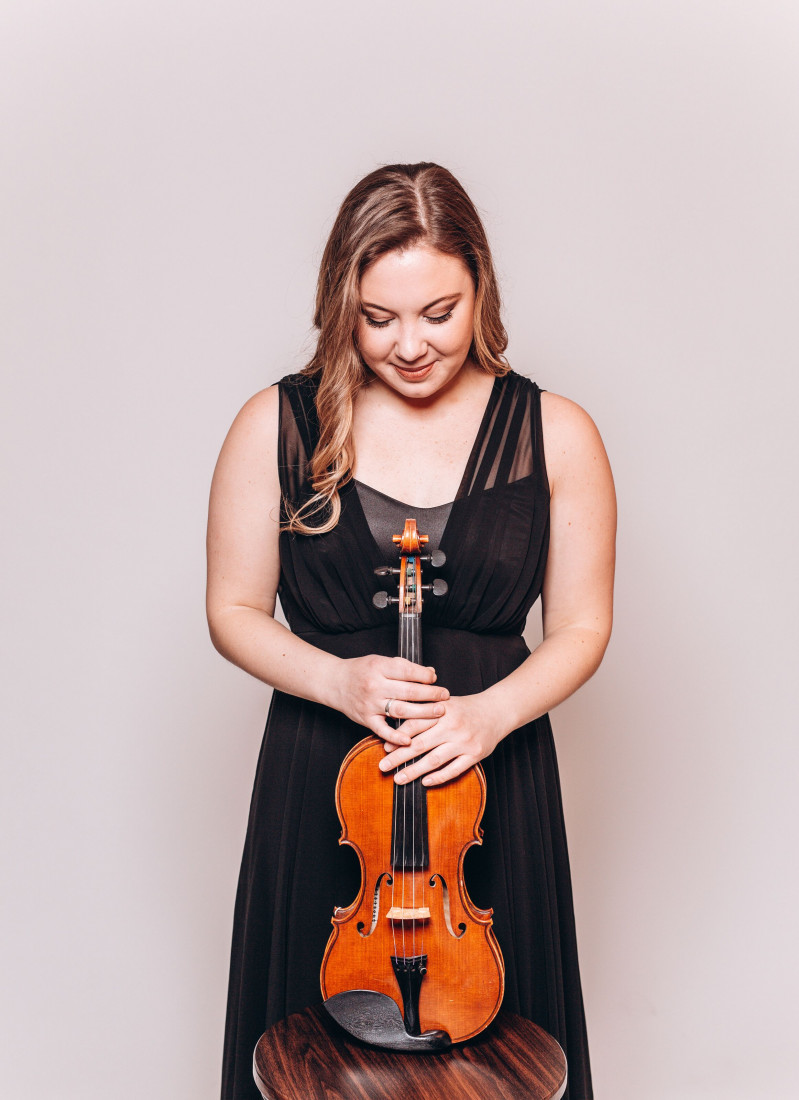 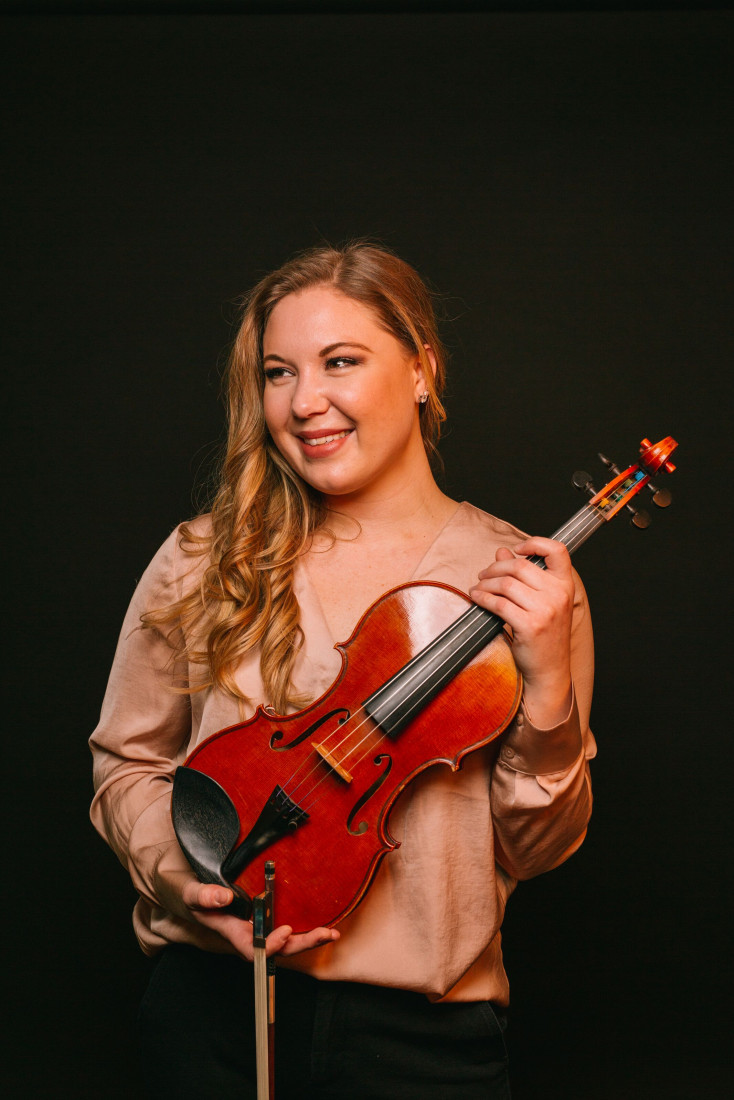 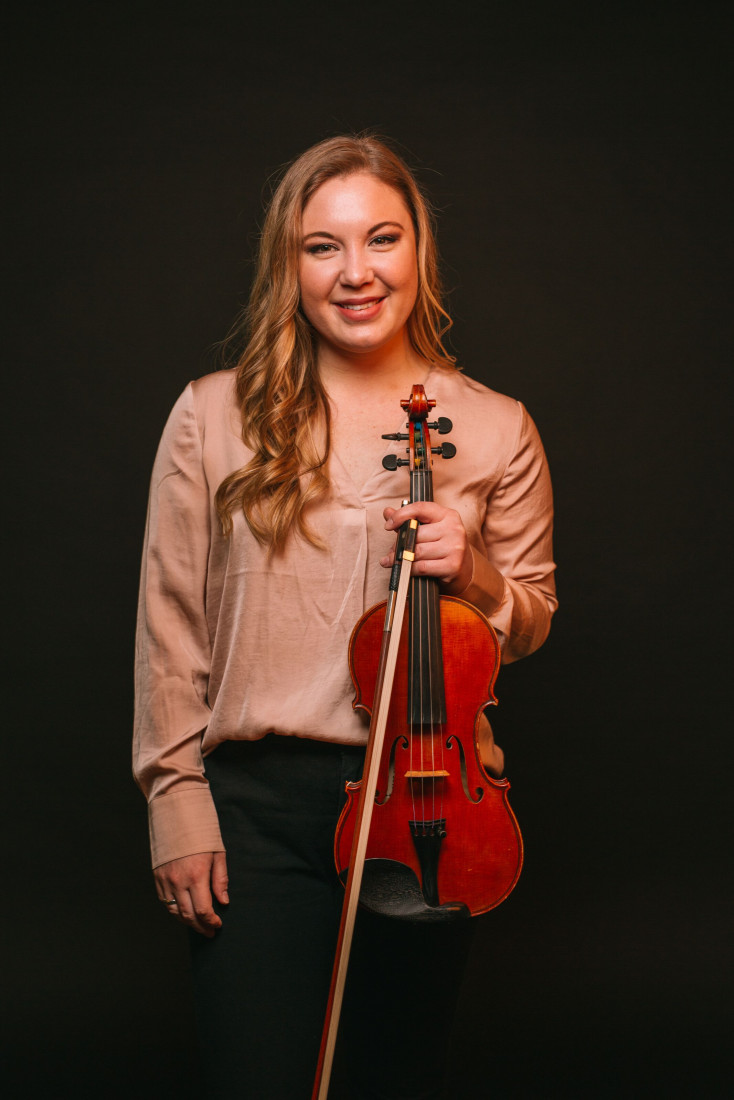 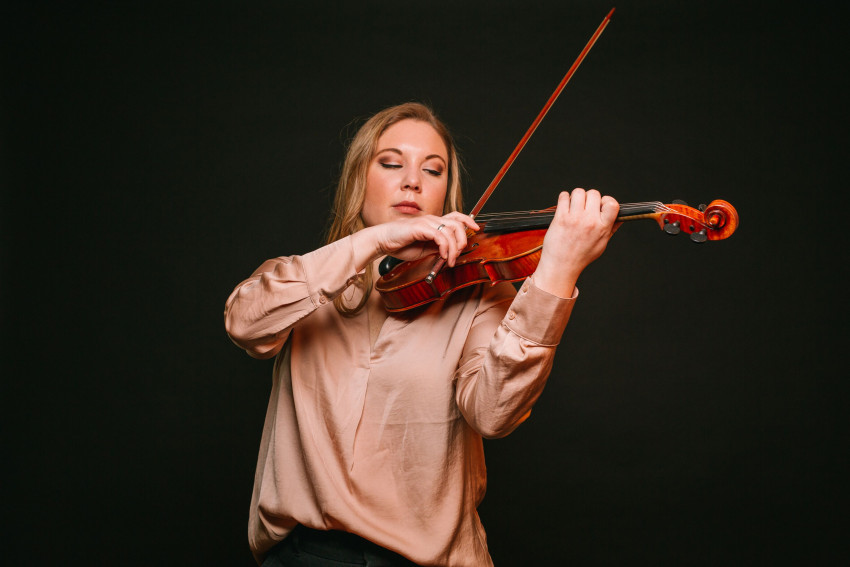 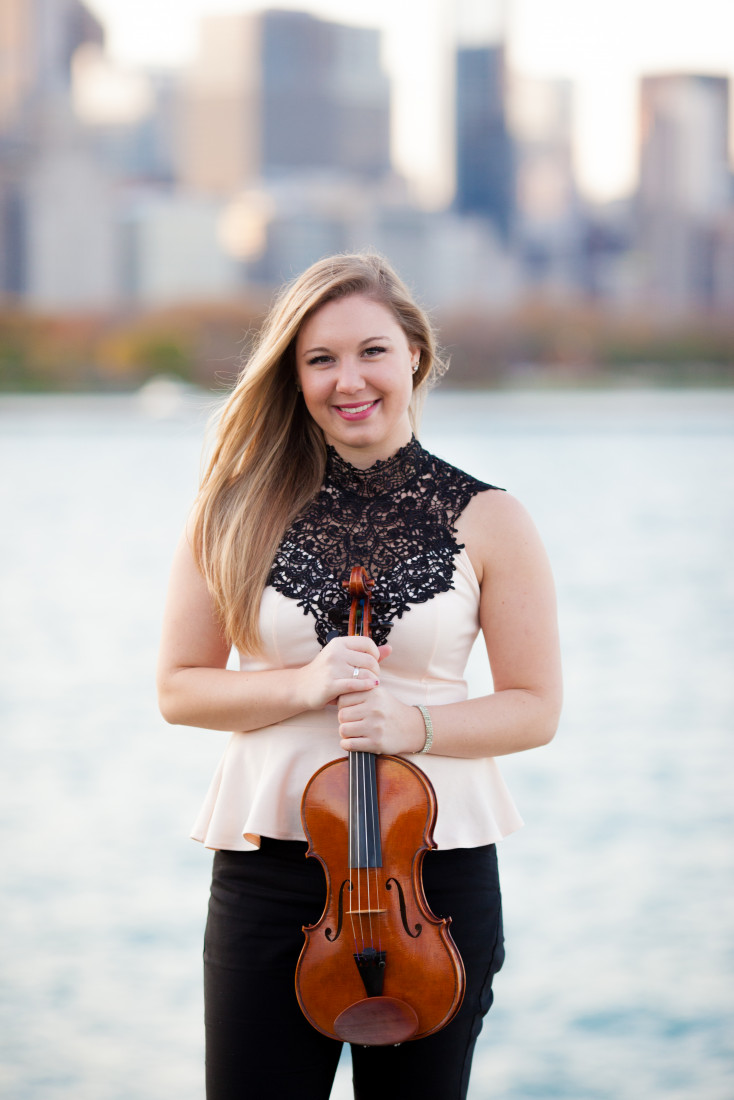 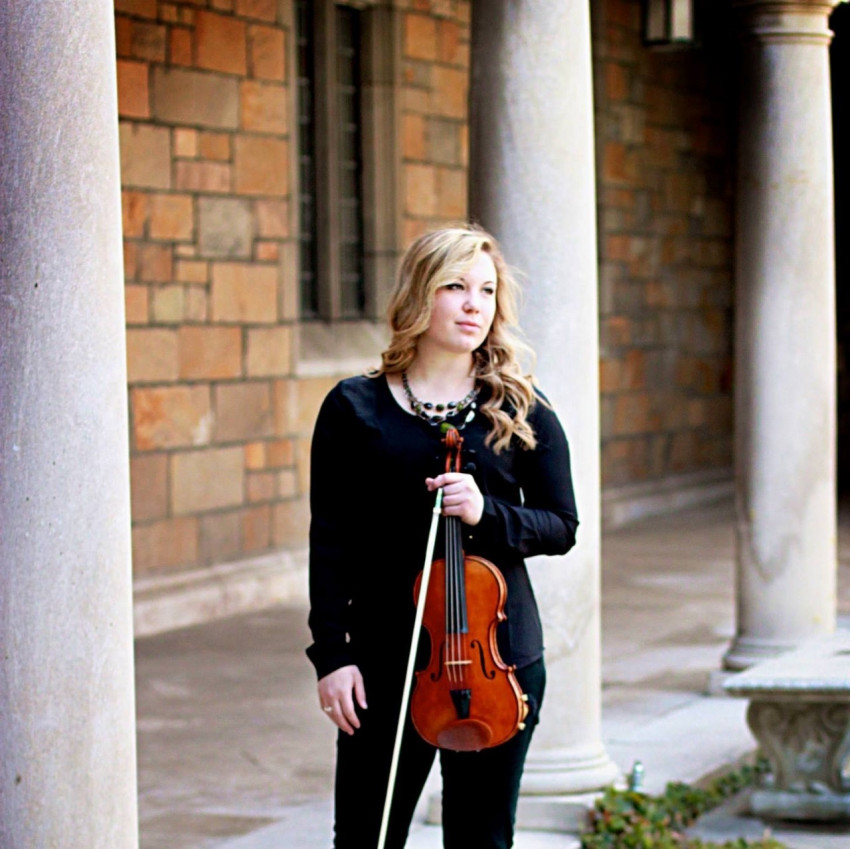 Anna Piotrowski brings a high level of experience and professionalism to any event. In her 23 years of playing the violin, she has had opportunities to perform all genres and styles of music. She can accommodate any song request you may have, and can perform as a soloist or as part of an ensemble (string duo, trio, quartet, etc.). Anna sincerely enjoys being able to cultivate the atmosphere you have in mind through her music, and looks forward to working with you on your vision!

Anna was absolutely wonderful to work with. She was easy to communicate with and her performance was perfect. Can't recommend her enough! Thank you Anna!!!

Thanks so much, Camden! It was a pleasure to be able to add music to your proposal. It was such a lovely location and idea. Best wishes to you both!

Amazing - added elegance to our ceremony!

Anna was phenomenal and added so much elegance to our ceremony. She was extremely responsive which helped a ton with planning. As someone who is not familiar with wedding music or how things should flow, she walked us through this and helped us figure out the perfect ceremony music for our wedding. I couldn't have asked for better music on our big day!

Thank you so much! It was a pleasure to perform for your wedding and I’m so happy I could add something to your special day. It was a beautiful venue and ceremony! Best wishes to you!

Anna and her cellist partner (I don't recall his name) performed for our wedding on Oct 24, 2020 at The Zachary Hotel balcony.

From start to finish everything was smooth sailing with Anna. I discovered Gigsalad and sent out my request, within minutes Anna replied with her availability and a very reasonable offer. After listening to her demo video I knew she was the one for our wedding!
We specially requested Metallica - Nothing Else Matters (long live metal 🤘) for our procession music and they killed it!
I will definitely book Anna again for future events.
Thank you so much for making our ceremony whole.

Thanks so much, Rachel! I had a blast playing for your wedding (especially with the Metallica request 😁) and you were so easy to work with! Best wishes and congratulations again.

Anna was an incredible addition to our wedding ceremony, playing traditional & modern selections throughout our special day. She even added personal requests throughout the ceremony that were learned just for our occasion...Anna was very responsive, professional but above all, talented in her music. Highly recommend Anna for anyone’s special occasion!

Thank you so much! It was a pleasure to provide music for such a special event. Congratulations again on a beautiful day!

Amazing for our wedding proposal!!

Anna played the violin during our wedding proposal. She was so professional, accommodating and easy to work with. The music was so beautiful and made the whole experience so special. She played the exact songs I requested and it sounded amazing. Highly recommend her for your special occasion!

Thank you so much, Ashley! It was an absolute joy to work with you and be able to perform for such a special occasion. So happy for you both - congrats!

Anna is an incredibly talented violinist!
We hired Anna to play violin during the ceremony at our wedding. We were initially only going to have the DJ play instrumental music during our ceremony, but ended up deciding to have a violinist instead and it was the best decision! We still had the DJ play some piano back tracks, but Anna blew away our guests. One close friend came up to my mom after the ceremony and said "as soon as the violinist touched her bow to the instrument, I had goosebumps from my feet to my head." Don't hesitate to hire Anna! Nothing quite compares to the "live violin" flare :)

Thank you so much! I was so happy to be able to perform for your wedding and am happy to hear it enhanced the event :)

Anna was so easy to work with. Every song I requested she was able to play, she is super responsive and the wedding was absolutely perfect. Highly recommend using her if you are looking for a professional, elegant & perfect wedding ceremony!

Thank you! I truly enjoyed being able to perform at your wedding. Best wishes to you!

Anna was very accommodating to my relocation plans due to COVID closure at original location! The set up was perfect along the River. We pulled up in Kayak and listened to our wedding song being performed by Anna. Such a beautiful version. Our first experience with a Violinist and is was perfect! I highly recommend Anna! Thank you for being the highlight of our anniversary celebration :)

Thank you! I had a great time performing for you!

Thanks so much, Lana! I had a great time performing at your wedding. Best wishes to you!

She was very sweet and professional!

Thank you! I had a great time playing at the Valentines Day event and loved hearing people sing along with songs they knew :) best wishes to you!

I am writing this review to show my deepest and most sincere gratitude for Anna's performance at our wedding on November 16, 2019. She played our reception cocktail hour just beautifully and many of our guests commented on how wonderful the experience was for them. It truly took the event to another level of class and sophistication.

This was my first experience with the GIG Connection and we have already spoke about it to our friends. We will definitely work with her again!

Thank you for everything!
AJ Jennings

Thank you, AJ! I had a great time performing at your event and wish you all the best.

If I am hired to perform at your event, you will have a polished and professional performance either as a soloist or as part of an ensemble. I can perform any genre of music and can accommodate specific requests!

Anna Piotrowski is an active performer and educator in the Chicagoland area. She is currently a member of the Civic Orchestra of Chicago, as well as a full time Strings Teacher at St. Benedict Preparatory School in Chicago. Other professional engagements include performances with the Fort Wayne Philharmonic and New World Symphony, as well as opportunities to perform in theatre productions, studio recording sessions, weddings, and corporate events. In addition to her teaching position, Ms. Piotrowski has been a guest adjudicator for Solo and Ensemble competitions and maintains a studio of private students.

Ms. Piotrowski holds a Bachelor of Music in Violin Performance with a minor in Performing Arts Management from the University of Michigan, where she studied with Aaron Berofsky. She continued her studies at DePaul University as a student of Ilya Kaler, where she received her Master of Music in Violin Performance. During her time in school, she held title chairs with the Dearborn Symphony and the Kankakee Valley Symphony.

If performing outside, I require cover for protection from direct sunlight or precipitation, as both are harmful for string instruments.