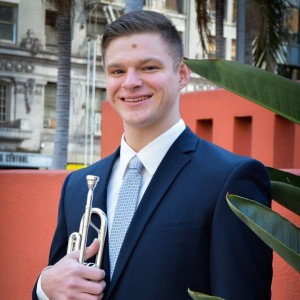 Aaron Woolley is a Los Angeles-based trumpet player and educator. Aaron has studied with David Washburn, Tom Hooten, Jens Lindemann, and Tim Saeger. Aaron received his B.A. from the University of California, Los Angeles and his M.M. from Azusa Pacific University. Aaron teaches and gigs with multiple groups.

As a freelance artist, Aaron can be heard on recordings such as “Room 3A”, a Japanese TV drama, “Song of Hope” with Jens Lindemann, and the “Miners’ Hymn” a film on the history of coal mining in Northern England. He has also performed world-premieres at Royce Hall, and has opened for the Rolling Stone’s 50th anniversary tour. Aaron also performs and tours with the Alias Brass Company.

Be the first to review Aaron Woolley